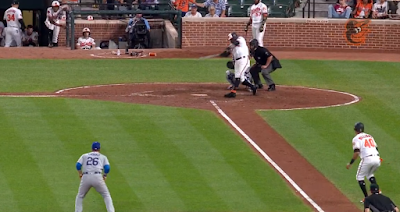 When Jonathan Villar took Caleb Ferguson deep at 9:15 p.m. ET on Wednesday night at Oriole Park at Camden Yards, baseball history was made.

Villar’s three-run blast -- which gave the Orioles a 5-2 lead against the Dodgers in the seventh inning -- was the 6,106th home run hit in MLB this season, surpassing the previous record of 6,105, set in 2017. These are the only two seasons in history with at least 6,000 home runs hit.

After the Orioles' 7-3 victory, Villar was told of the record and the Hall of Fame's request for the bat that hit it.

"That's not everyday that happens, that only happens one time," he said. "I feel excited because that's very important, not only for me but for the team. My bat is going to the Hall of Fame. ... I am going to have that my whole career. That's unbelievable!"

In 2017, the record-setting smash was hit by Alex Gordon, who clubbed the 5,694th homer of that season off Ryan Tepera of the Blue Jays. That topped the previous record of 5,693 from the 2000 season. This time around, it was Villar, who has gone yard 21 times this season.

About 16 minutes earlier in the evening, the 2017 record was tied in Houston when Marcus Semien hit his 28th homer of the season off Jose Urquidy of the Astros. After Semien's record-tying blast, Gordon was at the plate for the Royals a little more than 1,000 miles away in Chicago with a chance to set the record once again, but he grounded out.

Here’s a look at some of the records that have been set so far, and what else is on the horizon before the regular season wraps up.

The season got off to a homer-happy start on March 20, when the Mariners homered in their Opening Day matchup against the A’s in Japan. Seattle would go on to homer in 20 straight games total, setting a record for the most consecutive games with a home run to start a season. The previous mark had been 14 straight, when the 2002 Indians began their season.

That wasn’t the only home run streak record to fall. On May 26, Gleyber Torres of the Yankees hit a home run at Kansas City. The Yankees would go on to post a 31-game home run streak, surpassing the prior record of 27 straight games.

Other team records we’ve seen fall? The Twins broke the single-season home run record for any franchise when they hit their 268th on Aug. 31, passing the 267 the Yankees hit last year. But New York hit six on Tuesday night to tie Minnesota at 276. With the Yankees rained out on Wednesday night, the Twins regained the lead with one homer in their loss to the Nationals. It looks like this race will go down to the season's final day.

The Twins and Yankees aren’t the only clubs to set a franchise single-season home run record. The Padres, Dodgers and Astros have done so as well, and the Braves are four away from their franchise mark of 235, set in 2003.

Pete Alonso and Jorge Soler have already set their teams’ single-season individual records for home runs. Alonso's 42nd set the Mets’ record, and he’s up to an MLB-leading 47. In the process, he also set the National League rookie record, previously held by Cody Bellinger, who hit 39 in 2017. Soler set the Royals’ record with his 39th and now has 43, the first 40-homer season in Royals history.

Bellinger, with 44 home runs, is four shy of Shawn Green's Dodgers record for a season. Mike Trout (45) is two behind the Angels record held by Troy Glaus.

The biggest league-wide record, of course, is the all-time season total. But there have been parts of that record building since Opening Day.

In May, there were 1,136 home runs across the Majors. That set the record for most home runs in a calendar month, surpassing the 1,119 from August 2017. That record stood for a grand total of a month before June broke it, with 1,142. Then August smashed it again with 1,228.