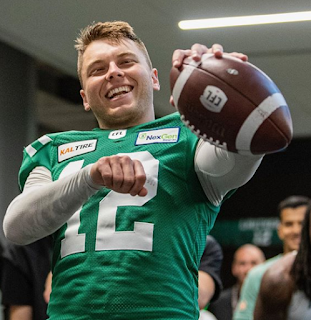 --Oh Brett Lauther, your birth certificate may say you are from Atlantic Canada, but after what we saw at the Labour Day Classic, you are Saskatchewan through and through my son.

Running down the field to get into Pil Country and celebrate with the fans by chugging back some beer and crushing some cans after etching his name into the latest chapter of the Labour Day Classic was so Saskatchewan!!  The only thing better would have been had he hopped into a farm implement and drove down.  Whatever!  The bottom line is the Riders made it six in a row beating a Winnipeg team that just about stole one in what made for a dramatic and exciting afternoon at new Mosaic.

When speaking with Rob Vanstone at the half, I said everyone had gone into the week talking about how the Bombers didn't have Matt Nichols and Andrew Harris and were thus weakened.   Yes they were, but on just one side of the ball.   Willie Jefferson, Adam Bighill, Winston Rose and others still make up a very formidable defence and it showed for most of the game----until the final drive.

Cody Fajardo and the Saskatchewan offence turned that Bomber D into roadkill on the final drive.  They simply could not stop them.   Five passes and four William Powell runs took the Riders from their own 5 to the WPG 20 making it a chipshot for Lauther.  What a statement drive by a quarterback who continues to drive up his worth and make this team a winner.   That was a drive we might all remember when the season ends.

--We saw the good and yes we saw the bad from Chris Streveler on Sunday.  Can some Rider fans please tell me why they think this guy would look good in green?  Yes, he made some throws and made some plays with his legs, but the inconsistency is maddening.  He simply can't make the throws that are needed.  One could argue Fajardo's heroics wouldn't have happened had Matt Nichols been in because he would have made some throws Streveler didn't.  He certainly wouldn't have thrown the pass that Loucheiz Purifoy intercepted.   Nichols doesn't bring the pizzazz Bomber fans want him to and I'm not his biggest fan either, but he is a much better option.  I wonder how much Winnipeg fans will miss him as we go on.   Sometimes you don't know what you have until its gone.

--Fajardo said on his game-winning drive you can give all the credit to Stephen McAdoo for making the calls--especially the runs.  Would that be the same Stephen McAdoo that most everyone in Rider Nation wanted out of town on the next train that rolls by the stadium last year and in the off-season.? The McAdoo hate for the most part is gone. When you don't have the right guy pulling the trigger, you can't succeed and that is what happened last year with Collaros and Bridge.   That being said, it confuses me as to why the Riders when they have the ball at the 3 try to get fancy when it is time for the hoggies to do what they love and that is run block.  It was maddening to see the Riders not hand the ball off to William Powell to get a TD late in the first half thus settling for 3.  Get down and dirty in those situations. It's OK!!

--Its been said before by me and others and it happened again Sunday.   Can the braintrust that is the Saskatchewan Roughriders simply go back to the retro look that they trot on the field each and every Labour Day.  That is the look this team should have complete with the logo for every game!  How do we make this happen!

--Mike O'Shea is upset with Craig Dickenson for a play in which their long-snapper was knocked out of the game.  This is the same Mike O'Shea who defended Jackson Jeffcoat after his blatant head-shot on Brandon Bridge at the end of last year's Western semi-final.  Tell me what the difference is Mike!

--From the Riders to the Rams and did they send a message to their competitors in Canada West Saturday night at Thunderbird Stadium.   As I said during the broadcast on 620 CKRM, Manitoba may have had a statement win by thrashing the Huskies in Winnipeg, but Rams head coach Steve Bryce just looked at that and said "hold my beer".

In the words of the legendary Ed Whalen during his Stampede Wrestling days,  the Rams beat UBC "from pillar to post". I have done a lot of Rams games from TBird Stadium with Frank McCrystal, Mike Gibson and Bryce coaching this team and what I saw Saturday was the best overall performance at that venue and one of the best I have seen from the team period.  (Oh yeah, did you really think the Rams would have had a good effort under Gibson anywhere----I digress!) 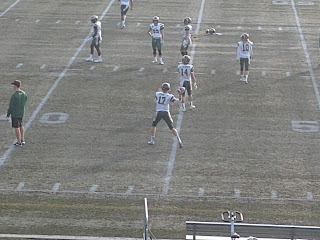 If anyone had questions about Josh Donnelly and how he will adapt to the USports game. you can put those worries to bed.  A 377 yard, two touchdown night was quite the season debut for the kid who is trying to become the next in a great line of Rams quarterbacks.  If that kid didn't wake up smiling from ear-to-ear on Sunday morning after what he did the night before than he should visit a doctor.  What a performance!

Defensively Josh White was all over the field as was Ryder Varga and Matt Moore.  It was an impressive performance from a group that knows they are better than the last place team they were picked as in the coaches poll.  They now have back-to-back home games against Alberta and the U of S on the next two Fridays.  Go check them out!

--As I landed at the Vancouver airport Saturday afternoon and turned my phone on, I received notification the Seahawks had traded for defensive lineman Javedeon Clowney. Correction, how they had stolen Clowney from the Texans!  I was shuddering at thinking at what the Seahawks were giving up for one of the top d-linemen in the game.  Two draft picks, a young back-up and an aging part-time starter?  I'll take that!  Like many of you, I can't wait for the NFL season to get going Thursday.  Now if I can just find out what Access is doing with Sunday Ticket!!

--Back to the CFL.  The two Monday games showed me the Hamilton-Toronto rivalry is still a rather intense one despite the records of the two teams.  That was good old-fashioned "we don't like one another" football while in Calgary, the Stamps showed when Bo Levi Mitchell is in the game they are that much better which shouldn't come as a surprise.

--While listening to NHL Radio on Monday, they were discussing a possible trade involving Patrik Laine.  The deal would see New Jersey send three first round picks and defenceman Damon Severson to the Jets for the RFA.  I find that to be highly unlikely, but if it happens, the Devils will definitely mean business.  As the days drag on, I think its more and more likely Laine has played his last shift in Winnipeg as the Jets will decide Kyle Connor is more important than the Finn.

--TSN celebrated its 35th anniversary this weekend.  For all the grief that TSN and Sportsnet take, they have brought many historic moments into our living rooms and have helped the profile of many sports and making some events larger than life.  Those who remember watching Blue Jays game on Wednesday nights when that was all we would get or the odd hockey game on a night other than Saturday know how good it is now when we can find sports on TV or the computer every night of the week.

--17 Canadians are playing in the NBA and only two of them are playing for Canada at the World Cup of Basketball.  Thanks a lot to the 15 who decided not to play. What the 17 are doing does far more for the sport in Canada than the Raptors winning the title last year.  Those 17 are who young Canadians playing the game are looking up to saying if they can do it, so can I.

--NFL fantasy drafts are going fast and furious with the season starting Thursday.  Hard to think Patrick Mahomes or Saquon Barkley aren't the top guys going off the board unless you are in a keeper league.   The long road to the Super Bowl starts Thursday and while many are excited to see the Riders doing what they are doing, many are also excited knowing the NFL is ready to occupy our Sundays for another season.


Usually sit in Pil Country, but I sat with my Dad for this game. I should have taken the old boy into Pil Country with me. What a moment that would have been. This team continues to surprise everyone and I love it.

Did Nill blow a gasket or three. The Rams absolutely destroyed the TBirds. Good to see!


A Richie Hall defense blowing it in the dying seconds. Tell me it ain't so.


It doesn't matter how you get the W, just get the W. Winnipeg wasn't good enough to get the W. Time for next week!

That was Richie's 'prevent defense'.
We saw it here for years and it cost us two points practically every time.

I haven't seen any McAdoo hate in the last six games. Oh wait!