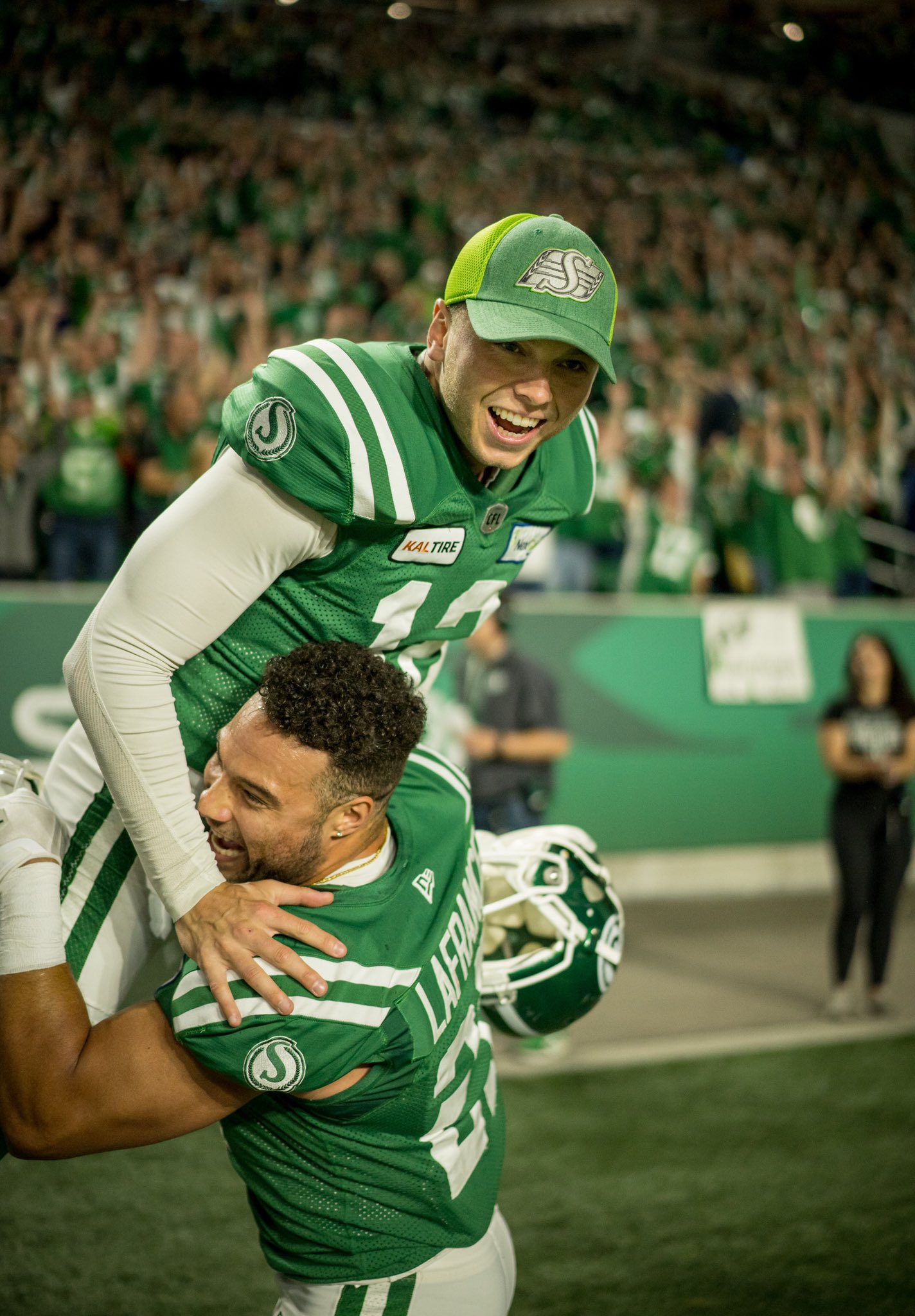 --Ugly, but entertaining!  That is how I would describe what went down at Mosaic Stadium Saturday night as the Riders took it right down to the wire for the 3rd time at home this year before getting the "W".

I don't know if Brett Lauther was thinking of taking another trip into Pil Country, but after a rough night for the usually reliable Rider kicker, he may have wanted to take a trip on the first rail car that passed by the stadium after missing a PAT and a makeable field goal.   I didn't hear it, but apparently Craig Dickenson didn't chastise Lauther after missing his FG saying it happens.  What a confidence boost for the kicker who rewarded his coach and his teammates by making the game-winner.  He said he owed it to everyone for the miss.  Bill paid young man!

--One of the things I saw and it has to be good news as the weather starts to turn is the fact the Rider run game is solid.  I'm not really sure why OC Steve McAdoo abandoned the run in the first half after the first two plays when William Powell gained 23 yards but he did.  He brought it back at the right time though and with the o-line opening up lanes, Powell could do his thing. That formula will be huge in a few weeks.

--Hats off to whoever produced the Rick Astley karaoke featuring the Riders.  Canada got Rick rolled and no one in Mosaic seemed to mind---except maybe Cody Fajardo who admitted after the game that was ugly with a smile on his face.  There have been some great vignettes on the scoreboard this year so whoever is doing that should be saluted.  Now if you can just ash-can the Jim Carrey yell when imploring fans to make noise (do you really have to do that with a supposedly football-smart crowd?) all will be good.

-- It was 80's night on Saturday with 80's music playing.  You can do that for every home game as far as I'm concerned  You can also dress the home team in their retro look.  It should be their permanent look.  Can we get the retro whites on the road before the year is over?

--If you didn't cringe when Shaq Evans got crunched on the game-winning drive, you must not feel pain. How did he manage to absorb that hit and keep possession?

--There is no "X" beside their name, but as CTV's Lee Jones stated on Twitter Saturday night, the Riders can't finish any worse than 4th in the West after Saturday's win meaning they have assured themselves of a crossover if that should happen again.  It looks like it will meaning its time to renew the East-West or one nine-team conference debate again.

--The Calgary Stampeders must have once again borrowed a horseshoe from their touchdown-racing horse on Saturday.  I think everyone thought Hamilton was going to walk into MacMahon and steal two points from the Stamps.  Tre Roberson sent the home crowd happy after leaping high to block the field goal.  ARRGHHHH!

--You can't tell me the CFL didn't love the two games played Saturday.  More of that is needed in a season where the game-play has suffered.

--I don't know what is in the water here, but man does this city produce quarterbacks.  Mason Nyhus and Josh Donnelly were spinning it Friday night at Mosaic as the Huskies throttled the Rams 44-9.  Nyhus was particularly good before having to leave with an injury in the second half.  Many good QB's have already come out of here and many are on the way.  It has to be more than just good coaching isn't it? Whatever it is, don't tweak with the formula.

--Mitch Marner has signed.  Did you know he signed?  Now, the Leafs propaganda machines have moved on as to who the captain will be.  A Stanley Cup win by Toronto and I may have to move to North Dakota so I can get ESPN because if you think both TSN and SNET are sickening now with their over-the-top Leafs coverage just wait until that day happens.  Hopefully it never does.   By the way, Marner is now making more than Nikita Kucherov and Connor McDavid.  Yeah OK!

Now that Marner has signed as have some other RFA's like Charlie McAvoy and Ivan Provorov, are we going to start seeing some of the other RFA's agree to deals before training camp?

--There could be a six-way tie for the National League wild-card spots.  That would be crazy!

--Not a good day for QB's in the NFL as both Ben Roethlisberger and Drew Brees went down.  The NFL can afford to have marquee QB's miss time unlike the CFL because there are so many of them.  The Super Bowl hopes of the Saints will take a big hit if Brees is hurt for a while after doing something to his thumb.

--How big was the win by Bianca Andreescu at the US Open last week.  More people in Canada watched the win over Serena Williams than people in the US.  Last I checked, the American population was far higher than Canada's!

--The SJHL's Estevan Bruins introduced some white jerseys on the weekend.  Did they thank MacDonalds for sponsoring them?  If you are going to be called the Bruins and have the same type of logo as the NHL team, you need black on that uni.  End of debate.  I feel sorry for whoever had to do play-by-play of the game when it came to seeing the numbers.

ya the Estevan Bruins need black pants. Too much white.


The singin with the Riders thing was soooooooo funny! Are the Riders going to put the full version on their website?

I am with you on the scoreboard telling people to make noise. For a fanbase that considers itself to be so knowlegeable on the game, why do we need to be told when to get loud. I think we know.

What bothers me at the game is the constant shots of fans. I want replays. I know fans are enjoying themselve, but I want to see replays. Am I the only one in that boat?

Mitch Marner signed? Man, that was quiet! Sarcasm off!


Those final two games against the Eskimos will determine 3rd and 4th in the West. Someone will cross over yet again.


The SJHL continues to be a joke. Did anyone see what happened in Melville on the weekend? Right out of SlapShot! Reggie Dunlop would be proud.


The goon from Yorkton got 25 games for that act.

Ya that idiot for Yorkton got 25 games for that ridiculous hit on goalie. So I would say justice has been served.