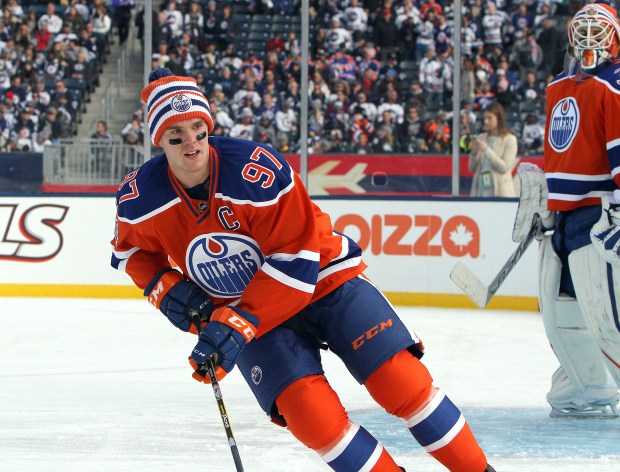 Connor McDavid said he supports management's decision to keep the core of the Edmonton Oilers roster intact for this season.

"I think the message was that if there was a move to be made, they'd make it," the Oilers captain said. "But obviously nothing too promising came up. That's good. You want to keep the team together."

After making the Stanley Cup Playoffs for the first time in 11 years in 2016-17 and reaching the Western Conference Second Round, Edmonton finished with 78 points last season, 17 behind the Colorado Avalanche for the second wild card into the postseason from the conference.

"Obviously we were a good team two years ago," said McDavid, who is entering his fourth NHL season after leading the League in points the past two. "Obviously the team last year wasn't up to our standards, and it's our goal to get back to our level."

Oilers general manager Peter Chiarelli told NHL.com on May 30 that he believes they can do just that.

"We're not going to do anything significant, generally speaking," Chiarelli said at the time. "We felt the year before wasn't an anomaly. We felt we'd made significant progress (in 2016-17) on a number of different levels and [in 2017-18] things went south on a number of different levels. We really don't want to throw out the baby with the bathwater here."

Chiarelli was true to his word, and the OiIers have been relatively quiet this offseason. They added depth at forward by signing free agents Kyle Brodziak and Tobias Rieder on July 1, and they re-signed forward Ryan Strome to a two-year contract July 6 after selecting defenseman Evan Bouchard with the No. 10 pick in the 2018 NHL Draft.

The Oilers got off to a sluggish start last season and could never recover. A 1-0 loss at the Arizona Coyotes on Feb. 2 was their sixth in a row and left them a season-high seven games under .500 (23-30-4).

Edmonton went 13-10-2 from that point to finish the season, a modest improvement that McDavid said he and his teammates can build on.

"There's just got to be a point in time where you get sick of losing and you just own it," McDavid said. "Guys came together. Guys were getting sick of the way things were going and wanted to get back to playing hockey the way it should be, get back to doing what you have to do to win.

"It was a good learning experience, obviously something we don't want to go through again."

"I'm very excited to bring those guys on," McDavid said. "Rieder, obviously with his speed and offensive play, he'll fit in with the centers we have. And Brodziak's been around so long and does things the right way.

"We're just looking to get some chemistry. It's funny we talk about it because it's been three years now … Just going to training camp and try to stay with each other."

McDavid, who had 108 points (41 goals, 67 assists) last season after he reached 100 (30 goals, 70 assists) for the first time in the NHL in 2016-17, is attending the Power Edge Pro Hockey camp this week, joining the likes of Detroit Red Wings forward Dylan Larkin and Vancouver Canucks defenseman prospect Quintin Hughes and his brother Jack Hughes, a forward who is projected by many as the likely No. 1 pick in the 2019 NHL Draft.

McDavid, selected No. 1 in the 2015 NHL Draft, was asked if he had any advice for Jack Hughes.

"I get that question all the time," McDavid said. "I don't think it matters. He's so good now. There are so many kids that are coming in now who are ready. There are so many examples he can relate to. There's not a lot of issues he'll face as he gets ready for the draft."

McDavid, 21, has been coming to Power Edge since he was 12. He credits the camp with helping his hand-eye coordination over the years.

"I think it's fun to get a group like this together," he said. "A few guys from the city, other guys coming in.