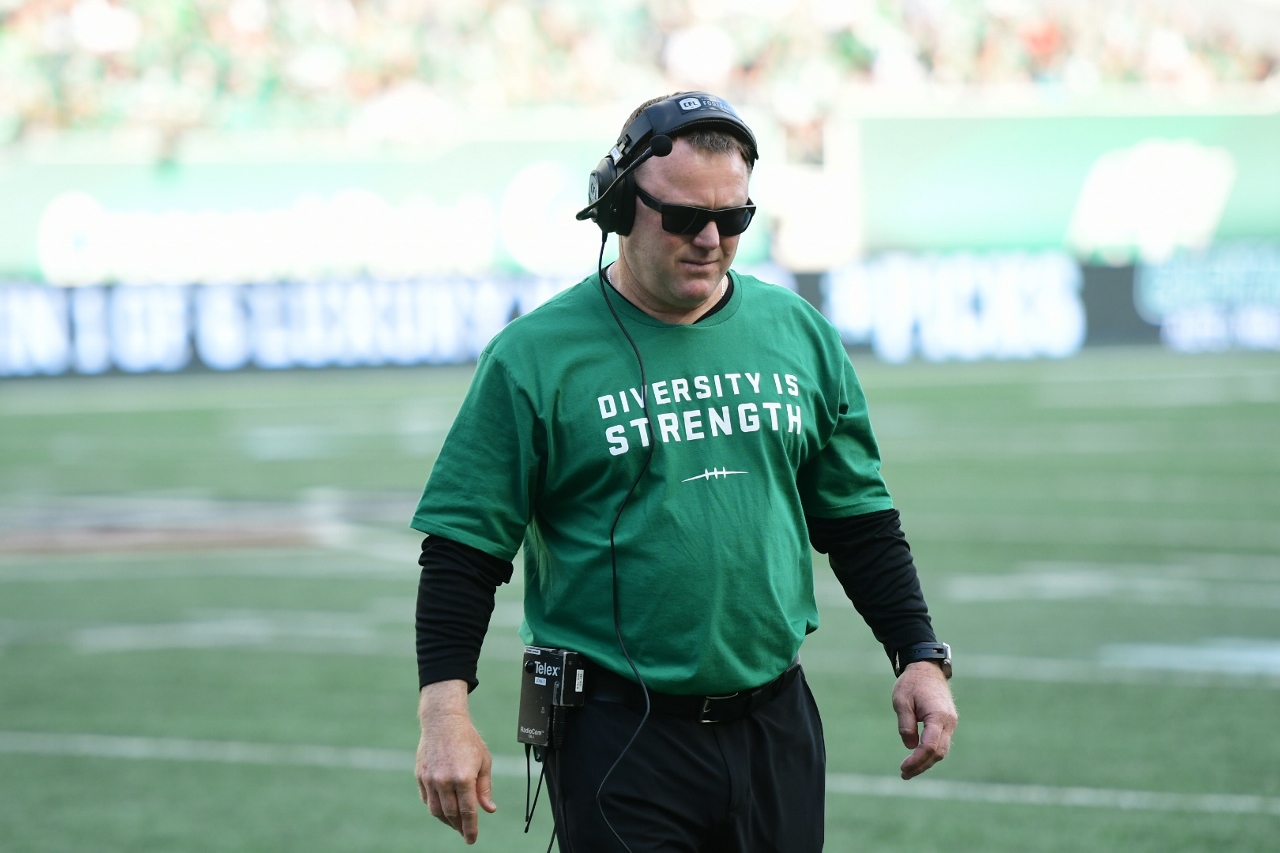 --I just want to make sure I have this right.  Seven days ago, Rider Nation (or at least a majority of them) wanted Chris Jones to hop on a railcar and go back to Tennessee never to be heard from again after telling Duron Carter he was no longer needed and working out Terrell Owens.  Some decried they would never be back until Jones was gone because he is killing the football team.  One week later, the Riders play in front of a sold-out crowd and play their best game of the year by downing the undefeated Stampeders 40-27.  It would seem as if the one most want to hate knew exactly what was going on.

The return of Zach Collaros has meant an end to the offensive struggles that we saw when number 17 was not in the lineup.  You just can't be successful in this league if your starting quarterback is down and with Collaros back, the team has moved the ball. Yes, the team has to start scoring touchdowns instead of relying on Mr. Automatic (Brett Lauther) to kick field goals, but it would seem that hatred towards OC Stephen MacAdoo has been silenced ----at least for this week.

An offensive line that was much maligned at the start of the season has picked up their socks  They kept Collaros clean on Sunday which is a feat in itself.

The defence was the defence with the usual culprits coming through and special teams came up huge.   This is the team you wanted coming out of camp and now that they are relatively healthy, this is a team that like last year around this time seems ready to turn the corner and make a run.

--During the 3rd quarter, I received a text from a friend saying Jordan Williams-Lambert is why Bakari Grant isn't here anymore. I can't disagree. The coaching staff saw what they had in JWL and he had a breakout game catching 9 for 150 plus yards.  While that was good news, it was tough to see Caleb Holley go down with what is unofficially said to be a season-ending knee injury.

After it was over, Chris Jones said don't go anointing them as Grey Cup champions because a week ago some thought they were the worst club in the league.  One win over the CFL's elite franchise is a nice two points, but there is still a lot of work to do.  The good news is the second half of the season should be a lot better than the first half if things continue on this path.


--Holy boohoo Matt Nichols.  As the parody Twitter account @dustinjunk said Saturday, the Bombers have placed him on the six-game injured list due to hurt feelings.  What was that?  Nichols didn't like the fact he was booed after going back into the game after suffering an arm injury in a game they were going to lose. I'm not even sure those boos were directed at you as it seemed like they were aimed at Mike O'Shea.  Good on Matt for expressing his feelings, but one has to think he wouldn't survive two months wearing the green-and-white.  As we know around here, booing and criticizing the quarterback is one of the top jobs for the fanbase.

--Consistency is the number one problem with officiating. It doesn't matter what the sport is.  What one person sees is not what another person sees and it frustrates the fans terribly.  However, when a rule is a rule and it is ignored, questions have to be asked.   Edmonton's Duke Williams received a penalty earlier this year for using a towel as a prop.  Fast forward to the Bombers-Ottawa game and Darvin Adams uses a camera as a prop and gets away with it.  ?????   How is that missed?  The same goes for the Derel Walker throat slash after scoring a TD against the Riders? While maddening, I can understand this call not being made or that call not being made because an official sees it differently, but this is as black and white as can be and it is ignored.  Why? If the league is going to have a Twitter account to explain decisions on the field, then they need to start explaining why calls aren't made as well.  The Williams/towel incident is apparently going to be discussed in a video this week.  Why are we waiting for so long? How about providing the explanation right away?

--It was soooooo good to get out to the Rams practice field this weekend and see the team getting ready for a Wednesday night exhibition game at Leibel Field against Manitoba followed by the season-opener August 31 against Calgary.  I am expecting big things from the "Horns" this season in what will be the last year for Noah Picton.   Canada West will be an extremely competitive conference again with everything having to go right for whatever team hoists the Hardy Cup,  Like all other teams in the conference, the Rams do have some question marks going in, but it should be an exciting season. Steve Bryce and staff are ready.

--I am guessing it was not a good night's sleep for Scott McAulay and the Thunder.  The Saskatoon Hilltops came in and blew the doors off their provincial rival winning 41-7. One week does not make a season.  The Hilltops are good as they traditionally are, but I don't think the next game between the two will be a 34 point blowout win either.

--The Pats start training camp Tuesday.  Let me repeat that, the Pats start training camp Tuesday.  That was a short summer!  Why do I get the feeling this could be a year to remember for the Prince Albert Raiders?  I have to think they are the class of the Eastern Division as it stands right now.  I think it is pretty safe to say that the excitement generated in the second half of the season in Moose Jaw, Swift Current and Regina won't be repeated this year.  A lot of good hockey players have left the division.  Players that called southern Saskatchewan home.

--The last six weeks of the baseball season are going to be great. Solid races in many divisions and both wild-cards.  Sign me up!

--After months of planning, its time for the Wascana to start showing itself off to a world-wide audience.  The LPGA Canadian Womens Open begins today with events leading up to the start of Thursday's tournament. This should be a great week in Regina.  I hope you get out there and enjoy part of it.


Great effort by the Riders. With that "D" playing the way it is, you can never count this team out. Much too early to talk about being in the Grey Cup, but if you stay healthy one never knows.


I guess we are just going to talk about consistency and not bring up the obvious PI on Edem at the end of the game. I'm a Rider fan and I knew that was PI. Dickenson had every right to bitch on that.


Oh Rider Nation, keep being you and don't ever change. Your constant flip-flops are amusing!


Best thing about yesterday's game was seeing ads on TSN for US College Football. First game is August 30. Football I can truly enjoy will soon be back.

If you opened your mind you could enjoy all brands of football as I do. Give it a try.

Solid effort by the Riders. That was fun. The usual heart palpitations at the end when the Stamps got closer but wouldn't be a Rider game without them. On to the next week and game. Sorry to see Holley go down with an injury when he just got back in the lineup. One of those years for him. Interested to see if Bagg or the young Moore from the practice roster replaces him. Looked like Thigpen tweaked something as well possibly opening a spot for Marshall's return. Oh and it was Purifoy not Elam who got a little handsy on the receiver at the end. But them's the breaks. Kudos to the defence and special teams as well as the offensive line for their play. And Coach looked good in green. Hats off to the fans as well for bringing the noise. All in all en enjoyable evening.

The Saskatchewan Roughriders: Giving Montreal their only win and Calgary their only loss. LOL!

It was either you or Rod who brought this up yesterday. If his feelings were hurt, don't ever come to Saskatchewan to play!

Suck it up big boy!

Duron Carter set to rejoin the Roughriders in place of the injured Holly, you read it here first on,
THE BLAIR NECESSITIES

While tooting Chris Jones' horn Scruffy said, "It would seem as if the one most want to hate knew exactly what was going on."

That's a novel way to look at it.

The reality is, all Chris Jones did was correct his own bad judgement. Chris Jones is the guy that signed Duron Carter in 2017 and he still didn't learn his lesson and resigned him for this year.

This constantly instructing us to like Chris Jones is getting awfully old.