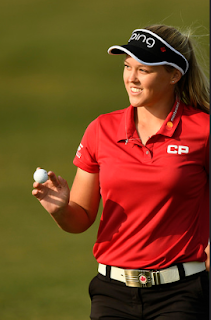 --Amy Yang is the leader after 36 holes of the LPGA CP Canadian Womens Open, but Canada's Brooke Henderson is on her tail.  The 20-year-old shot her second straight 66 to put her at 12 under--one back of Yang.  Henderson is in the final group of the day Saturday.  She tees off at 10:50.  The leaderboard can be found here.

--Duron Carter's next CFL stop will be Toronto. Reports say the free-agent receiver will be signing with the Toronto Argonauts before the weekend was over.  Toronto was beaten 25-22 by Montreal in CFL play on Friday.

--The Stanley Cup stopped off at the site of the Humboldt Broncos bus crash Friday morning.  The iconic trophy then went to Humboldt courtesy of Washington Capitals forward Chandler Stephenson. He was joined by NHL'ers like Brayden Schenn, Brayden McNabb and Mark Jankowski at the Elgar Petersen arena for a day of festivities as Stephenson honoured the 16 who lost their lives in April and the 13 who were injured.

--Vince Carter won't say his 21st N-B-A season will be his last. At least not yet. The former Raptor signed a one-year veteran minimum contract with the rebuilding Atlanta Hawks. It'll be his eighth team. At 42 Carter is the league's oldest active player.