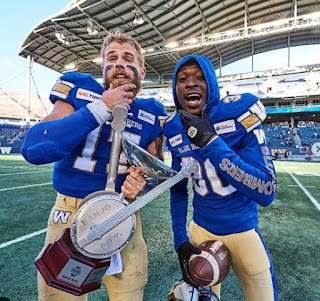 The Riders six-game win streak is over.

The Winnipeg Blue Bombers avenged a last-play loss at the Labour Day Classic by dominating the Riders by a score of 35-10 at the Banjo Bowl on Saturday.

On the first drive of the game, the Bombers found themselves facing a 2nd and 17 at their three yard line. Chris Streveler called his own number and ran a quarterback draw for a first down which was the beginning of the end for the green-and-white.

Streveler went on to lead the team down the field on a penalty-aided drive that took over half of the first quarter ending it with a one-yard run for a touchdown to give the Bombers a lead they would not give up much to the delight of a sold-out crowd at Investors Group Field.

Head Coach Craig Dickenson says that 2nd and 17 play by Streveler certainly set the tone for what was a long afternoon for his football club.

That was a big play,” Dickenson said. “He came out and he got a first down. I’m sure we’ll look at the tape and see what we could have done better. We knew it would be a tough game and I’m not surprised that they came out firing. I’m a little disappointed in how we handled them physically. I thought we would handle them a little better.”

Quarterback Cody Fajardo, who scored the Riders only touchdown on an 8 yard run in the third quarter, did not mince words at the end of the game saying it was an effort deserving of a loss.

“We didn’t show up.” Fajardo said.  “I think we were riding the high of six games a little too much. Some times this is good for a team to go out there, have a game like that and understand that you’re not invincible.

With the win, the Bombers are now 9-3 on the season while the Riders fall to a record of 7-4.  Saskatchewan’s next action will be at Mosaic Stadium Saturday afternoon at 5.
at 9/07/2019


Micah Johnson may be a bigger bust than Derek Dennis! MAKE A TACKLE!

Micah Johnson is proving what Derek Dennis proved.
Never outbid Huffer for a Stampeder.
Hufnagel knows what they're worth.