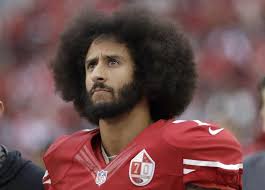 With the Alouettes in general, and Darian Durant in particular, struggling this season, fans are dreaming about the possibility of Colin Kaepernick eventually playing for Montreal.

While the Als placed the controversial quarterback on their negotiation list about a month ago, providing them with his exclusive Canadian Football League rights, nothing’s imminent according to general manager Kavis Reed. And it might be nothing more than wishful thinking at this time.

After Tuesday’s practice, Reed admitted he has reached out to Kaepernick’s agent, basically to inform him of the situation, but has never spoken to the former San Francisco 49er. Kaepernick hasn’t been invited to Montreal, either for a visit or to work out for the team, Reed quickly added.

“He’s in the midst of some very important things,” Reed said. “We understand there’s a movement going on around him. We’re doing our due diligence and making certain they know we want to see where he’s at. It’s a matter of kicking the tires at this stage.

“To me, he’s a very good player. Take all the movement stuff aside. He’s a young man that we feel has a very good football IQ. He has taken a team to a championship level. The talent’s there. As a GM, you have to look at the talent. It’s incumbent on us to explore it.”

The 6-foot-4, 230-pound Kaepernick, a free agent who’s currently unemployed, has gained as much attention for his off-field exploits as for anything he accomplished during six seasons with the 49ers.
He gained nationwide attention last season for his protests during the playing of the U.S. national anthem, motivated by what he viewed as the oppression of black Americans, killed during interactions with police.

He was going to sign with Baltimore this month until his girlfriend, radio host Nessa Diab, posted an unflattering tweet comparing Ravens owner Steve Bisciotti and former linebacker Ray Lewis to the characters from the movie Django Unchained, about a cruel plantation owner and his loyal house slave.

While Kaepernick helped the 49ers to Super Bowl XLVII, he also had a 28-30 record as the team’s starter, including 1-10 last season after replacing Blaine Gabbert. Kaepernick was benched during the 2015 season.

Meanwhile, as the Als begin to prepare for Friday’s game at Calgary, they wouldn’t commit to whether they’ll display any signs of solidarity — as did the Saskatchewan Roughriders on Sunday — prior to the opening kickoff.

Riders players and coaches linked arms during the playing of O Canada prior to their game against the Stampeders in a display of unification. Quarterback Kevin Glenn said it was an opportunity to show family and friends in the U.S. import players were aware of what had transpired earlier that day prior to the start of every NFL game.


The circus is full bloom in Montreal now

End of Darian Durant in the CFL

Cut Durant already, send him back to the Carolina. What a waste of money. He was done a long long time ago but Saskatchewan Roughriders previous loser regime still payed him and enormous amount of money for doing absoloutly nothing.