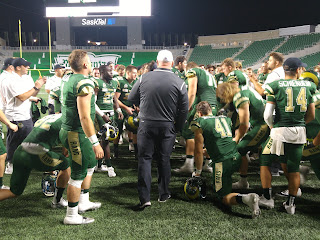 The Regina Rams opened up defence of their Canada West regular season title Friday night with a 36-20 victory over the UBC Thunderbirds.

The Rams defense made life miserable for UBC quarterback Michael O'Connor who could not get on track with Regina intercepting a pair of passes and recording two sacks while getting numerous pressures.

Offensively, Noah Picton started off his season by going 23 of 35 passing for 335 yards and two touchdowns.  Mitch Picton was his favourite receiver as the Riders draft pick hauled in six passes for 120 yards.

It doesn't get any easier for Steve Bryce's crew as they are in Calgary next Friday to take on a Dinos team that beat Alberta 55-26 in Edmonton to open the season.

In Winnipeg, Scott Flory's debut as University of Saskatchewan Huskies head coach was a successful one as the Dogs beat the Bisons 44-23


In the words of Rod Pedersen. the UBC Thunderbirds got "MOLLY-WOPPED"!


Picton needs a CFL opportunity. The poise he has is something else. Yes, getting squashed by a 300 pound DT might not be pleasant, but the kid can play.

Were you there? If so and you don't think that was a clobbering, then you didn't watch very carefully.

Guessing you weren't there though and just felt like being a keyboard tough guy.


It was a good old fashioned schoolyard beating for 3 quarters. I'll call it a clobbering!


To the guy under Rob's comment. Is there a difference between a mollywopping and a clobbering. Just askin!