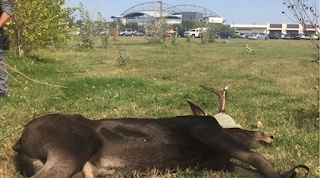 A moose that was on the loose for two days in Winnipeg and almost delayed the start of a Canadian Football League game has died after being tranquilized.

Manitoba's Sustainable Development department says two days of running around the Manitoba capital was too much for the moose, which was first seen Friday morning behind a school in the city's Fort Garry neighbourhood.

The next day, it turned up in a grassy area outside Investors Group Field just as the Winnipeg Blue Bombers were preparing to take on the Saskatchewan Rough Riders.

Police blocked off routes to the stadium to keep fans from getting in the way as conservation staff attempted to corner the animal, and the Blue Bombers considered delaying the start of the game.
Conservation officers managed to tranquilize the moose, which was between two and three years old, and were planning to remove it to a remote location.

However, it did not survive.

"The stress and exertion of running through a populated urban area in hot weather for two days took a toll on the moose and unfortunately it did not survive transport," the Sustainable Development department said Monday in a statement.

"Public safety is paramount and the officers made every effort (Saturday) to ensure no one got hurt."
Joe Johannesson, the conservation officer supervisor for the Winnipeg district, said the moose evaded capture Friday evening by jumping into the Red River and swimming to the other side.

Johannesson said it's rare for moose to come into the city, but there are natural corridors along river banks that make it possible.

Hope they give the meat to a food bank then


Two days of running around Winnipeg might make me want to kill myself too.

Too bad that moose [rip] disrupted the fans entrance into Canada's best stadium as that Blue Bombers fan base would have blown those twin rooftops off the venue with their high cheering decibel levels, the highest recorded in the nation ever! Winnipeg Investors Group Stadium_ world class! The rest don't compare.