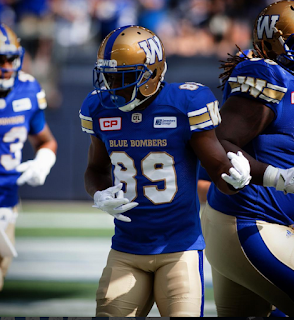 Thoughts from the weekend!

1. Is anyone pushing the panic button? By listening to the Sportscage Rider Radio Roundtable, it appeared as if people were or people that didn't want to phone for the last three weeks after convincing wins decided to dial up to say I told you so.

Did Chris Jones make a mistake in not challenging "accidental pass interference" late in the first half? Yes! Did Andre Proulx's crew make some questionable decisions. Absolutely! Did the Winnipeg Blue Bombers deserve to beat the Riders by 20. Yes!! There is no debating that.

The Bombers were the better team on Saturday. You can debate if they were 20 points better or not, but they got the win,  and they deserved the win as they had a fire coming out of the gate that the Riders couldn't match. That team was ready to go from the time they hit the field for pre-game. In a way, they did to the Riders what the Riders did to them on Labour Day.

Here are some thoughts


Bottom line on this one was it was a game Winnipeg wanted more and by no means are things back at square one. The Glenn injury is concerning, and Hamilton is getting better, but there is no need to push the panic button at this time as some are seemingly doing.

2. Just a horrible week for CFL quarterbacks especially Travis Lulay. Is his career over after a season-ending torn ACL? You don't want to think that, but it has to be considered and if so, what a terrible way for it to end for a guy as classy as Lulay.

3. Two words for Jason Maas. GROW UP! Wasn't that a nice little temper tantrum on the sidelines Saturday night. He then went off after the game on a number of topics.  The guy has already shown his colours with his stance towards being miked up last year and now this. Just embarassing! I can only imagine how the CFL twitteverse would have erupted had Chris Jones pulled off the same stunt Maas did. This just in, I'd rather deal with Chris Jones than Jason Maas any day of the week.

4. Congrats to the Regina Thunder. They went up to Saskatoon and found a way to beat the Hilltops, Chances are these two teams haven't seen the last of one another this year.

5. The Calgary Dinos reminded the Rams and perhaps Canada West who the top team in the conference is.  Calgary took it to the Rams on Friday night winning by 20. Regina tried to stay with them, but the Dinos were just too good especially on the offensive line. Again, while a 20 point loss is a little disconcerting, I don't think there's any real worry at the University.  Meanwhile, the Scott Flory era is starting off well at the U of S as they are 2-0 after a win over Alberta.  The Rams and Huskies meet in Saskatoon September 29 in what should be a ring-a-ding-dong dandy.

6.  How about those Cleveland Browns!  The worst team in all of professional sport started their 2017 season by going three and out and then allowing the first punt of the year to be blocked with Pittsburgh falling on it for a touchdown.  How can Browns fans have any modicum of optimism? How?  One other NFL note and that is former Rams DL Akiem Hicks struck it rich on the weekend signing a 4 year, 48 million dollar deal with the Bears.  Well done big man!  With Hicks and Freeman on the Bears, are they Regina's unofficial NFL team?


7. Thanks, but no thanks to DAZN. Da Zone as it is being called and is being called Da Zaster by many after a less than inspiring first weekend. I was on the fence on getting the new streaming service replacing Sunday Ticket.  After hearing the less than positive reviews come flowing in, I will be content to watch whatever comes across my TV screen.  Someone didn't do their homework.

8.Canada's sports networks are showing how much they miss hockey by devoting so much time to highlights from rookie tournaments. Do we really need this when coverage could be going elsewhere like to the CFL. Apparently, the answer is yes!


9.  Montreal has shown how much it wants baseball by having great crowds at Olympic Stadium for Blue Jays exhibition games. MLB has said it's noticed. It would appear as if Commissioner Rob Manfred is just paying them lip service. Montreal has offered twice to host games where the venue has had to change because of Hurricane Harvey or Irma and baseball said no.  They would rather see the Astros and Rangers play in front of no one than see the two teams play in Montreal where people there could have shown MLB how much they want the Expos 2.0 by going to games not involving the Blue Jays.  It makes MLB look bad. Real bad.

10.  I didn't know the guy when we both wandered the hallways of Campbell Collegiate in the 80's. I can't remember the first time I was introduced to Rob Vanstone, but I am glad I was because he has turned out to be one of my best friends not only in the business we are in, but as a whole.  I do what I can to get under the skin of the "rumpled scribe" and he does the same like mailing me sports cards of such luminaries like Steve Smith and Dan McGwire. Of course, I return the favour by reminding him of the Seahawks demolition of the Broncos in Super Bowl 49, the fact his Winnipeg Jets sucked then and suck now while sharing yuks a plenty at High Impact Wrestling shows. He really does bring out the worst in me and vice-versa.

Rob hit the 30 year mark at the Leader-Post this week. He's so big he even got a mention of that from Jay Onrait and Dan O'Toole on Friday. He is one of the best,  if not the best sportswriter in this country. I don't agree with everything he says, and we have had some spirited debates. Events with Rob around are simply better and I simply couldn't imagine the Regina sports scene over the last many years if he wasn't a part of it.  Congrats Rob!! You still suck and you know I mean that with the highest regard.

Me too Mitch! I paid almost $200 a year for over a decade for Sunday Ticket and won't be getting this new streaming DAZN after yesterday's problems.

"7. Thanks, but no thanks to DAZN. Da Zone as it is being called and is being called Da Zaster by many after a less than inspiring first weekend. I was on the fence on getting the new streaming service replacing Sunday Ticket. After hearing the less than positive reviews come flowing in, I will be content to watch whatever comes across my TV screen. Someone didn't do their homework."


1. Don't you just love Rider fans! Most fickle fans in the game

2. Cancelling my subscription with DAZN today. I'll just go to BP's if the game I want to watch isn't on. Just a joke!


The short kick was the turning point. Great call if you get it, dumb one if you don't.


Vanstone used to be in charge of the best sports department in Western Canada. The LP sports section is now a joke even with some of his columns. Sad to see the industry dying the way it is. It'll be amazing if he hits 35 years.


I would put up with bad reffing any day of the week (like Saturday and Sunday in Green Bay) then excessive challenges. The flow of the game continues even though there are bad calls.