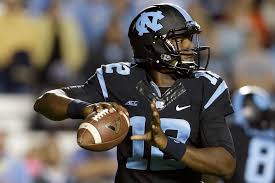 The most confounding issue for scouts examining Mitch Trubisky before the draft was explaining how he was an elite NFL prospect when the man who kept him on the bench for three seasons at North Carolina couldn't crack a practice squad.

If Trubisky was destined for greatness, why didn't he emerge for the Tar Heels before the 2016 season?

The answers found in Chapel Hill, where scouts say some of the team's receivers pointed to Trubisky being the best quarterback on the roster well before last fall, ultimately came back to the fact North Carolina was winning a lot with Marquise Williams as the starter. Also, Williams hails from Charlotte, an area the Tar Heels must dominate on the recruiting trail to be successful. Trubisky, from Ohio, had two years of eligibility remaining when Williams won the job in the summer of 2015.

Ultimately the Bears fell head over heels for Trubisky and didn't have an issue that his UNC resume included only 13 starts, trading up one spot to draft him with the No. 2 pick in April.


Today the quarterbacks remain a league apart. Trubisky takes a step closer to becoming the Bears' starting quarterback Sunday when he is expected to play with the first team beginning in the third quarter. Meanwhile, Williams sits fourth on the depth chart for the Saskatchewan Roughriders midway through the CFL season.

After a solid preseason, Williams was third on the Roughriders' depth chart before the team traded for Vernon Adams, the former Oregon quarterback, on Aug. 15. Now Williams is clinging to a roster spot for a last-place team.

Williams, who was 11-3 as a starter in 2015 and set more than 20 UNC records, doesn't buy the biggest criticism of Trubisky — that he started only 13 college games.

"There have been guys who have played less than Mitch and have been successful," Williams said. "You look at him now and you can't think he only played 13 games last year. The guy is having fun and he's living that dream."

He sounds as if he's living that dream vicariously through Trubisky. Williams was undrafted last year and signed with the Vikings but was quickly released after rookie minicamp. He had a three-month stint with the Packers last summer, completing 6 of 17 passes with an interception in exhibition action before being waived. His football career appeared over until the Roughriders called in May.


Did he think he had a chance to stick in Green Bay?

"I could have," said Williams, who still exchanges texts with Aaron Rodgers. "I didn't put the time in to be there, honestly. That is one thing I regret, just not putting in that extra time when I should have.

"If I get the opportunity again, I know what I need to do. I go home and I study the game more and more because opportunities are cut short."

Williams is adjusting to a wider field with 12 players and receivers allowed to make a running start toward the line of scrimmage.

"It's a lot different," he said. "I'm trying to learn it, learn the system and the new defenses. Once you've been around a couple of years it becomes easy and natural. Sometimes I still make the rookie mistake. That just comes from getting quality reps."

Williams, who tweeted highlights of his former teammate from his Bears exhibition debut against the Broncos, figured Trubisky would be pushing for playing time quickly at UNC after having been named Mr. Ohio, the most outstanding high school player in the state, in 2012.

"As a freshman he came in with the mindset of just trying to win the job," Williams said. "A lot of guys ... come in in awe. This guy came in ready to go and ready to learn. I knew he was going to be this good. ... I told everyone he was going to be successful and he was going to be one of the greatest quarterbacks to come out of his draft class. He proved that.

"When I was playing, he could have played. I was excited for his success. A guy like me, everyone thought I should hate on this guy. No, I was excited he got drafted so early. It was a life-changing moment for him and his family. He's getting to live that dream and that's an awesome feeling. That's one of my boys."

He's looking forward to Trubisky's season and hopes he's not "thrown in the fire too soon." Meanwhile, Williams is chasing his own dream.

"Just to get back to the NFL," he said. "That is the ultimate goal. The main thing is having fun here first ... adapting and then getting ready for the (next) chapter. If not, just make a living here."


Finally, a journalist on a Saskatchewan blog that doesn't have to brown-nose to Chris Jones.
This guy told it like it is, he called us a "last place team."