--September has arrived and that means football, football and more football.  Isn't it great! 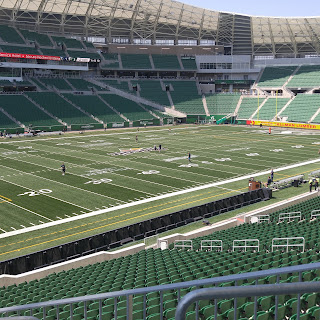 Make no doubt about it, this is the place to be this weekend starting tonite.

There is a lot of excitement about the University of Regina Rams going into this Canada West football season and there should be.

Under Steve Bryce, the Rams went 6-2 last season to finish first in the conference before losing to UBC. Coincidentally, it is those same Thunderbirds that will oppose them at Mosaic tonight in what should be a duel of the conference's top two quarterbacks.

If you don't know what Noah Picton did last year, then you're not really a football fan.  In his 3rd year, the Rams quarterback put up prodigious numbers that were recognized at season's end with him being named the Most Outstanding Player in Canada.  Can he do what he did last year again?  If he does, the Rams season could very well end with them playing at the Vanier Cup.  Picton has a plethora of receivers to throw to including cousin Mitch who is one of the best in the country with Atlee Simon running the football.  I think Simon has a chance to have a huge year and establish himself as a high draft pick in the 2018 draft.  His efforts are overshadowed somewhat by what Picton does, but he can be just as lethal.

Add this to a defense that should be very stingy, and it sets up what should be another good season and one where Regina will catch no one by surprise. I don't know if that is part of the reason as to why the Rams came in 3rd in the pre-season coaches poll, but it wouldn't be surprise me at all if what you see tonight is what you see when it comes time for the Hardy Cup final  At the end of the day, Canada West will be the most competitive conference in Canada again and whoever gets out will have accomplished something.

On the other sideline, Blake Nill has no slouch at quarterback either as Michael O'Connor has been everything that was advertised when the Ottawa native returned to Canada after some time at Penn State.

Can't wait for kick-off at 7.  Hope to see you at Mosaic! If you have Access as many of you do, the Rams games have gone to SaskTel Max after years on Access so you'll have to go to the game or pay up on Canada West TV.  I don't make these decisions so don't ask me.

-- The Rams game leads into what should be a wild and highly entertaining atmosphere on Sunday as the first Labour Day Classic at the stadium takes place. I wonder if our good friends from Winnipeg that weren't here for opening night will be able to find the place.   To a man, the Riders will tell you they let the Bombers get one on July 1 when they scored a "W" in overtime.

The green-and-white have shown us something after the last couple of weeks and a win on Sunday will only keep this wave rolling while making the West that much tighter.  Can the Riders win this one and the Banjo Bowl? That's a pretty tough task no matter the record.  You can't win both if you don't win the first one though right?

Labour Days at old Mosaic were special. What will the first one at new Mosaic be like? It should be an afternoon to remember.   The Bombers think they have something special going on while the Riders are thinking they have turned the corner.  Something has to give.  It has all the makings of a ring-a-ding-dong dandy!

--I can't believe the Hamilton Tiger-Cats were stupid enough to hire Art Briles.  Once again, it would seem as if Commissioner Randy Ambrosie saved the day although it seems as if he was aware of what was going on and only stepped in once the negativity started.

Sorry, but this move was wrong right from the start.  I am guessing new coach June Jones is the one who recommended this hiring.  It appears as if Jones and Briles are friends and Jones wanted to help a buddy out. That's fine, but for Scott Mitchell to say yeah why not,  and then defend the hiring once the firestorm started is something that made me shake my head.  In fact, several statements from the TiCats CEO made me shake my head.  The fact he hasn't resigned or told his services are no longer needed make my shake my head.

When I saw the announcement first pop up, I went WHAAAAATTT?  This is the same guy who turned a blind eye to numerous sexual assaults at Baylor right? How can you bring this guy into the CFL? How can you do this on a day when your team is hosting a womens football clinic?  Was the next move to bring in OJ Simpson as the running backs coach?  There was no logical explanation for this. None! For Mitchell to sit there and defend it and then say he was amazed at the "tsunami of negativity" that followed is simply astounding.  What did you think was going to happen Scott?  I really don't understand how Mitchell is still earning a paycheque after all of this, but he is.  Is that right? It is in someone's world, but its not in mine.

As for Ambrosie, a Winnipeg report says he knew all about it and only jumped in when the backlash started.  What else could he do? A commissioner should not have to rubber-stamp all hirings. For that matter, he shouldn't even be involved in who the nine teams have working for them.  That is something he should have faith in the teams to do.  Faith that they will bring in guys who are good for the league and not guys like Briles.  In having Art Briles be a member of the Ti-Cats staff for even a couple of hours, a great deal of damage was done.  Corporate sponsors were outraged, fans were outraged etc. etc.  In the end, Art Briles got a football job before Colin Kaepernick.  Imagine that!

--I said at the start of the year the Ottawa REDBLACKS were the best team in the East. It sure didn't look like that to start the season off as they suffered one tough loss after another. They are just a tough out now as they have their game back.  What Western team will they play in the East final this year?

--If the struggles in Montreal continue, will Darian Durant be the starter when they visit Regina. Right now, I don't know.  The Montreal version of Durant is certainly not what Rider fans were treated to over the course of his time in green-and-white

--There are a lot of d-bags in the world of professional sports.  Two who are not are Houston defensive lineman JJ Watt and Chicago Cubs first baseman Anthony Rizzo.  Watt is using the power of his status as one of the NFL's most popular players to raise millions of dollars for the people of Houston and Texas that have seen their lives altered forever by Hurricane Harvey.  He asks for this much and he gets it. He asks for more and he gets it.  He has players throughout the NFL coming together for the cause.  As for Rizzo, he is a cancer survivor.  He has never forgotten that and he donated 3.5 million this week to a Chicago childrens hospital.

At the ceremony, Rizzo stated after choking back tears“To be able to give back and do this type of work is so much bigger than winning a World Series".

The three-time All-Star also revealed he tries to find time nearly each month in his busy schedule to visit patients at the hospital. . Rizzo rarely tells the media about his appearances because he doesn’t want to be distracted when he visits the children in their individual rooms.

If sports had more guys like Watt, Rizzo and Seahawks quarterback Russell Wilson who frequently visits young cancer patients at a Seattle hospital, sports would be a much better place.  There are many more like those three, but sometimes their efforts don't get publicized for whatever reason.

--It has been great to see leagues and teams step forth in the wake of Hurricane Harvey to donate tremendous sums of money.  Has the CFL done anything or announced anything though? If they have I've missed it so sorry.  There are players, and alumni on every team who are affected. I saw a story on CNN this week about people in Bo Levi Mitchell's hometown and Rider d-lineman Willie Jefferson has family in that area.  I know the Riders through big Willie  are doing something Sunday and are encouraging fans to donate both at the game and on Saturday's Fan Day.  I know I will be finding a donation box before heading up to the press box on Sunday.  I encourage you to do the same before you take your seats.  One less beer for you will help people out who need that $10 bucks more than you need that beverage.  It's not a hard sacrifice to make is it?

--The kids are headed back to school! Is that it, is summer over?  I guess we'll know for sure when we walk into wherever and see the Christmas supplies on the shelf. SIGHHHH!!!

--Have a great weekend. If on the road, stay safe. GO RIDERS! GO RAMS!


Well said on Briles Scruff. What do you think the last couple of months would have been like had Orridge still been on the job. Do you think he even knew who Briles was?


Can't wait to see Noah start slinging the football around again this year. Rams won't fool anyone this year. They have to earn everything they get.


What an embarrassing week for the Ti-Cats! Bob Young should have told Mr. Mitchell to clean out his desk. What a disaster they have become, and now they want Manziel. I bet Collaros is just waiting for a phone call saying a trade has happened.


How Scott Mitchell can look himself in the mirror after this week amazes me. He should be let go.