--Who is off to Innipeg? The Rider Nation will do this weekend what Bomber fans did last and that is travel in support of their team. I just ask for you not to be as stupid as some of those in attendance at Mosaic last weekend.  In fact, if you are going and you have plans to be a complete and total idiot looking for trouble, just stay home and save the organization from being no better than the jackwagons who sat in Pil Country last weekend who thought it was cool to spit on Duron Carter while assaulting Gainer.  PS: Those fans missed the memo. Do all you want to Worksafe Bob, but leave the gopher alone. They couldn't even get that right!!

--Doug Brown, what an embarassment you've become! I believe "weepy blog article" was the way Jungle Jim Lang referred to it and that might be the most positive assessment coming from these parts. I always knew Scott Schultz was 10 times the defensive lineman he was, and he is 10 times the writer as well and I've never read anything penned by the "old 96er".  If you really believe what you wrote down, you should seek medical advice immediately because you might have CTE.  It is real sad when teams that you were on did the same thing you accuse the Riders of AND your team president was one who would often jump offsides on 3rd down plays to keep the clock ticking. Guess you forgot about that didn't you Doug.

The most despicable thing on the field that involved the Bombers in the LDC were the Bombers themselves and that's fact.  If they don't play any better in the Banjo Bowl, be prepared for another loss.  You are better than that and so is the team you cover.  By the way, your former team-mates Matt Dunigan and Milt Stegall think you are out to lunch too. They have no problem with anything that went down. Deal with it Doug!

--It sets up what should be a wild affair tomorrow afternoon at Investors Group Field. Do the Riders stay on a roll or does Winnipeg bounce back from a less than stellar outing in the Labour Day Classic. If the /=S=/ get the "W", and they get it in convincing fashion as they did last Sunday, you will be able to say that perhaps this team could be putting themselves in a position to host a playoff game. You couldn't say that a while ago.  How things can change!

--Before the Riders play their big game tomorrow, the Regina Rams have a big game tonight. They are in Calgary to play the Dinos in what will be Steve Bryce's first time patrolling the sidelines at McMahon Stadium. The Dinos are as tough at home as the Stampeders are. Calgary has been the class of Canada West for a long time and they show absolutely no sign of letting go of the hold they have on the conference.  The Rams knocked them off last year to get their season going, and I can see it happening again.  Sheldon Gray's D neutralized a good UBC team last week and I could see a repeat of that tonight.  If Noah Picton is Noah Picton, I see the Rams pulling off the upset and could you really label it that if they do? I'll have the call for you on 620 CKRM at 530 alongside Addison Richards who makes his debut behind the microphone. I know he is jacked up for it, and so am I.  I hope Mr. Richards knows what he is in for. Somehow I think he does!

--Let's not forget about the Thunder. The Hilltops schooled them in Week 1 and reminded them that they were in no mood to hear about having their reign atop the PJFC end from the team just a couple of hours south. The rematch goes Saturday in Saskatoon. We will see how Scott McAulay's team rebounds.

--Evraz Place is showing again this week why it has to be one of the best sports facilities in Canada.  The Riders are getting ready for the Bombers at Mosaic, the Pats are getting ready for the upcoming WHL season at the Brandt Centre and the Grand Slam of Curling is happening at the Co-Operators Centre. There has been a solid turnout at the CoC for the first event of the year on the curling schedule as rinks like Jennifer Jones (pictured), Rachel Homan, Brad Gushue and Kevin Koe take part. 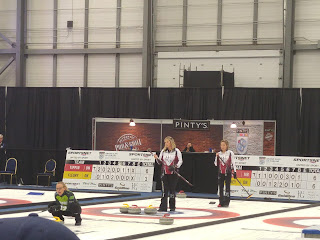 Regina's Braeden Moskowy is also here playing with the Winnipeg rink skipped by Reid Carruthers. I was somewhat surprised when he said this is the first time he has curled competitively in Regina since he was in the junior ranks.  It would be hard not to pull for him if his rink made it to the Brier. Of course, it would be better if he were skipping a Saskatchewan team at said event, but he's quite comfy where he is and as he said to me on Wednesday, I'd love to be here for the Brier unless I'm representing Canada at the Olympics. That would be OK too.

--Are we really less than 30 days from the start of the NHL season.

By the way my Super Bowl prediction is Seattle over Pittsburgh.

-Didn't see Kansas City winning outright in New England, but I did have them to cover. I certainly didn't start Alex Smith in one of my fantasy leagues though. SIGHHHH!!! Don't think  many people saw the Chiefs going into New England and destroying the Patriots.

--What are your expectations for the Pats? They certainly were the center of attention in the Queen City last year and for good reason after putting up 52 wins and getting to Game 6 of the WHL final before losing. This team isn't close to what that team was.  The rink will be full every night as fans watch this team go from night one to the Memorial Cup. What is the over under on wins? Is 40 too high?  I don't see this team making a lot of noise until after the WHL trade deadline.

--I can't wait for the baseball playoffs. There are a lot of very good teams that are going to battle it out to get to the World Series. It won't surprise me one bit if the same matchup we saw last year is what we see this year. What has happened to the Dodgers?

--Welcome back Jay and Dan! They still crack me up.  Their line this week previewing the Colts at Rams game where they said its Scott Tolzien against Jared Goff in the battle of QB's on no one's fantasy team was just pure gold.

That's all I got. Have a great weekend! Behave if you are going to Innipeg.  GO RIDERS!  GO SEAHAWKS!

Low blow on CTE. That's nothing to make to make fun of and you should be embarassed, Mitch.


Cheap shot? What cheap shot? The guy should be known as Doug Clown. He may not have everything there.

Scruffy is riling them up. LOVE IT!!


I can not wait for kickoff on Saturday. It is going to be incredible. If any Bomber fans get in my face, they will go down.


Doug Brown having CTE is a cheap shot, but it would explain his thought-process for his thoughts and that article!


Scruffy and Roddie should really be WWE promoters. They are so good at what they do. They both know it too right gents!