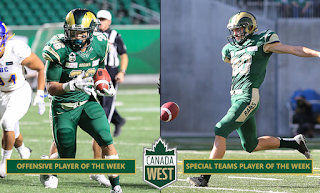 
University of Regina Rams running back Atlee Simon and kicker Daniel Scraper were both honoured as Canada West Players of the Week on Monday for their roles in the team's thrilling 58-55 double-overtime road win over Alberta.
Simon was named the Canada West Offensive Player of the Week after not only collecting a career-high 265 all-purpose yards, but also scoring three majors to pass Jason Clermont as the school's all-time touchdown king. He collected 206 of those yards on the ground as he finished just two yards short of also setting a career high in rushing yards, while also catching five passes for 59 receiving yards including a pair of touchdowns. Simon, who had a 53-yard touchdown run in the second quarter which goes down as the longest run of his career, is now second in the conference in rushing yards.
"After struggling with a high-ankle sprain for most of last year, Atlee has become the player that I knew he could be for this team," Rams head coach Steve Bryce said. "He's a formidable player in this league, and I think Atlee would be the first to tell you that much of his success over the past few weeks is due to the tremendous play of the offensive line."
Scraper earned Canada West Special Teams Player of the Week honours after going a perfect 3-for-3 on field goals during the win, including a 26-yard effort in the second overtime session which finally put an end to the longest game in U of R history. He also connected on 19-yard and 34-yard field goals, both of which came in the fourth quarter.
"Daniel's been improving week in and week out and has become much more consistent in recent weeks," Bryce said. "He's an outstanding competitor and is extremely hard on himself after a miss, so I'm very happy to see him have a game like that for us."
The Rams clinched a playoff berth with the win over Alberta and will take a two-game winning streak into their next game, set for this Saturday afternoon (2:00) at home against a Calgary team that's a perfect 6-0 through the first six weeks of the Canada West schedule.


Good to see Atlee get his game back. He was hot garbage to start the year!