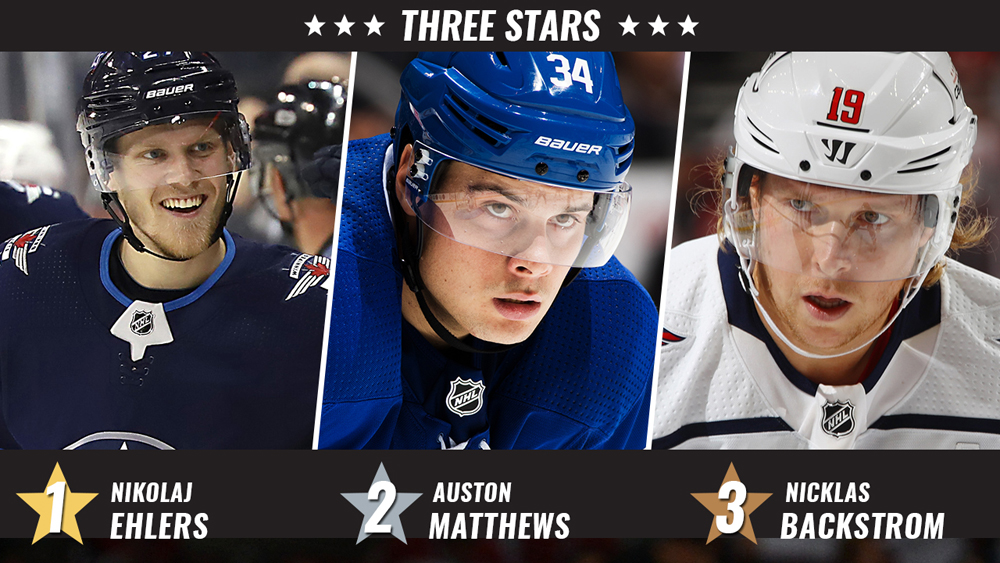 FIRST STAR – NIKOLAJ EHLERS, LW, WINNIPEG JETS
Ehlers led the NHL with five goals (5-2—7), including a pair of winners, to propel the Jets (3-2-0, 6 points) to three straight victories. He recorded 3-1—4, including a natural hat trick and the decisive goal, in a 5-2 win over the Edmonton Oilers Oct. 9. In doing so, Ehlers became the third player in Jets/Thrashers history to post a natural hat trick, joining Ilya Kovalchuk (Nov. 11, 2005 vs. TBL) and Marian Hossa (Jan. 15, 2008 at DET). Ehlers added one goal in a 4-2 triumph against the Vancouver Canucks Oct. 12 and collected 1-1—2, including the winning tally, in a 2-1 victory over the Carolina Hurricanes Oct. 14. The 21-year-old Aalborg, Denmark, native has totaled 45-64—109 in 159 career NHL games, including a team-high 5-2—7 in five outings this season.

SECOND STAR – AUSTON MATTHEWS, C, TORONTO MAPLE LEAFS
Matthews recorded four goals (4-0—4), including two in overtime, to power the Maple Leafs (4-1-0, 8 points) to a pair of wins in three starts. He collected his second career overtime goal in a 4-3 victory against the Chicago Blackhawks Oct. 9. Matthews also scored in a 6-3 loss to the New Jersey Devils Oct. 11 before capping the week with two goals, including the overtime winner, in a 4-3 triumph over the Montreal Canadiens Oct. 14. The 20-year-old Scottsdale, Ariz., native and reigning Calder Memorial Trophy winner has registered 45-32—77 in 87 career NHL games, including a club-high 5-3—8 in five contests this season. His 45 career goals are tied for second in the League since the start of the 2016-17 campaign, behind only Pittsburgh’s Sidney Crosby (47).