Durant To Start For Alouettes Friday 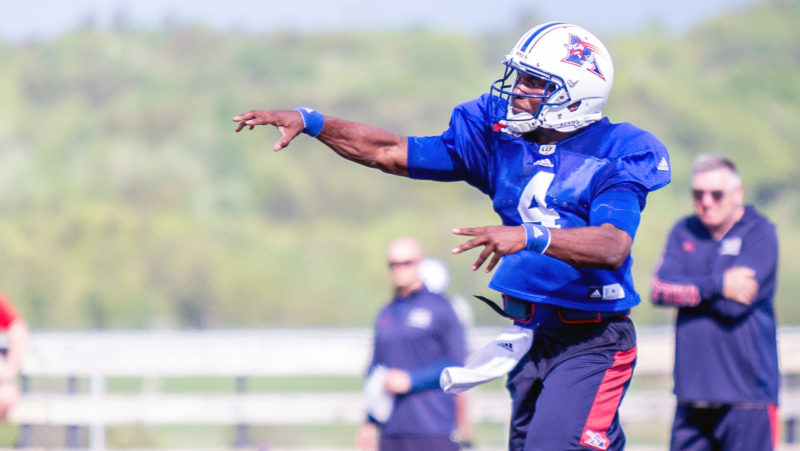 Given his choice between two, and potentially, three quarterbacks, Kavis Reed predictably went with his heart. In this season of disarray, the Alouettes’ general manager remains compassionate to a fault.
With the Als building toward the future, one painstaking game at a time, Reed could have started rookie Matthew Shiltz at quarterback Friday night, when Montreal meets the Saskatchewan Roughriders at Mosaic Stadium. Instead, Darian Durant, in his return to Regina, will try to end a nine-game losing streak.

“He’s coming back to Saskatchewan. He’s legendary there. When you look at where we are in the standings and what the end of our season looks like, why not give (Durant) an opportunity for the things he’s done … for this league,” Reed, the Als interim head coach, said after practice Tuesday.
“A lot of thought went into it. I think it’s healthy for him to start,” Reed added. “What is good and what is right is to start Darian in Saskatchewan.”

Durant spend the first 11 seasons of his Canadian Football League career in Saskatchewan before being traded to the Als last January, providing Montreal with its first legitimate threat at the position since the retirement of Anthony Calvillo. Things, of course, haven’t worked out for Durant or the Als, the future of the 35-year-old — at least with Montreal — clouded in uncertainty.

Durant has passed for 3,107 yards and 15 touchdowns, but also has been intercepted 15 times. He failed to complete a game, yet again, last Sunday, replaced by Shiltz to begin the second half against Hamilton.

But it would have shown a lack of decency on Reed’s part to leave Durant on the bench this week. Truth be told, if he and the offence continue to struggle Friday night, Durant will wind up there, eventually.

Reed also said it would have put Shiltz in a potentially tenuous position at this point of his career having to start in a hostile environment. If he proves to be the Als’ quarterback of the future — no certainty — he’ll eventually experience enough of those scenarios.

Durant, of course, said it’s just another game, especially since he has never played at new Mosaic Stadium. Emotions aside, he’s simply trying to direct this team to a much-required victory for morale.
“It’s not about proving points anymore. What’s done is done,” Durant said. “I don’t try to read in between the lines. I’ve been around this business too long. I’ve seen guys being told one thing and it’s been something completely different. I’ve seen guys have a feeling this is going to happen and the total opposite happens.

“Who knows what next year holds? My job’s to help this team win and show I still have a lot of football left in me. I’ve had a losing season before. I’ve had people tell me I’m done before — and I’ve come back to win Grey Cups.”

Meanwhile, veteran slotback Nik Lewis, who last Sunday told the Montreal Gazette he didn’t expect to play again in 2017, now is scheduled to start against the Riders. And he’s mentally preparing for it to be the final game of his career — unless, of course, it isn’t.

“I’ll get an opportunity to walk off the field the way I want to. I’m pretty sure this will be my last game,” the 35-year-old said. “I’ll make the decision in the off-season. It all comes down to who comes in next (as head coach). If they want me around as a player, I’ll be ready to go. I feel like I have a lot left. But I’m also ready to transition (into retirement).

So Kavis does have a conscience. He cost Darian a Grey Cup victory and here's the payback.