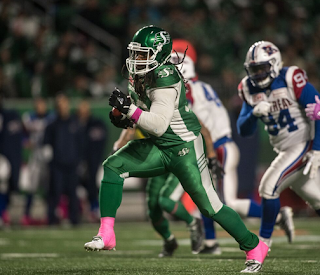 There was some good Friday night at Mosaic, and there was some bad. At the end of the day, the Riders have another victory under their belt, and are one win away from being in the Western Conference playoffs with an 11 win season. Who called that at the start of the season? I was calling for 9 so this team has exceeded what I thought they would do.

Bottom line is that 3rd place in the West is up for grabs next Saturday at Mosaic when the Eskimos visit. Neither team wants to go in the playoffs on a losing note. The playoffs start now.

The playoffs also start for the University of Regina Rams next weekend.  They will go in on a losing note after getting thumped 44-15 in Vancouver.  It means another date at TBird Stadium next Saturday afternoon which is not what the Rams wanted.  The 2nd quarter is not what they wanted either.

They went into the 2nd quarter up 5-0 and went into the locker-room at the half down 35-5.  Give all credit to UBC as they were the better team and they took it to the Rams especially after scoring twice in 30 seconds after a fumbled kickoff.  However, it seemed as if the 13th man was against the Rams and by the 13th man, I mean the officiating in Vancouver.  How a completed pass which was evident to everyone including supporters of UBC could be called incomplete was incomprehensible.  There were other calls as well that were very questionable. As I said on the broadcast, it appeared as if Stampede Wrestling's Cedric Hathaway was the official.

As mentioned, several at UBC also thought there was a definite odour surrounding the performance of the stripes.  At least neutral refs will be used next weekend which should please Blake Nill and Steve Bryce. The T-Birds will have the momentum as they should after winning by 29, but somehow I think next weekend will be different.  The same could be said with the other semi between Calgary and Alberta.  If the Golden Bears beat the Dinos by 50 in Calgary again next weekend, they can just hand the Vanier Cup to the U of A.  After all, Calgary was 7-0 coming in.  Then again, good Calgary football teams seem to struggle in late October and November right?

Speaking of which, the Stampeders have suddenly turned very ordinary. I didn't see any of the game Saturday night, and many were predicting the Eskimos to win.  Many are feeling as if the Stamps are once again guilty of taking their foot off the pedal now that they have first place in the bag. I can't disagree.

The Bombers are limping to the finish line.  Are they ever!  However, injuries are playing a major part there as was evidenced Saturday against BC.  Yes, injuries are hitting everyone at this time of year, but if you don't have the likes of Nichols, Harris, Adams, Leggatt, Westerman etc etc, you are in trouble. Still want to go through the East?

It was a rather sombre Friday for many before the Rider game as the old girl came down. Around 5000 people flocked back to Taylor Field for one last visit.  It was like being there before a game. There were a lot of people where I stood at the corner of 10th and Retallack to see it come down.  For a while I didn't think it was going to. The delay of over an hour was very maddening for some who couldn't stick around for an extra 80 minutes. Perhaps the city should have told us 2 o'clock instead of 1 if they knew some final checks had to be made. Whatever! As I said on Twitter,  I was thinking Capital Pointe would be put up before the grandstand came down.

When it did come down, it was surreal.  Some of those who didn't think they would feel emotion did and vice-versa.  Now the mess has to get cleaned up because the site of the now toppled over structure is saddening. It is a day Rider Nation won't forget.

While in Vancouver, I was interested to see how the various teams there would be marketed and what signage there would be.  The winner was---------the WHL's Vancouver Giants.  I saw zero when it came to the Lions, the Whitecaps and the Canucks. Zero!  Why? Until teams start stepping up with marketing campaigns, they can expect to sit there and wonder why crowds are down. Yes, people may want to stay home and watch games on TV in a comfort-controlled environment, but it would seem as if our friends on the West Coast aren't trying-----or at least aren't trying in Richmond and at UBC.

I want to see Deshaun Watson play against Russell Wilson in a Super Bowl! My god that game was fantastic. One of the best I've seen.  When CFL fans tell you the NFL game is boring, show them this game. Classic!!!

I don't know who is winning this year's World Series, but I want it to go 7. It has been fantastic! The Astros and Dodgers are treating baseball fans to one heckuva series. We have just about seen it all in these games.  If you are a fan of either team, I don't know how you've survived.  It's like each game of the Stanley Cup final going into triple OT.   As for this baseball talk, how about we talk about how poor the pitching has been.  No one was talking about the baseball when the Dodgers bullpen were putting up zero after zero after zero.  At some point credit the hitters who are taking advantage of the many mistakes being made.


Richardson could be another Messam! I didn't think he would amount to much either, but he has been solid.


The World Series has been beyond great. That game was 5 hrs long, and I was hanging on every pitch from the 6th inning on.

Riders need to really pick it up after that effort. I realize it was Montreal, but still.

Can't be more obvious, Chad Owens in, the ineffective Rob Bagg out! Roghriders receiving lineup change from here on in to conclusion of 2017.


Canadian Bagg for import Owens. What other change are you going to make genius?

Bagg for Owens, you've gotta be kidding. Some of you posters that profess to be fans don't have a clue.


I hate the Seahawks, but that game was fantastic. One of the best I've ever seen/

Owens in for the ineffective Bagg! Mr. Everything Mr. Jones will figure out the team player ratio.

Scruffy, is it comforting knowing you get the same anonymous nutsacks posting on your blog that post on Rod's?

PS,
While Mr. Everything Chris Jones is at it, bench the weak legged kicker Crapigna immediatel, he's going to cost the team a crucial victory if not replaced by Quinn Van Glyswyk. Crapigna can't kick beyond the 30 yard mark for points, very weak.

To Mrs. Van Glyswyk; Crapigna hasn't missed a convert this year, how far are they from?

Kicking no pressure converts a foregone conclusion, easy peasey. Crapigna a very weak field goal kicker as evident in last week (other games) game against Montreal where he missed twice! That's 6 crucial costly points not on the scoreboard heading into the playoffs. Quinn... tried tested and true reliable strong leg! No question marks left hanging over his game. Crapigna, he's going to cost the team in a major letdown loss where he could have been the factor to a win.