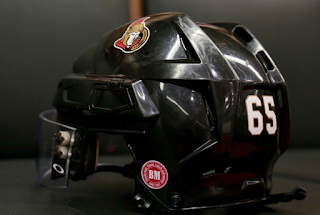 Former Regina Pats head coach Bryan Murray will be honoured by the Ottawa Senators this season with a special helmet decal.

Murray’s initials are at the centre of the sticker, with “family man, friend, coach and mentor” written around the circle. Murray passed away in August at the age of 74 after suffering from colon cancer.

Murray served as coach of the Senators from 2005-08 and filled the general manager role from 2007-16. He won the Jack Adams Award as the NHL’s top coach in 1984 with the Washington Capitals.

Before going to the NHL, he spent one season behind the bench of the Pats. In that season, Regina had 47 wins and won the league title.  It is the last time they have been WHL champions.

Ottawa kicks off its season Thursday as they are home to the Washington Capitals.
at 10/03/2017