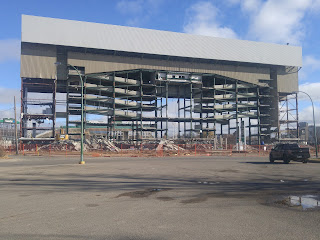 --How many people will show up at Taylor Field today as the west-side grandstand comes down?  I would think a great deal of Rider Nation will come to see it. Why wouldn't they?  Yes, what you have now is state-of-the-art, but Taylor Field is where your love of the game started.  It is where you saw Ronnie and George do their thing.  It is where you saw Dave Ridgway make kick after kick after kick, it was where you saw Bobby Jurasin, Bill Baker and John Chick sack opposing quarterbacks and it is where Darian Durant and the 2013 Riders won the Grey Cup on what is likely the biggest night in Saskatchewan sports history.

It will be interesting to see the looks on the faces of those who went to the archaic football cathedral to cheer on their team as the building comes tumbling down. Many have said the numerous pictures that have been taken since deconstruction started have been tough because of the memories they have watching the game in there. I completely agree.  While none of us would trade what we have now, there is no denying Taylor Field holds special football memories for many people in this city, this province and the CFL as a whole.

It is also ironic that the building that Durant brought joy to so many on that November 2013 night comes tumbling down on the same day Darian makes his first appearance at Mosaic Stadium as a member of the opposition.  Some will say Darian's career is crumbling away much like Taylor Field and the way this season has gone, they have every right to.  One thing is for sure and that is Darian doesn't think so. What type of reaction will he get? That is the hot topic of the day---at least if Thursday's Sportscage was any indication.

I am hoping those who realize what he did for this organization will give him the respect he is due. Yes, the ending was one I think both sides would like to forget, but at the end of the day, there is no doubting what Darian did for the Riders. The 2013 Western semi-final should be enough. Without those efforts, we aren't seeing him and others get the Grey Cup on their home field.

--The votes for CFL team awards are being made.  I do not get a vote.  If I were, it would go like this
You don't get a vote either, so who are your guys?

--I have nothing wrong with Vancouver, but I don't really want to hop on a plane and go there two straight weekends. I think the U of R Rams feel the same way.  It is winner gets home-field tomorrow afternoon at Thunderbird Stadium when the Rams meet UBC. Win the game and you host UBC next weekend in a Canada West semi-final. Lose and you do it all again in Vancouver next weekend.  I'm expecting playoff-type football from both teams with neither wanting to surrender anything. It should be a ring-a-ding-dong dandy. I'll have it all for you alongside Addison Richards at 2 o'clock SK time.

--Game 7 of last year's World Series was one to remember.  Game 2 of this year's World Series may have topped it. If you are a huge fan of the Astros or Dodgers, I don't know how you got through that one. Oh wait I do, because I had to in Game 7 last year!  From Vin Scully's appearance to the final out, it was must-watch TV.  I've said it once, I'll say it again----sports is the ultimate reality TV. You just can't write that stuff up.

--I'm not a Yankees fan, but they blew it in letting Joe Girardi walk away. No manager has won as much as Girardi since he took over the Bronx Bombers. Does this pave the way for Dusty Baker to move in? Somehow that may have made Yankee fans scream!

--The Vancouver Whitecaps had 25000 fans for a playoff game against San Jose. The BC Lions had a shade under 20000 for their home game against Edmonton. Please keep telling me how Major League Soccer is not a threat to the CFL.  The blame doesn't fall on the CFL here though, it falls on the Lions much like it falls on the Argos and Alouettes in Toronto and Montreal.  Marketing, marketing, marketing,  I don't know how much tickets are for both teams, but I am guessing it is more affordable to go watch the Whitecaps.

--With a month to go, the 105th Grey Cup is sold out. Ottawa is going to be a fantastic host. The fact the game is sold out with a month to go until the game is also a very positive sign for the league. There is a lot of good in the CFL, but sadly it gets overshadowed by the bad that at times can't be ignored.

--How much longer does Marc Bergevin have in Montreal? When he goes, will Claude Julien follow?

--Those who said the Vegas Golden Knights would be better than Arizona might as well just say they won that bet now. Will Arizona ever win? Who is the #1 pick supposed to be.  The Coyotes might very well be the Alouettes of the NHL. Oh wait, Montreal has at least won something.

-Is that BBQ smokehouse pizza from Little Caesars any good?  That commercial makes me want to buy one, but will I regret it after?


Is Bridge technically considered a Canadian?


Don't know if I have seen a better baseball game than Game 2.


With you on your picks except Top Canadian---I would go Muamba there. Is Bridge even considered a Canadian?