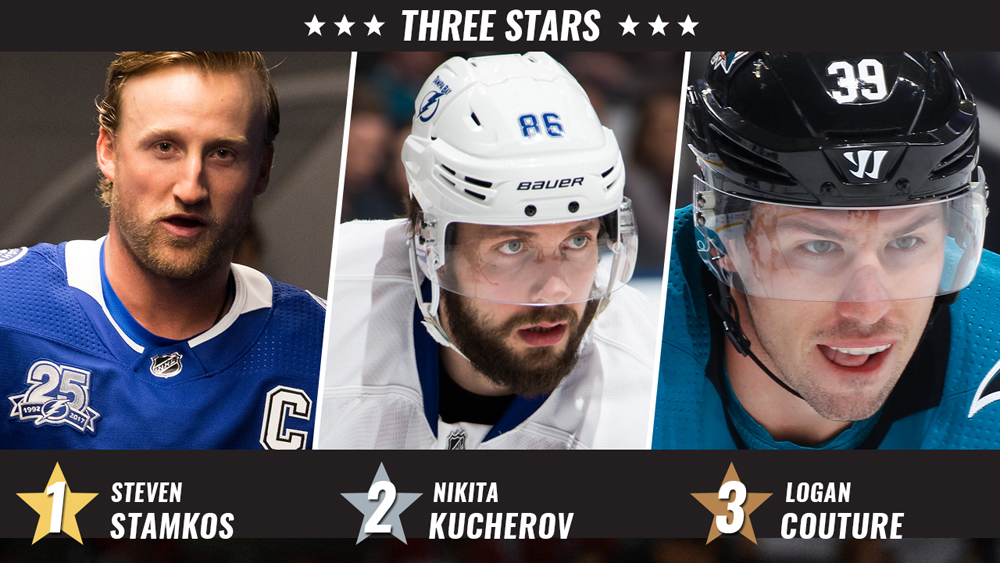 FIRST STAR – STEVEN STAMKOS, C, TAMPA BAY LIGHTNING
Stamkos posted four multi-point games, compiling a League-leading nine assists and 11 points (2-9—11) to power the Lightning (7-1-1, 15 points) to a 3-0-1 week and first place in the overall NHL standings. He collected two assists in a 3-2 win against the Detroit Red Wings Oct. 16, three points (1-2—3) in a 5-4 shootout loss to the New Jersey Devils Oct. 17 and two more helpers in a 2-0 triumph over the Columbus Blue Jackets Oct. 19. Stamkos capped the week with 1-3—4, including the winning goal and his ninth career four-point performance, in a 7-1 victory against the Pittsburgh Penguins Oct. 21. The 27-year-old Markham, Ont., native has registered at least one point in all nine of his appearances this season, pacing the NHL with 15 assists and 18 points. Stamkos is the first player to average at least two points through his team’s first nine games of a season since 2012-13, when Thomas Vanek accomplished the feat with the Buffalo Sabres (8-11—19 in 9 GP).

SECOND STAR – NIKITA KUCHEROV, RW, TAMPA BAY LIGHTNING
Kucherov shared the League lead with five goals and ranked second with eight points (5-3—8) in four outings to help the Lightning equal their best nine-game start to a season in franchise history (also 7-1-1 in 2003-04). He scored in each of his first two contests of the week, recording 2-0—2 (including the game-winning goal) in a 3-2 victory over the Red Wings Oct. 16 and 1-1—2 in a 5-4 shootout loss to the Devils Oct. 17. In doing so, Kucherov became the sixth player in the NHL’s modern era (since 1943-44) – and first since 1992-93 – to register at least one goal in each of his club’s first seven games of a season. He then added one assist in a 2-0 win over the Blue Jackets Oct. 19 and 2-1—3 in a 7-1 triumph against the Penguins Oct. 21. The 24-year-old Maykop, Russia, native also has posted at least one point in each of his first nine outings this season, tying for the League lead with 10 goals and placing second with 16 points.