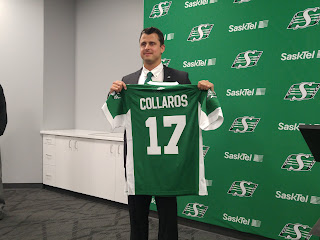 --Could Zach Collaros be back at quarterback for the Riders Thursday in Edmonton?  The team activated Collaros off the six-game injury list before heading out to practice Monday sparking speculation as to whether or not he will suit up.

Despite going 2-2 in the four games without Collaros, Brandon Bridge and the offence has struggled as was evident in Saturday's 12 point loss to Calgary.

The team also announced the signing of defensive back Marcell Young.  That is the same Marcell Young who levelled a fan who got onto the field at BC Place earlier this season. They also released former New York Giants defensive back Will Blackmon.
at 7/30/2018

Collaros was hurt in the pre-season game vs Calgary. He confirmed that today. What type of bozos do the Riders have for medical professionals?


One has to think this means he starts. Why would they bring him off one game early if he wasn't ready to go.

The bozo was Collaros himself by not immediately reporting/divulging the severity of said injury to Roughriders team staff, medical or otherwise!