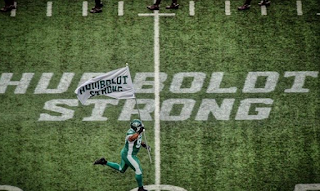 Before we get to the ugliness that was, I think we can all agree the salute and tribute to the Humboldt Broncos was tremendous. Did we really think it wouldn't be?  Craig Reynolds and the entire Riders organization get a tip of the cap for doing a fantastic job at something we wish they didn't have to do.  It was spectacular and the rainbow that emerged over the stadium following that tribute was somewhat symbolic.  It's as if the 16 who left us far too soon were watching and saying thank you.

Now to the game.  BARFFFFF!!! I hope the Alouettes left a "Thank you" card behind.   Those that have been criticizing World Cup soccer should know that the four games this weekend were all much better than the sludge you were treated to on the Mosaic turf.  It was awful.  It was beyond awful!

Where do you start.

1) The running game.  It was non-existent.  Why?  Would it not have made some sense to perhaps make it a little easier for Brandon Bridge if some run plays were called that could get you 3 or 4 yards? It was like there was no attempt to run the ball.  Was Jerome Messam 100 percent?  The fact he wasn't on the field surprised me.

2) The quarterback play.   Those that wanted Bridge got him. It was a chance for him to show us if he has it or not.  He was not helped by Marcus Thigpen on the game's first play when what was probably a touchdown was dropped, but Bridge did not help his cause one bit.  He threw two bad interceptions, he had happy feet, he was not what I was expecting.  David Watford said after the game he was "bad", but for someone who had never been in a regular-season game, I thought he had a better night than Bridge.  I think Bridge gets the start on Thursday against Hamilton, but who knows.  What I do know is Zach Collaros needs to get back a-s-a-p because the season could depend on it.

3)  Duron Carter:   This experiment has to end. It never should have gotten to this point.  It is clear to everyone from fans to other teams to the TSN panel that Carter is better served on this football team catching passes than defending them. Why you have arguably the game's most explosive player on defence is one I can't answer.  I asked Chris Jones in his post-game presser why this is being done.  Jones responded by saying we wouldn't be asking why he keeps Aaron Grymes (Edmonton DB) on the corner if he had two games like Carter was had.  That's true.  We wouldn't be asking the question because Grymes is not a guy who can turn around a game on offence because of his dynamic nature. Grymes is not a guy who will catch you 70-80 passes a year for 1000 yards and 7-8 TDs.  There has to be more to this story, but I'm just not sure what it is.

Chris Jones is a good head coach. He knows more about football than many of us.  His thought process on this one though is flawed.  It has to be corrected.  It would be nice if there were some defensive backs around to make it easier, but when you don't have any around, it makes it tough.  Michael Ball said Chris Jones the general manager isn't helping Chris Jones the head coach during the 620 CKRM post-game show.  I can't disagree with that.  It is somewhat inexplicable how there is a lack of defensive backs and how this team did not find some in the off-season.

There isn't much time for a turnaround as Hamilton is here Thursday night.  A better effort is needed, but after what we saw Saturday, anything will be better than what we Saturday right.  Right?

--Let's also admit there were some good things from the Riders.  Willie Jefferson, Naaman Roosevelt, Christion Jones and Brett Lauther all had superb nights.  Lauther has been a nice pick-up in the kicking game.  After missing his first of the year, I believe he has hit nine in a row.

--On Canada Day, the CFL had a chance to play a game. They said no. Why?  I am not the only one thinking that.  TSN's Chris Cuthbert and former Rider Ricky Foley were two asking that question. I really don't know why TSN wouldn't have given us a game. I think a Sunday night game against Mosaic or not having a Friday night doubleheader with one game being played Sunday instead would have been much better for the league.  Showcasing Canada's game on Canada Day seems like a no-brainer to me.

--How are TSN and Sportsnet going to devote equal air time to the Leafs, Auston Matthews and John Tavares?  Johnny T never had the spotlight shine on him the way it will now.  Matthews might be the happiest guy now that Tavares is a teammate as he may be able to do his thing without being pressed every day. That honour goes to Tavares now.  Toronto fans are excited and they should be, but I don't think they are the class of the East----not yet!  They need more help on the blueline.  It may cost them a William Nylander, Mitch Marner or maybe even a Nazem Kadri in a trade, but they need at least one more solid blueliner who can complement Morgan Rielly.  If they get that, the discussions can begin in earnest.

Tavares gets 7 years at 11 million.  You can't tell me you can add some corporate sponsorship money to that either as companies will be lining up to get his face on products.  Maybe even 7-11 can get involved after that salary that was signed.   Safe to say you will probably see as much John Tavares on your TV as you do Connor McDavid.

--At this point, I can't see the Toronto Blue Jays getting anything for Josh Donaldson. Why would teams want damaged goods for a playoff run?  Any return will not be what they could have had had they done the right thing and traded him in the off-season instead of fantasizing about competing in the American League East. What they should do is perhaps trade Roberto Osuna.  His time in Toronto has to be up after his domestic violence issue, but it appears GM Ross Atkins wants him to be a part of the present and future.  Osuna would likely get you a rich return even though he has had his issues.

--Lebron James has become "LA"Bron James as he will try to get the Lakers back to the promised land in a very competitive Western Conference.  Can James get LA past the Warriors and Rockets. The days of the Golden State-Cleveland finals are over.  Do Raptors fans think this gives them the inside track?  I think we saw they are a team that isn't built for the playoffs this past season.  Making Dwane Casey the scapegoat and staying pat will not translate well.

--That's all I got. Have a great holiday Monday!

Whether it's 'poor recruitment' or 'lousy coaching' the answer is the same. Chris Jones is the real problem. He's a DC and that's all.

Maybe TSN didn't want to compete with Canada day festivities the ratings and attendances are already down why exasperate the problem.

Lets just hope that we don't see Willie Jefferson moved over to the offense!

1) They didn't have a problem with Canada Day festivities last year. The Riders were at home July 1 and the game was on.

2) There was nothing to compete against as the soccer was over and with five channels, all five weren't on NHL free agency

3) Attendance is up this year.


Come take another swing in the batting cage, because the first attempt was quite weak.

Chris Jones is a great coach, but he is a terrible GM.


If there is any league where salaries are out of control, it is the NBA. I lost interest several years ago. I might have watched about 5 games this year. Basketball is a great game, and I go to a lot of Huskies games, but the NBA is no longer entertaining to me.


If Canada Day falls on a Tuesday or Wednesday, I can understand not playing a CFL game. The league seems to be shying away from Sundays this year which is good when the NFL is on, but I would have loved to have been at or watched a CFL game last night.

Did the Riders not play on July 1 at home last year?


I think what everyone wants to know is has Sheldon recovered from his epic meltdown on the post-game show. That was more entertaining than the game.

We dressed how many LB's on Saturday? Messam doesn't see the field.

We got beat by a team that may not win 4 football games this year.

The time for excuses is over.

Jones can't be both HC and GM. What other team has that in the CFL. If he is giving authority to Murphy, then that is an epic fail. It was clear a long-time ago Murphy was riding on Huffer's coat-tails in Calgary.

Stamps lose guys and get quality guys to replace. It happened when Murphy was there and it continues. Murphy wasn't the reason. He pulled the wool over Jones' eyes.

I have zero confidence in this team winning Thursday night and will be shocked if they come within two touchdowns of Hamilton.

That was epic hilarious! Lmao! Agreed, Sheldon wayyyyy more entertaining than the game. He had the 620 CKRM post-game host shaking in their boots.

Ok the game was awful but so were the soft officials calls.Seemed to be flags on every play. The CFL rules committee has to rethink all the rules and how efficient the ref's are at calling every one of them except when one of our receivers was clearly out of bounds and the play over when a MTL player banged into him knocking him over. There was a penalty on the play but to my surprise it was holding or something with nothing said about the missed roughing call. What has destroyed my interest in watching CFL games is the festival of flags every game.

Sheldon has some serious issues, when you get that upset over a game time for some therapy. If he has any friends hopefully they check on him to make sure he is ok.


Sheldon is as entertaining AF, but the guy also has a screw loose to take it that seriously. Dude, its just a game. The sun came up the next morning.

There are way too many people that have their lives dictated by whether or not the Riders win or lose.

One of my neighbours used to be that way. Thankfully he moved!