Bridge or Collaros? Chris Jones Not Saying Who Riders Starting QB For WSF Is 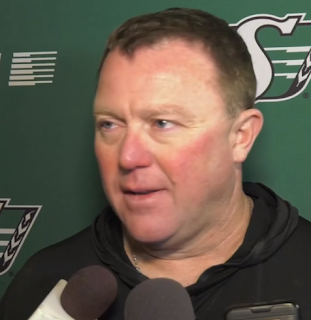 If Chris Jones knows who his starting quarterback is on Sunday, he isn't letting anyone know.

Brandon Bridge took a majority of the first-team reps at what was a frigid practice at Mosaic Stadium on Friday.

When asked if that was an indication of what we would see Sunday, Jones replied with "He took a lot of reps. We've got both guys preparing to play.".  When asked if Zach Collaros is still his starter, Jones responded with "You guys place way too much emphasis on that. We're gonna prepare both guys like they're going to play and we'll see who plays."

Collaros' health and status has been in question since he took a helmet-to-helmet hit from Odell Willis of the B.C Lions on October 27.

The Riders and Bombers meet in the Western Semi-Final Sunday afternoon at 3:30 in a game you can hear on 620 CKRM and watch on TSN.

Sure hope that Jones puts Rob Bagg in the starting line-up Sunday just for the offense player intros for his last game as a Rider. It would be one way to get the crowd fired up when they announce his name over the PA.