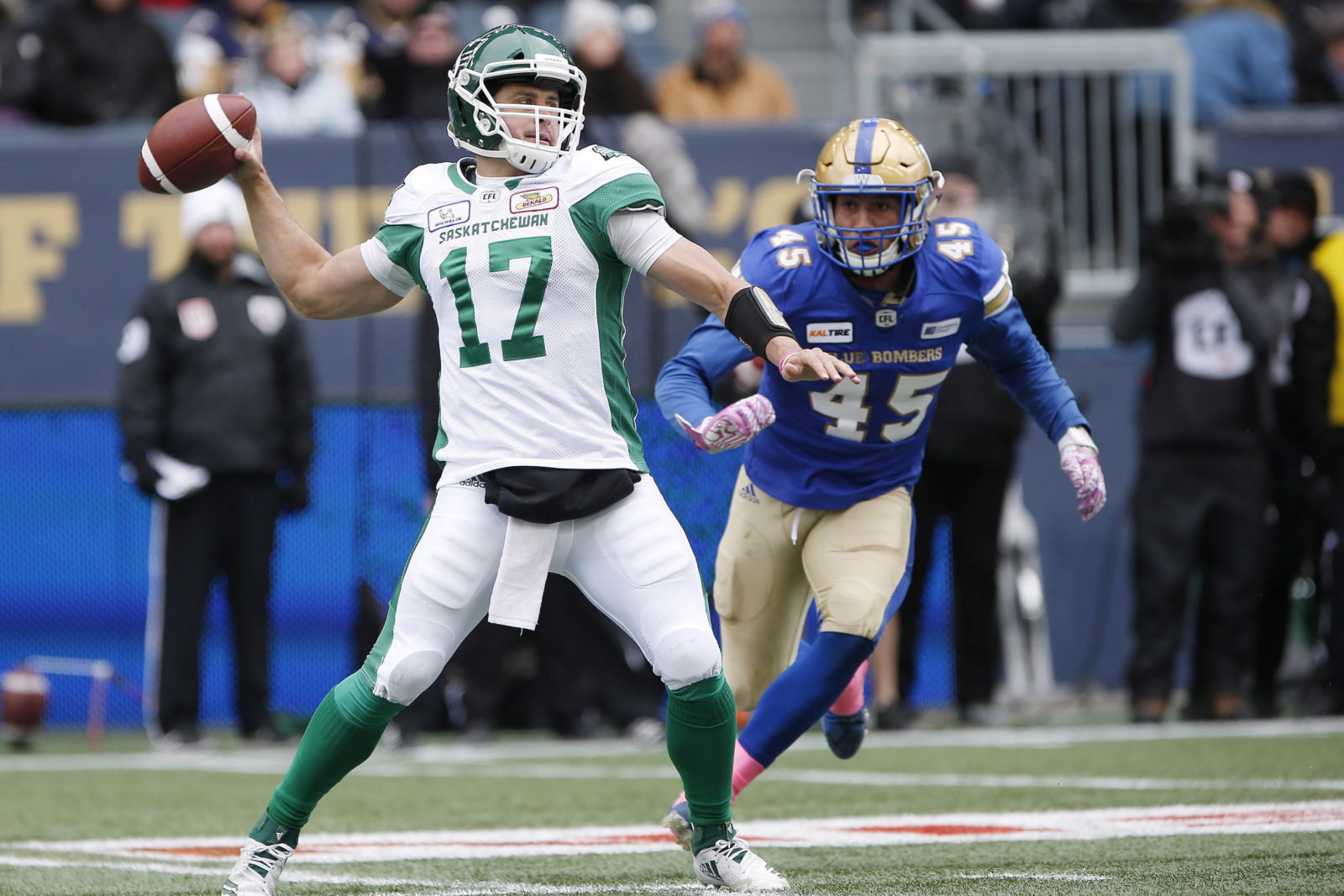 --It is going to be Labour Day like on Remembrance Day! It's going to be a long weekend so I will be expecting the atmosphere outside Mosaic Stadium to be just like it is on Labour Day if not more considering what is on the line.  Willie vs Weston, Harris vs Hughes! The Bombers vs the Riders for a trip to the Western Final.  It's the first time the teams have had a playoff game since the 2007 Grey Cup game and it is the first Western Division playoff clash since 2003! I think we all remember Kenton Keith running wild on a frozen Winnipeg Stadium turf and Nate Davis peeing on Khari Jones. It is going to be a fun week around here!

--If I am wrong, I am wrong, but I sincerely believe when the Riders get back to work this week that Zach Collaros will be on the field.  Collaros was signing autographs, taking pictures and smiling during an autograph signing on Saturday.  If Collaros wasn't ready to go, he wouldn't have been at the event and would have been replaced.  I just don't see Chris Jones allowing someone to spend an afternoon signing autographs if he weren't ready to go. I wouldn't blame him either.  I would say Zach is back which is good news heading into the playoffs.

--The storylines going in will be many and there will be a focus on the quarterbacks.  Say what you will, but I say the pressure is all on Matt Nichols.  He has never won a playoff game.  He goes up against a defence that will come to play.  This game will not be an easy one for the Bombers like their 31-0 win a few weeks ago.  Nichols is going to have be on the top of his game if Winnipeg is to win.  This is a game where Nichols can silence his critics. Those critics (and I am one of them) say he hasn't done anything until he wins a playoff game. It is the same thing we have heard the last two years and what has happened.

--Waking up Saturday morning to hear Marc Trestman had been fired by the Argonauts was and wasn't surprising.  It was surprising for the fact that Trestman won a Grey Cup a year ago and that he lost his starting quarterback early on in the season.  I would have thought his track record would have bought him some more time.  It seemed though as if the relationship between he and Jim Popp started to dissolve at some point during the season.  The Duron Carter signing may have been the last straw. Popp wanted him, Trestman didn't. He didn't play even though he was dressed.

Where does Trestman's future take him now is the question many are asking.  He certainly will be on the radar of many.  When in Calgary a couple of weeks ago, I heard if Jason Maas gets the boot in Edmonton which it appears he will, don't be surprised if Trestman ends up in Edmonton.  It may be an incentive for Mike Reilly to stay in the Alberta capital.  We'll see!

--Reilly certainly sent a message to his team on Saturday versus Winnipeg by going 29 of 35 for 320  yards.  If he doesn't end up back with the Eskimos, it won't be good for Brock Sunderland who is already under pressure after not making the playoffs.

--As you know, I think it is time for the CFL to scrap the East-West format. Once again, we are seeing a crossover. How many years in a row have me now seen that? This will be the 10th time in the 22 years that the crossover existed that we will have seen a Western team compete in the Eastern playoffs.  If the league would have adopted the one nine-team conference as I have been lobbying for, we would see one Eastern team in the playoffs.   When all was said and done, the standings went like this

If you give the top two teams a bye, you have Calgary and Saskatchewan 3 would play 6 meaning Ottawa would be home to Edmonton with BC in Winnipeg in the 4-5 game.  Calgary would play the lowest seed remaining in one game on the 18th, the Riders would get the other team.   Winnipeg gets a home game, Edmontn gets in the playoffs and Hamilton doesn't get a home game that it gets for finishing 2nd in a once-again weak East.

As I have said in the past, if the CFL gets Halifax in the league to make it a 10 team loop than we can go back to East vs West.  We can scrap the crossover.  The CFL showed with the crossover it doesn't care about a traditional East-West Grey Cup and if the truth be told, the league is lucky that the nine teams previous have failed.  Imagine if the top two teams met in the Grey Cup.  A Calgary-Riders GC would be what the league wants since its the two best teams going at it right?

--There is no doubt the University of Regina Rams took one right in the teeth this year as a season that had some promise was taken away from them.  On Friday morning, I received an e-mail with the all-star nominations for Canada West.  I expected to see many Calgary Dinos on that list seeing they are #1 in the country, but I thought I would see at least three Rams if not more on the team. NOPE!  It is inexplicable and insulting that guys like Kyle Borsa, Ryan Schienbein and Cole Benkic were not recognized for their play on the field.  Theren Churchill might have been another one who was snubbed.  The coaches apparently pick the all-stars.  There are 5 coaches in this league who should be ashamed of themselves.

Borsa had the most rushing TD's in the conference and was 2nd in rushing and all-purpose yards. Schienbein was 2nd in receptions and tied in 2nd for TD's.  That's apparently not all-star worthy in the eyes of some.  A team that was 4-4 (which is what they technically were) was disrespected bigtime.  I am sure that will be remembered moving forward.


--A headline in the Toronto Sun this week "What if Bobby Orr had been a Maple Leaf?".  One can only imagine!

--Results from the women's games aside, it was a great weekend at the U of R as the basketball seasons started.  Dave Taylor's squad lost Kyanna Giles early in the first game for the weekend due to injury and it seemed to have a real negative effect on them as they could not find any rhythm Friday losing with much the same happening Saturday.

As the buzzer sounded, I could not think of a previous time in all the years I've been watching this team that they have lost back-to-back regular season games at home, but it was in 2015 to UBC. 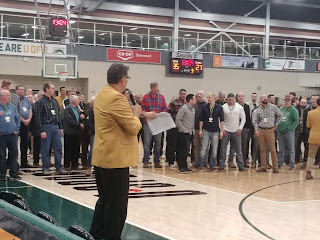 As for the men's team, they are fast, they are entertaining and they are fun to watch. Having many alumni in attendance was great and there were a lot of them in town for the weekend.  They had to enjoy what they were seeing. Former coach Ken Murray said it would be nice to see this team get to a national championship like he did back in 1989 in what is the only appearance the U of R has made at the event.  He told Steve Burrows to get this team there.  That may be a tall task in a very competitive Canada West, but I am looking forward to see that team take its best shot.  Imagine a year where both teams made it to nationals!!  Yes, despite this weekend's blip, I expect Taylor to have his team in Victoria at the end of the season.

--How is the new Costco? Many of you reading this have likely checked it out during its first days of operation. Early reports I have is it was just as much a gong-show as the old place only moreso because of the size of said building.  There are times one can go to a Costco and it is alright.  That time will be a ways away for me.  As Mrs. Scruffy said, we might just wait until the New Year.  I'm OK with that!!


That's all I got. Have a great week

Let's go one step further. Scrap the 18 games and go with 16 with each team playing each other twice. Balanced schedule and we could kill two weeks off the sked meaning an earlier GC which is what many want.

Willie Desjardins back in NHL with LA!


Agree on Nichols. He hasn't been able to get it done in playoffs.

If you have any readers who are younger than 30, they may have gotten the wrong image in their head about a Rider named Nate Davis peeing on another player.

Trestman has a lot of issues to deal with in his personal life. It wouldn't surprise me if he shuts it down for a couple of years if not permanently. It's time to be with his family and not continue on with the day-to-day life of football.


Nice job on the mic again this weekend Scruffdog! A lot of old faces back in the gym Saturday night. Think the womens hockey team is celebrating 25 years this weekend!

If Bobby Orr had been a Leaf I wouldn't have the affection for him that I have. The Toronto media would have made me sick of him.

The only Jersey Bobby Orr looked good in ... Team Canada.