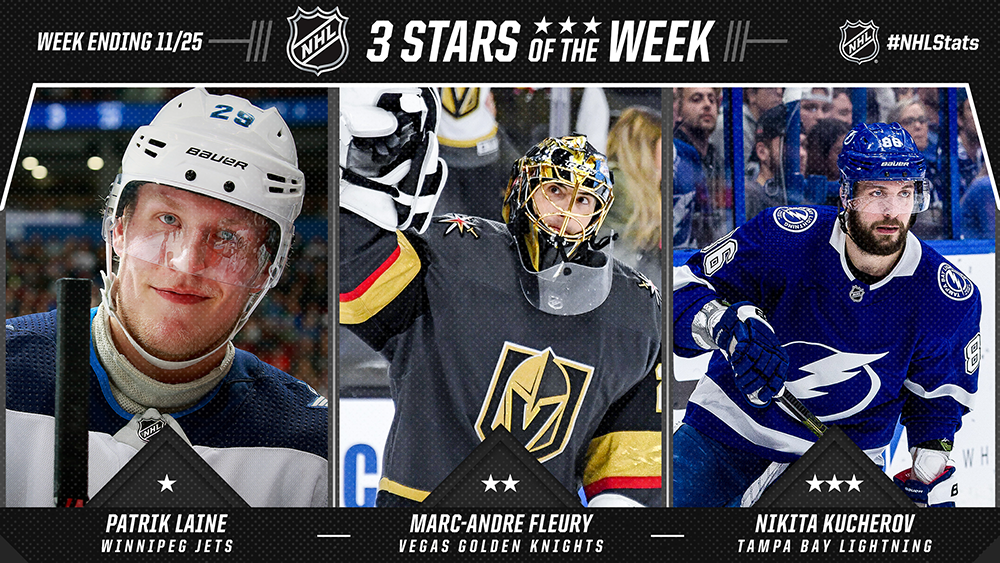 Laine led the NHL with 11 goals (and points) in four games to power the Jets (13‑7-2, 28 points) to a pair of victories. He scored his sixth career hat trick, including the winning goal, in a 6-3 triumph over the Vancouver Canucks Nov. 19. Laine added two more goals in a 6-3 loss to the Calgary Flames Nov. 21 and then one goal in a 4-2 defeat against the Minnesota Wild Nov. 23. He capped the week with a career-high and franchise-record five goals (including the winner) in an 8-4 victory against the St. Louis Blues Nov. 24. In doing so, Laine registered the 57th five-goal performance in NHL history as well as the first since Feb. 2, 2011 (Johan Franzen). At 20 years, 219 days, he became the third different player in League history to post a five-goal game prior to his 21st birthday, joining Wayne Gretzky (2x) and Don Murdoch. The Tampere, Finland, native paces the NHL with 19 goals and three hat tricks in 22 contests this season (19-3—22). His 16 goals in November (16-1—17 in 10 GP) are another Jets/Thrashers record as well as the most by any player in one calendar month since December 1996 (Mario Lemieux: 17-10—27 in 15 GP).

Kucherov shared the League lead with seven assists and ranked second overall with nine points in four games (2-7—9) to propel the Lightning (17-6-1, 35 points) to a trio of wins. He scored once in a 3-2 loss to the Nashville Predators Nov. 19. Kucherov then posted consecutive three-point performances, registering 1-2—3 in a 7-3 triumph over the Florida Panthers Nov. 21 and matching a career high with three assists in a 4-2 victory against the Chicago Blackhawks Nov. 23. He closed the week with two more helpers in a 5-2 win over the New Jersey Devils Nov. 25. The 25-year-old Maykop, Russia, native shares third place in the NHL with 23 assists and places fourth overall with 32 points in 24 appearances this season (9-23—32).