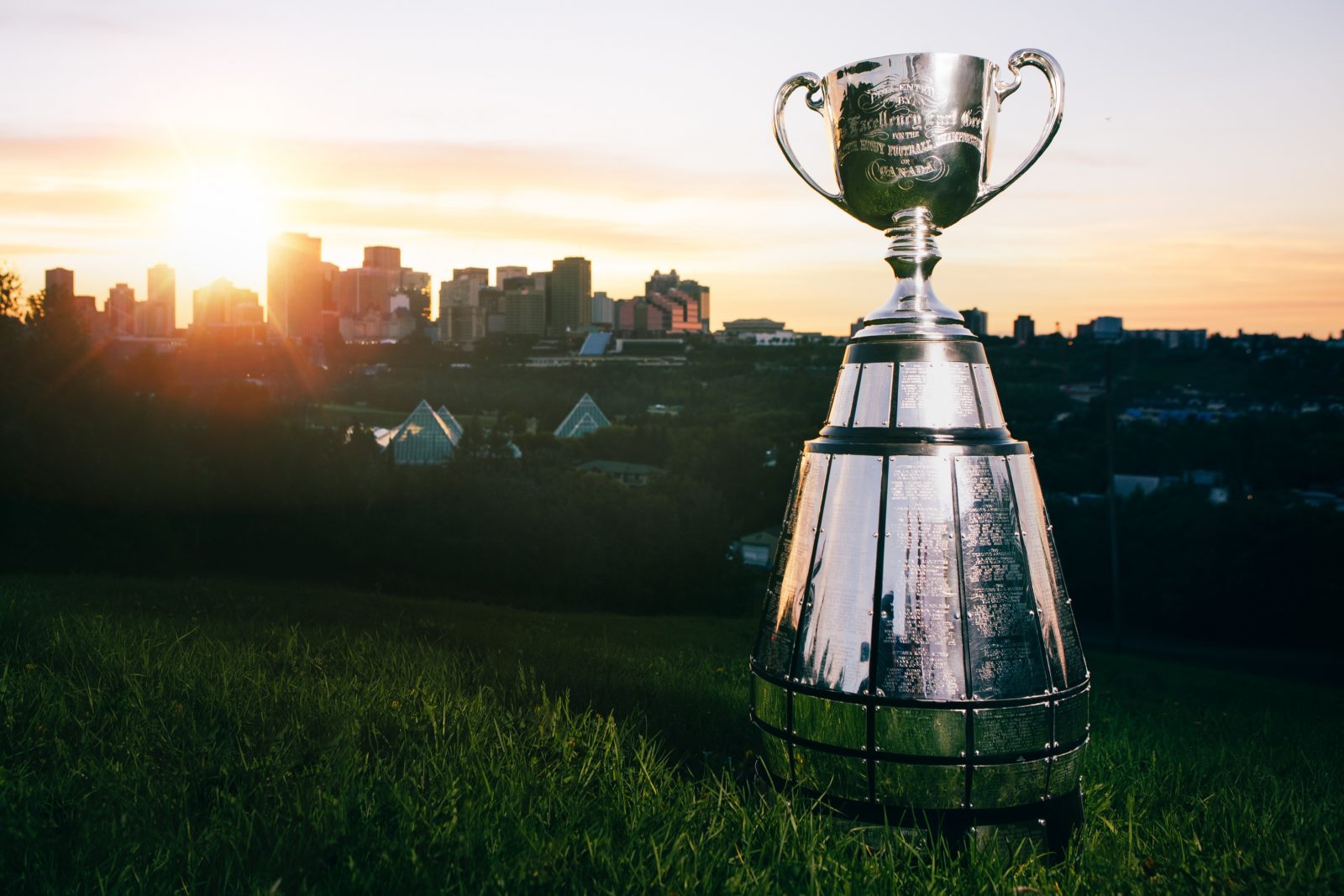 --It will be Ottawa vs Calgary next Sunday in the Grey Cup.  Are you excited?  One team has been there (Calgary) in four of the last five Grey Cups and the other team has been in three of the last four.  It is only a nine-team league, but the same two teams are there.  No one is apologizing in Calgary and Ottawa for that, but how much interest is there across the country  We'll find out.  It will be a great week in Edmonton and it should be a pleasant day for football with temperatures forecast to be in the minus 4 range for a daily high.  The week would obviously be better for Rider Nation if the green-and-white were playing, but that train has sailed out of the station, Who ya got?

--More on what transpired yesterday in a moment, but let's go back to Saturday where once again it was proven that those in charge of Canadian University Football have their heads solidly stuck up you know where. Canadian University Football doesn't get the publicity it deserves for a variety of reasons and all of them are valid.  When the game is showcased on national TV, the Laval Rouge et Or completely embarrass the champions of the Atlantic League from St. Francis Xavier 63-0 in one of two national semi-finals.  As Arash Madani, who called that disaster on Sportsnet, rightly said on the Sportscage last week, the Atlantic Conference champion is not going to a Vanier Cup anytime soon.  Their representative usually gets blown out of the water come national semi-final time.

I don't know why USports Canada is so resistant to change, but they are.  The model they have now is broken and they don't seemingly want to embrace one put forth by the "czar of Canadian College Football'  Jim Mullin.  Mullin suggested a Northern 8 formula in which the top eight teams in the country would battle for the Vanier and not just the conference champs---one which is oh so weak.  It is a great idea.  There are some things that would have to be tinkered with, but it is the way to go.

Canadian University Football isn't on the radar of many people and when it is shown on a national stage, you get a 63-0 game.  How does this grow the sport?  It is inexplicable as to the buffoonery being shown by the suits at the national body.  They have to sit down and look at a way to make the game better---especially at this time of year.

--Now to what transpired in the CFL.  Trevor Harris let everyone know he can win a playoff game and he let everyone know in convincing fashion What a performance!  The West Final was what I thought it would be, but Dave Dickenson is getting all the attention post-game and likely will throughout Grey Cup week after some interesting statements caught on video.  What exactly did Dickenson say?  It sure sounds like he said what we all think he said, but after listening to the tape several times, I don't know if that is the case. If he did say it, he is wayyyyy out of bounds.  However, Dickenson may know exactly what he is doing.  He knows that his team will have to answer questions for their inability to win the past two years.  If he is deflecting attention off of that to himself with his statements which were oh so wrong, he has done the right thing.   One has to wonder what happens with Dickenson if he gets to the Grey Cup for a 3rd straight year and loses. Huff won't be happy.  Let's see where this goes.  How about Dave going all WWE heel with his post-game comments following the trophy presentation as well!! I think its fair to say many hate Calgary already, but they will definitely go into Edmonton wearing the black hat!

As for the game, I said going in Winnipeg barely got by a Saskatchewan team that didn't have a quarterback.  The Winnipeg offence didn't show up and as a result, their Grey Cup drought continues.

--Did anyone catch Terry Jones' story in the Edmonton Journal Friday in which he reported the legacy of this year's Grey Cup will be 500,000 dollars which will help go to put a dome over the playing surface at Commonwealth during the winter months.  It would allow the facility to be used year-round.  Hmmmm!!!  One wonders if something similar could be done at another stadium we've become familiar with---especially if that stadium and the football team that calls it home is the host venue for the 2020 Grey Cup.

--If you watched Saturday's Battle of Alberta between the Oilers and Flames, you had to have been entertained---at least for the first 40 minutes.  The first period was maybe the best 20 minutes of hockey I had seen in a long while.  Sam Bennett got it going when he clobbered Darnell Nurse with a good clean open-ice hit and it was ON!  Big hits, scoring chances, fights, scrums, it had it all.  It was great!  You don't see intensity like that for a regular-season game very often.  In the end, Calgary took it to Edmonton in the 3rd for a 3-2 win, but the score wasn't the story on this night.. It's too bad more teams couldn't do what the two Alberta teams treated us to on a regular basis.   After watching the Oil on Sunday, they simply can not continue to put Cam Talbot in net.  As has been stated before, until this team gets a goalie it can count on, they will not win.  It will cost Peter Chiarelli and Todd McLellan their jobs. Is that fair? In Chiarelli's case it is, in McLellan's, that's up for you to decide. When the GM doesn't give you the proper tools to work with, it is tough to be successful and Chiarelli has not helped McLellan out one bit.

--Saturday was a great night to be at the CKHS for some Cougars basketball---especially on the mens side.   While the women mollywhopped Manitoba for a weekend sweep of the Bisons, Steve Burrows' squad was looking for a split and as the clock started to tick down in the 4th quarter, it didn't look good as the home team was down 9 with just a couple of minutes to go. 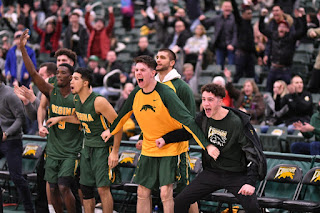 In one of the more dramatic men's games I've seen at the CKHS, the Cougs clawed their way back into it and won it with just seconds to go on a Ben Hillis layup.  The place understandably went nuts.  This squad is maybe the most entertaining Cougars team I have seen in quite some time.  They are a lot of fun to watch.  Both will be back at home on the November 30th weekend for what should be another solid weekend.

--Analytics is apparently the reason the Arizona Coyotes drafted Dylan Strome ahead of Mitch Marner.  How is that working out?  I don't know about you, but this analytics shtick and number crunching has wayyyy too much relevance in the game.

--Better Moose Jaw Warrior alum---Morgan Rielly or Brayden Point?   I don't think anyone who saw these two play junior should be surprised that these two have become NHL stars, but one could argue they are in the top 20 of players this season

--If you are squeamish and you haven't seen the Alex Smith injury, don't go hunting for it.  If you have that need to see it, it shouldn't be hard to find.

--The Chiefs and Rams will be a great Monday night game, but neither will walk away as the best team in the NFL.  That honour goes to New Orleans.  They have it all.  It wouldn't surprise me if they don't lose another game this season.


Winnipeg would not have won had Collaros played last weekend. Winnipeg met a team with a top-notch quarterback and failed. Should we be surprised at this?


Edmonton-Calgary Saturday night was great! I'm not a fan of either, but you could see the intensity right from the opening puck drop. Did anyone notice no member of the Oilers went after Bennett after his hit on Nurse. Nurse policed it himself the next time the two were on the ice. That is the way to do it instead of having someone jump the guy delivering the hit to send a message.


I listened to that tape of Dickenson. The audio gets cut off so it is tough to hear what exactly he said. Didn't he do something similar with his brother here this year?

Last week against the Riders the Bombers owned the line of scrimmage. This week Winnipeg's hoggies got their butts kicked. I don't think Collaros fixes that. It's just an illustration of how far behind the Riders really are.

Did I miss something because what I heard Dickenson say wasn’t that bad, not sure why anyone should be offended.

Speaking of Warriors in the NHL, how about Brett Howden making the Rangers at 20 and playing at the level that he has!

If Bo Levi goes to the NFL it will be a big loss for the CFL, a league with a very shallow pool of QB talent. The NFL is incredibly wonderful to watch because of the influx of talent at QB.

A dome over Mosaic at the right cost in winter months would be the way to go for a variety of reasons.

You couldn't have concerts or things though because the seats wouldn't be domed, but having the ability to stage events on the floor of the facility would be big for many reasons.