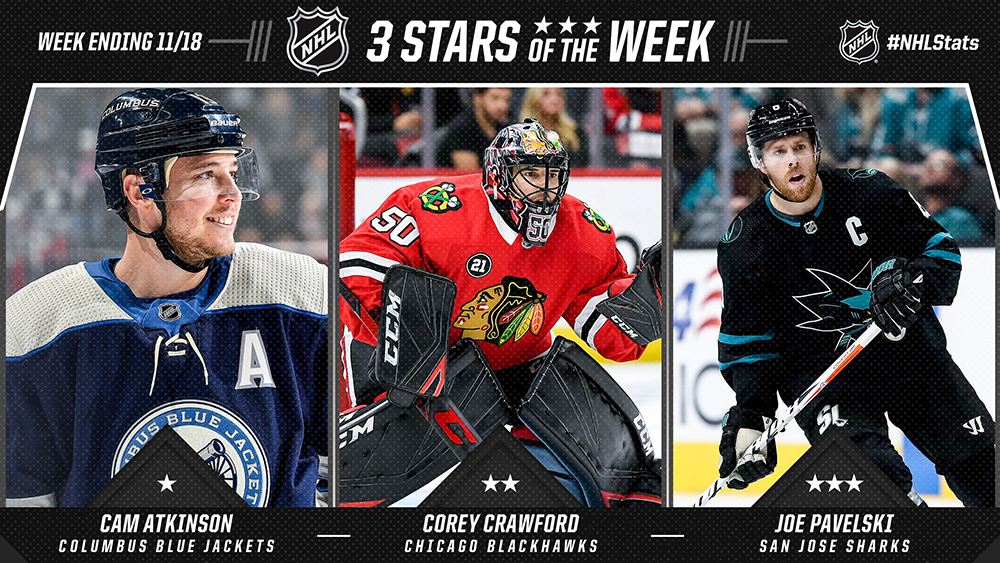 Atkinson paced the NHL in goals (t-5), points (8) and plus/minus (+6) in three games help the Blue Jackets (12-6-2, 26 points) record a perfect week and extend their lead atop the Metropolitan Division. He registered 1-1—2 in both a 2-1 victory over the Dallas Stars Nov. 12 and a 7-3 triumph against the Florida Panthers Nov. 15. Atkinson then capped the week with 3-1—4, including his fifth career hat trick and 32nd career game-winning goal (all w/ CBJ), in a 4-1 victory over the Carolina Hurricanes Nov. 17. In doing so, he matched Rick Nash for the most hat tricks in Blue Jackets history. The 29-year-old Riverside, Conn., native shares eighth place in the NHL with 12 goals while ranking second on Columbus with 20 points in 19 outings this season.

Pavelski collected multiple points in all three of his games, sharing the League lead with five goals and placing third overall with six points to lift the Sharks (11-7-3, 25 points) into first place in the Pacific Division. He scored twice in a 5-4 victory against the Nashville Predators Nov. 13, posted 1-1—2 in a 5-3 loss to the Toronto Maple Leafs Nov. 15 and added two more goals in a 4-0 win over the St. Louis Blues Nov. 17. The 34-year-old Plover, Wis., native is tied for fourth place in the NHL with 13 goals in 21 outings this season (13-3—16). Pavelski’s 330 career goals rank 13th in the League since he made his debut in 2006-07.