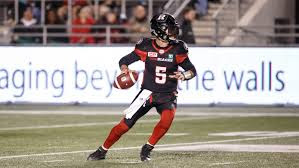 Is it a sign about the health of Zach Collaros or not?

Tate, who started his CFL career in Saskatchewan before going to Calgary and Ottawa, retired before the start of the season to take a position as coach at Coastal Carolina University

Over his career, the 34-year-old has amassed 5,008 passing yards, 35 touchdowns and 16 interceptions, completing 67 per cent of his passes.

He joins Collaros, whose status is unknown after he left the last regular-season game of the year following a helmet-to-helmet hit, Brandon Bridge and David Watford as quarterbacks on the roster.

That wasn’t the only move the team made on Saturday.

They also announced they have signed kicker Quinn Van Gylswyk.

Van Gylswyk was taken in the 3rd round of the 2016 CFL draft, 26th overall.  He spent the 2016 and 17 seasons in Saskatchewan before signing with the Alouettes in the off-season where he did not suit up in any games.

The 27-year-old will serve as depth should something happen to either Josh Bartel or Brett Lauther.


A) Collaros is done
B) No confidence in Bridge

Brilliant signing. How great would it be to see Tate beat the Stamps in the final and then hoist a Grey Cup for the Riders!! If Collaros is done this season and perhaps next, then this signing gives us a glimmer of hope.

Oh yeh, there's no doubt Tate will lead us to the promised land. (Sarcasm off)

I like the signing but really how much in game shape is he? He retired in June didn’t play much last year. Our defence will have to play better than the regular season to win us a cup. Not sure how the D can play any better. If Bridge has to carry us we are toast.

Take it easy Riderville, don't get your shorts tied up in a knot you incapable of decipher, Drew Tate is a proven winner.