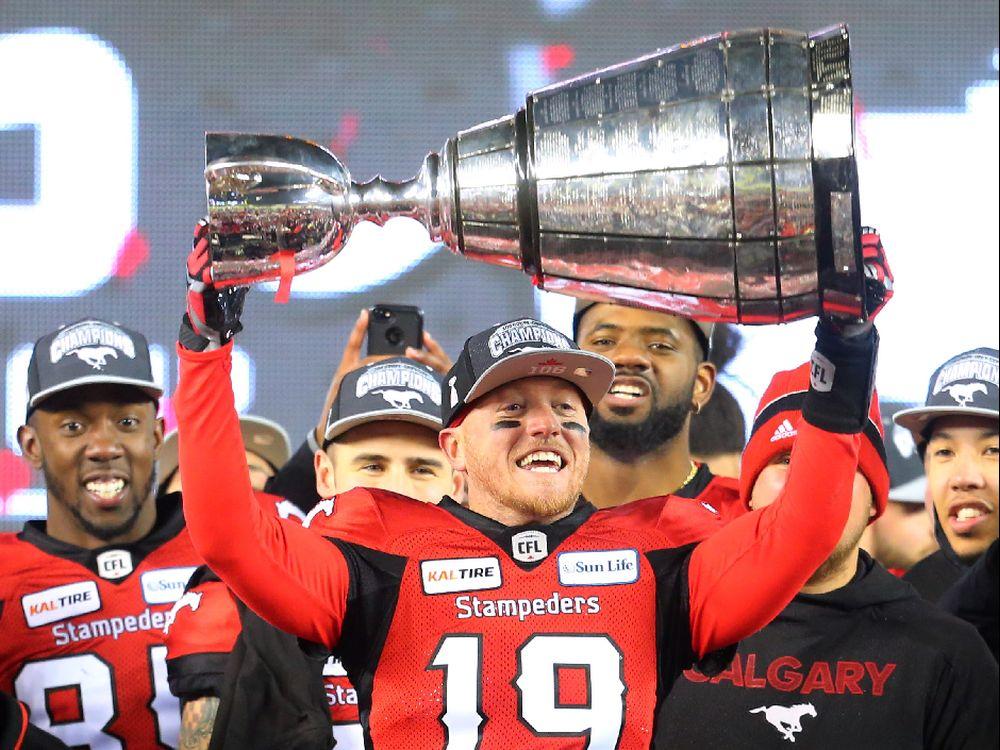 --The 106th Grey Cup and the 2018 CFL season is over.  The "choker" label that the Calgary Stampeders had can go out the window.  They got it done in their third straight appearance in the big game beating Ottawa 27-16 in a game that basically was over on the final play of the first half as far as I am concerned.

Why Richie Leone didn't punt the ball out of bounds is the question I and many others have. If you do that, you don't give Terry Williams the opportunity to skate 97 yards down the field on the last play of the first half to expand Calgary's lead to 10.  I am guessing he would have been told to do so, but he didn't and Ottawa paid.    At the end of the day, special teams killed the Redblacks as you add that to a Diontae Spencer fumble in the 2nd half that Calgary recovered and it was a good night for that area as far as the Eastern champs were concerned.  Ottawa never seemingly recovered from the Williams touchdown and while there were glimpses of them possibly making it a game, it was basically over.


So now, we go to what might be the most tumultous off-season we have ever seen.  A new CBA has to be done and I don't think those negotiations are going to be smooth.  You have this stupid salary cap for coaches and football operations, you have the Alliance of American Football which surprisingly was not brought up by Commissioner Randy Ambrosie during his "State of the League" address on Friday, you have the state of officiating and the role of the command centre to deal with. It should be a winter where the CFL doesn't go away when it comes to making headlines.

--It's no secret I love football.  Whether it be CFL, USports, NFL or NCAA, I love sitting down and watching the games.  Last Monday's Chiefs-Rams game was spectacular, but that was only the start.  The Michigan-Ohio State game was a huge letdown, but Washington and Washington State provided a thriller in a snow-globe on Friday night as did some other games like Oklahoma and Virginia Tech that ended 59-56.  The game we didn't see though was the LSU-Texas A&M game.  I would have loved to have seen that seven OT 74-72 battle.  That was a real-life Madden game!

--Those who thought the Seahawks had seen their window close might want to re-think that stance.  The team that was supposed to be in a rebuilding mode looks like they could be a playoff team after a big win over Carolina.  The team has not allowed Russell Wilson to be the player he can be, but when they need a play, Wilson delivers as he did in the final 5 minutes at Carolina.  With four of their final 5 at home, I think they may find themselves in the playoffs again.  Realistically, I don't know how that is with a defence full of no-names, but they are getting it done when they need to.

--Are Packers fans just waiting for the season to end so they can fire Mike McCarthy.  The ones I know can't wait.

--Dare I say it is Baker Mayfield finally the quarterback the Cleveland Browns have been looking for.  I was surprised to see him go number one, but it appears as if he is the guy to get them out of the years of misery they have had.

--Check the top of the NHL standings.  Yes, the Buffalo Sabres are one point behind Tampa and Nashville for the most points in the league.  The Buffalo Sabres!! The youth this team has assembled over the past few years is finally paying off.  I haven't really watched Buffalo play this year, but they are obviously a team to check out with the likes of Jeff Skinner (who is going to GET PAID in free agency if he gets there),  Jack Eichel, Rasmus Dahlin, Rasmus Ristolainen and others.

--How cool was Hockey Night in Canada bringing back the blue blazers for charity on Saturday night.  I heard Ron McLean talking about those blazers on NHL Radio and how uncomfortable, yet how iconic they were. 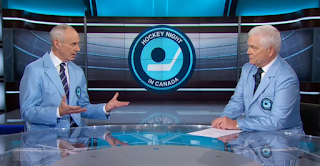 Seeing McLean and Dave Hodge sit down and talk Hockey Night in Canada was amazing.  Like many of you, these were the two gentlemen you have spent many a Saturday night with over the years.  If you are old enough, you remember the Dave Hodge pen flip. It was amazing. I had never seen that before on TV.  The outrage Hodge had with his employer that night and the raw emotion that came out was something you don't see a lot of these days.   The segment with these two can be found right here.  It is six minutes of must-watch!

- Look at this dandy from the Associated Press on Saturday night after the Jets-St. Louis game where Patrick Laine scored 5.  There are no words on this one!  Well, there are but none of them are kind. 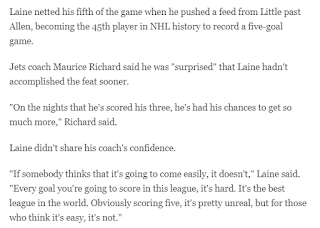 --RIP Mick McGeough.  There is nothing I could say that those who knew him didn't know already.  The man had a unique style, had stories to tell and always wanted info on the Riders.  He left us wayyyyyyyyy too soon and wayyyyyyy too quick.  I got to know Mick a little more during my days in the SJHL when he was put into the league hall of fame.  I knew how good of a man he was before working with him on the Hall-of-Fame ceremony and that only got better during and after.  He was one of a kind.

--That's all I got.  I am and have been in holiday mode and I have no problem with that whatsoever.  Well, I am not headed to a warm weather location, but I'm still OK with being off for a week.  Have a great one!

Alliance Football of America will hurt our league more than people think.

I like the cap on coaches and camps.
Now Jones the GM will have to do some scouting instead of running those ridiculous camps up and down the American east coast all winter long.
Maybe he should have a look west of the Mississippi too.

Field conditions were the story of the day, but that is what you get when you play football outside in late November. Were the field conditions great last year?

The idiots that want the season moved up a month have no clue what problems that will cause.

It is called Canadian football and it is why we love it!


If the offer is right, I think you saw Bo Levi walk off a CFL field for the last time. It means Reilly is the only real quarterback that the CFL has. Add that to the list of problems the CFL has going into the off-season. What a star-studded group at the game's most important position!


The Trevor Harris I knew would show up showed up. Please tell me the Riders have zero interest in bringing this guy in.

Do you not think those camps are used for scouting? DUHHHH!
Do you think Jones is the only one that holds these camps? Again DUHHHHHH!


TSN doesn't want the season moved up by a great deal. They know they will get clobbered by the Stanley Cup playoffs. Ambrosie;s comments on this went away until this week because of that.

May not be popular in Sask, but the CFL is more than the Riders and what their fans want.

Typing this from Edmonton airport.

Just a fantastic weekend. Edmonton did a great job.

The field was an issue, but both teams had to play on it. Calgary made the plays when it mattered plain and simple. Why didn't their punter kick it OOB?

I didn't even mind the halftime singer, but I have never heard one of her songs and will likely never hear another.

Regina has quite a task in front of it if it is going to pass this.


How many times is the CFL going to look bad by playing its marquee game on a bad field? You can't and frankly don't want to go into Montreal, Vancouver and Toronto where the game will be ignored, but is it too much to ask for a title game to be played where weather/field conditions isn't an issue.

Why didn't the CFL cover the field? Why were the logos so frickin big? There has always been a problem with the field at Commonwealth. In the end, the team that was supposed to win did, but it takes away from what could have been so much better.

Maybe the so called lack of quality quarterbacks in the CFL is in fact a lack of quality OCs. You know, the kind that try to mold each and every potential QB into your classic 'stand in the pocket NFL type QB'.
Maybe an OC that would customize his game-plan to suite each QB individually would be more beneficial.
It's a different sport but it makes me think of the 'experts' in the NHL that criticized Dominic Hasek for not being a stand-up goalie. It took them 5 years before they realized they couldn't beat him and they'd better change their ways.
It's the OCs that have to change in the CFL. There's been all kinds of QB talent come North. Kids that won all their lives and never got a chance in the CFL because their style didn't suit an OC that was too egotistical to change.


Those blue blazers were great! Bring em back!


I'm not subscribing to what SWC is throwing down. I will say though SWC has some great hallucenogenics in his possession.