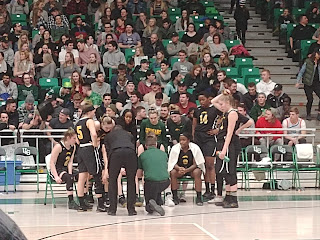 The University of Regina's women's basketball team settled for Canada West silver after a 53-49 loss to the Saskatchewan Huskies on Friday night at the Physical Activity Complex on the U of S campus.

Both teams will move on to next weekend's U SPORTS Women's Final 8, which Ryerson will host starting next Thursday in Toronto.

"I said before the game that whoever won the rebounding battle would likely win the game, and unfortunately that was true," Cougars head coach Dave Taylor said. "I thought we did a good job battling some adversity and through a rough start, but we just couldn't get enough rebounds when we needed them."

The Cougars had a chance to tie it up with under 20 seconds to go, but a runner by Michaela Kleisinger in the lane didn't fall. Saskatchewan's Summer Masikewich grabbed the rebound, was fouled, and hit a pair of free throws to seal the win for the Huskies.

Sabine Dukate and Masikewich combined for 41 of Saskatchewan's 53 points. Dukate had 23, while Masikewich had 18 points and 14 boards as she helped the Huskies to a 45-33 rebounding advantage.

Kleisinger led Regina with nine points, while Angela Bongomin scored eight including a huge three-point play in the final minute that brought the Cougars to within two points. Kyanna Giles added seven points for the U of R, but suffered an injury late in the third quarter and didn't return.

Macaela Crone, Carolina Goncalves, and Christina McCusker all added six points for the Cougars, who had won 12 consecutive games heading into Friday.

The two teams will now await Sunday's announcement of the seeding for the U SPORTS Women's Final 8. Regina and Saskatchewan will represent Canada West at the tournament, McMaster and Ottawa will join host Ryerson from the OUA, the RSEQ bid will go to either Concordia or Laval, and the AUS and wildcard berths will both be decided on Sunday.

NOTES: Friday's game marked the fourth consecutive season that Regina and Saskatchewan have faced each other in the Canada West championship game ... the home team has won all four of those contests, with Saskatchewan also winning in 2016 and 2017 in Saskatoon and the Cougars replying last year in Regina ... Regina has advanced to the conference championship game in 13 of its 18 years as a member of Canada West, winning in 2004, 2013, and 2018.

They'll promptly be eliminated in the 1st round as usual.