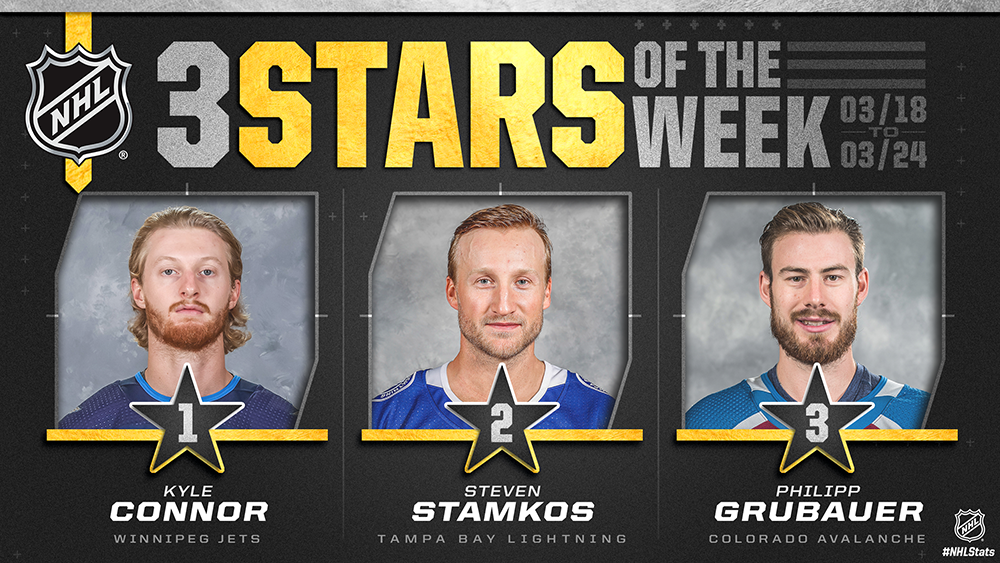 Connor paced the NHL with 5-3—8 in four games to help the Central Division-leading Jets (45-26-4, 94 points) pick up three wins and clinch their second consecutive playoff berth. Connor registered 1-1—2 in each of his first two outings, a 3-2 victory against the Los Angeles Kings March 18 and a 3-0 triumph over the Anaheim Ducks March 20. After being held off the scoresheet in a 5-0 loss to the Vegas Golden Knights March 21, Connor (3-1—4) bounced back with his first career hat trick – as well as his third career four-point performance – in a 5-0 win against the Nashville Predators March 23. In doing so, the 22-year-old Shelby Township, Mich., native – who sits third on Winnipeg in scoring – reached the 30-goal milestone for the second straight season and also hit the 60-point mark for the first time in his three NHL campaigns (32‑29—61 in 75 GP).

Stamkos ranked second in the League with 4-4—8 in four contests as the Lightning (58‑14-4, 120 points) also earned three victories to secure their first Presidents’ Trophy in franchise history. Stamkos opened the week by becoming Tampa Bay’s all-time leading goal scorer, potting his 384th career goal in a 4-1 win over the Arizona Coyotes March 18 to surpass Vincent Lecavalier for the most in team history. Stamkos then recorded 1-2—3 in each of his next two games, a 5-4 overtime victory against the Washington Capitals March 20 and a 6-3 triumph over the Carolina Hurricanes March 21. He added one goal in a 4-3 loss to the St. Louis Blues March 23. The 29-year-old Markham, Ont., native places sixth in the NHL with 39 goals and 10th with 89 points in 76 total outings this season (39-50—89).

Grubauer topped the NHL with 149 saves (on 155 SA), compiling a 3-0-1 record, 1.49 goals-against average and .961 save percentage to lift the Avalanche (34-29-13, 81 points) into the final Wild Card spot in the Western Conference. Grubauer yielded one goal in each of his first two starts, making 36 saves in a 3-1 victory against the Minnesota Wild March 19 and 44 stops in a 3-1 triumph over the Dallas Stars March 21. He then split a home-and-home series against the Chicago Blackhawks, turning aside 29 attempts in a 4-2 win March 23 and making 40 saves in a 2-1 overtime loss March 24. The 27-year-old Rosenheim, Germany, native has appeared in 33 total games this season, matching a career high with 15 wins to go along with a 2.71 goals-against average, .914 save percentage and three shutouts.
at 3/25/2019