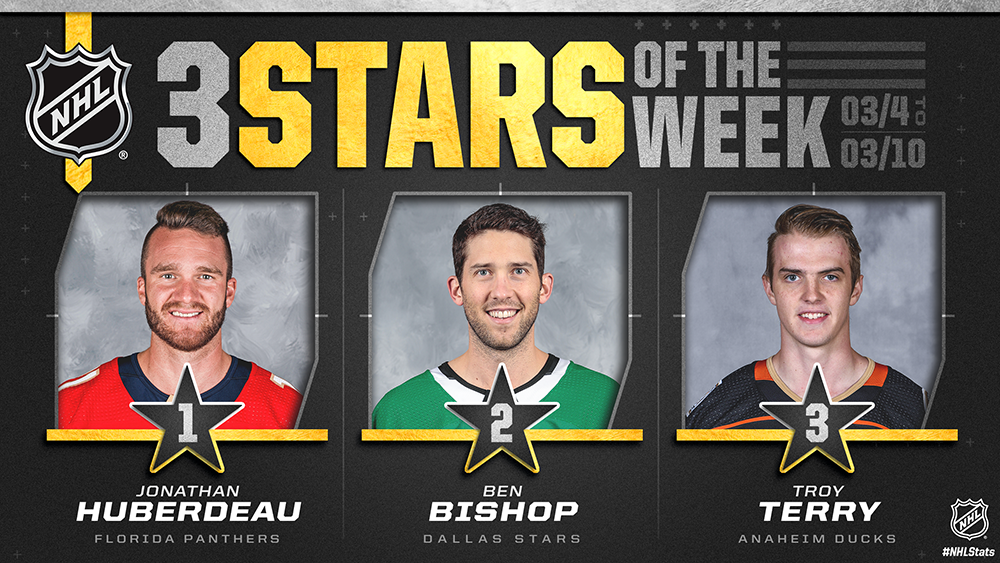 FIRST STAR – JONATHAN HUBERDEAU, LW, FLORIDA PANTHERS
Huberdeau led the NHL with 4-5—9 and a +6 rating in four games to power the Panthers (30-27-12, 72 points) to a 2-1-1 week and within seven points of the final playoff spot in the Eastern Conference. After being held off the scoresheet in a 3-2 overtime loss to the Pittsburgh Penguins March 5, Huberdeau (2-1—3) factored on all three Florida goals in a 4-3 defeat versus the Boston Bruins March 7. He then posted 1-3—4, his fourth career four-point performance and second of the season (also Feb. 28 at VGK: 1-3—4), as well as a career-best +5 rating in 6-2 victory against the Minnesota Wild March 8. Huberdeau added 1-1—2 in a 6-1 win over the Detroit Red Wings March 10. The 25-year-old Saint-Jerome, Que., native and 2012-13 Calder Memorial Trophy winner ranks second on the Panthers with 22-52—74 through 69 outings this season, already establishing personal highs for assists and points.

SECOND STAR – BEN BISHOP, G, DALLAS STARS
Bishop stopped all 59 shots he faced over two appearances to help the Stars (35-28-5, 75 points) earn two wins and maintain the first Wild Card position in the Western Conference. Bishop, who registered consecutive shutouts for the first time in his NHL career (362 GP), made 28 saves in a 1-0 triumph over the New York Rangers March 5 and 31 stops in a 4-0 victory against the Colorado Avalanche March 7. In doing so, he became the first Dallas goaltender to post shutouts in consecutive team games since Kari Lehtonen from March 10-13, 2012. The 32-year-old Denver native has compiled a 22-14-2 record in 39 total contests this season, ranking second in the League in both goals-against average (2.13) and save percentage (.930) while sharing third place in shutouts (5).

THIRD STAR – TROY TERRY, RW, ANAHEIM DUCKS
Terry collected 2-5—7 in four outings to lift the Ducks (27-34-9, 63 points) to a pair of wins. He scored once in a 3-1 victory against the Arizona Coyotes March 5. Terry then recorded consecutive three-point games, notching three assists in a 5-4 loss to the St. Louis Blues March 6 and 1-2—3 in an 8-2 triumph over the Montreal Canadiens March 8. He became the first rookie in Anaheim history to register consecutive three-point performances as well as the first rookie to achieve that feat for any team since Mathew Barzal from Jan. 13-15, 2018 (3-5—8 w/ NYI). Terry finished the week with one shot on goal and 17:42 of ice time in a 3-2 loss to the Los Angeles Kings March 10. The 21-year-old Denver native, who played in two games in 2017-18, has totaled 4-6—10 through 23 contests this season.