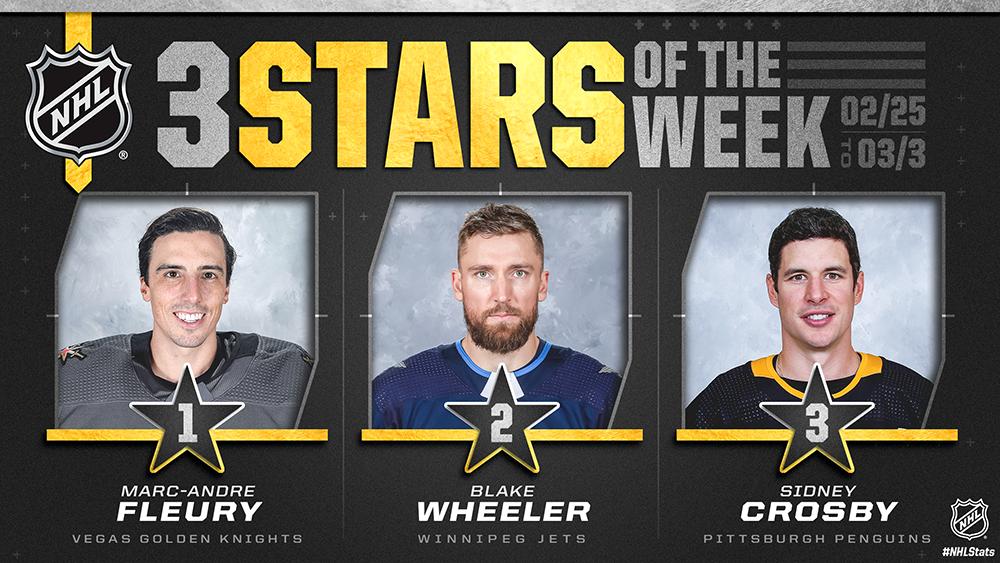 Fleury went 3-0-0 with a 0.33 goals-against average, .987 save percentage and two shutouts as the Golden Knights (36-26-5, 77 points) improved their overall winning streak to four contests to sit third in the Pacific Division. Fleury began the week by making 23 saves in a 4-1 victory over the Dallas Stars Feb. 26. He then posted back-to-back shutouts stopping 34 shots in a 3-0 win over the Anaheim Ducks on March 1 and making 19 saves in a 3-0 victory over the Vancouver Canucks March 3. The 34-year-old native of Sorel, Que., leads all NHL goaltenders in wins (32) and shutouts (8) this season. He became the fifth goaltender in NHL history to record nine or more campaigns with at least 30 wins and his eight shutouts are two shy of his career high of 10 set in 2014-15.

Wheeler finished the week tied for first among scorers with 5-3—8 in three games as the Central Division-leading Jets (39-22-4, 82 points) won two of three contests. Wheeler opened the week by notching one assist in a 3-2 loss to the Minnesota Wild Feb. 26. On March 1 he recorded one goal and two assists in a 5-3 win over the Nashville Predators. Wheeler closed out the week with a four-goal effort in a 5-2 victory over the Columbus Blue Jackets on March 3, the second four-goal game by a player last week (also Arizona’s Brad Richardson on Feb. 28). The 32-year-old native of Plymouth, Minn., leads all Jets skaters with 17-63—80 in 65 games this season. Only Tampa Bay’s Nikita Kucherov (75) has recorded more assists in 2018-19.

Crosby tied for the League lead in scoring last week with eight points (3-5—8 in 3 GP) as the Penguins (34-22-9, 77 points) gained five of a possible six points to hold the first Wild Card position in the Eastern Conference. Crosby opened the week by notching one goal and one assist in a 5-2 victory over the Columbus Blue Jackets on Feb. 26. On March 1, he recorded one goal and one assist in a 4-3 overtime loss to the Buffalo Sabres. Crosby finished the week with one goal and three assists in a 5-1 victory over the Montreal Canadiens on March 2. In doing so, Crosby passed Alex Ovechkin to move into 48th on the NHL’s all-time points list. The 31-year-old native of Cole Harbour, N.S., ranks tied for fourth in the NHL with 29-54—83 in 62 games this season.