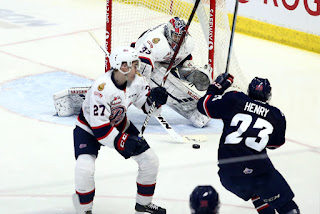 Lethbridge Hurricanes forward Nick Henry works towards the net during a game against his former team at the Brandt Centre on March 2, 2019.  Photo: Courtesy Keith Hershmiller


The Colorado Avalanche Hockey Club have  announced the team has signed forward Nick Henry to a three-year, entry-level contract through the 2021-22 season.

Henry, 19, has split the 2018-19 season between the Western Hockey League's Regina Pats and Lethbridge Hurricanes. He recorded 40 points (15g, 25a) in 25 games for the Pats before being traded to Lethbridge, where he's tallied 43 points (9g, 34a) in 37 contests for the Hurricanes. Henry's combined 83 points (24g, 59a) this season are tied for seventh in the league, and he ranks third in the WHL in assists.

The Portage la Prairie, Manitoba, native has totaled 193 points (73g, 120a) in 187 career WHL games for Lethbridge and Regina, where he spent his first two full campaigns in the league and served as an alternate captain this season prior to the trade.

Colorado's fourth-round selection (94th overall) of the 2017 NHL Draft, Henry registered 81 points (35g, 46a) in 72 games in his rookie campaign with the Pats in 2016-17, ranking second among league rookies in all three statistical categories. The 5-foot-11, 186-pound right wing finished with a +32 plus-minus rating, which was tops among all first-year players.

Henry has 16 points (7g, 9a) in 29 career WHL postseason appearances and helped the Pats advance to the finals of the WHL playoffs in 2017. In 2018, he notched seven points (5g, 2a) in five games of the Memorial Cup, helping Regina advance to the final.


Great kid. Deserves the opportunity. Glad to see him have a big game yesterday.