--Are the Oakland Raiders and Green Bay Packers coming to Mosaic Stadium?  That is what people are talking about since Sportscage CFL insider and 3DownNation.com's Justin Dunk reported it Monday.  I don't see it happening.

Who is going to pay for the revamping of the field? Does Mosaic Stadium have holes for the US goalposts to be put in? From what I hear, the answer is no.   I can't think the CFL would really be happy with this either.   Unless it is Week 3 of the NFL pre-season when the starters play a majority of the game, this will be a glorified CFL game with no Canadians being mandated.   Don't get me wrong, I would love to see it and if it happens. I will be there.  However, if you think you are going to see Aaron Rodgers, Devante Adams, Clay Matthews, Derek Carr and, and, and ....well you get my point, you will be sadly mistaken.   What I do know is there is a major concert coming to Mosaic in August.  The sooner that gets announced (although I think many of us already know who it is), then this story will probably go away.

--Some that I speak to think the BC Lions are now the class of the West now that Mike Reilly is there.  This just in.  The Calgary Stampeders are still the class of the West.   Much like the New England Patriots, everyone hates them and wants to write them off, but they still have Bo Levi Mitchell and others that have kept them atop the CFL ladder for years.  They aren't going anywhere anytime soon.  Yes, that bothers me as well, but like the Patriots. you can respect them, but you don' t have to like them and in Rider Nation, we don't like them.

--If and it's a big if because I think he will find CFL employment and could be back in Saskatchewan, but if Weston Dressler calls it a career will he do what Tristan Jackson did and retire as a Rider.  I would hope so.  I just wonder what the relationship between Dressler and the organization is after his release.   Then again Chris Jones is no longer here,

--The complaints have started about the NHL playoffs. With three of the NHL's top four teams residing in the Atlantic Conference (Tampa, Boston, Toronto), some are wondering why the NHL simply wouldn't go back to the 1 vs 8 format.  The NHL wanted the format they have to spark division rivalries.  I'm OK with either if the truth be told.  In the second round, you are still going to likely get a matchup that will see some two of the top teams facing one another if they aren' t victim to a first round upset.  A lot of this posturing comes from Toronto it would seem.  God forbid if their beloved Leafs had a tougher time in getting to a place where they haven't been for a number of years.

--Who is the second best team in the NHL right now?

--Its been a fine showing for Kirk Muyres in Brandon at the Brier.  Some will say he's beaten the teams he should have beat and has lost to the ones he should have.  That's a fair statement, but Muyres has played these teams before and has been successful.  The Brier is a different animal.  This isn't a cashspiel in Medicine Hat.  Some teams are used to the bright lights and others may not be.  If that is what has happened to Team Saskatchewan this year, they will be better for it next if they get back.  The rivalry that Muyres and Matt Dunstone will have over the next few years will be one of the best we have seen in Saskatchewan men's curling in a long time.  That might be the best news of all.  By the way, I fully expect Brad Gushue to be hoisting the trophy again Sunday night.

--Down 13 at the half and without their best player, it looked grim for the U of R Cougar womens basketball team at the nationals in Toronto.  They found a way to make a game of it though. Sadly for Dave Taylor's group, another great look at the basket didn't result in what would have been a game-tying basket at the end as Carolina Gonsalves couldn't make the shot and Regina lost 65-63 in a game that had a similar ending to the Canada West final last weekend in Saskatoon when Michaela Kleisinger's shot wouldn't fall at the key time giving the Huskies the win.  Another appearance at the nationsls is nothing to sneeze at, but one year it would be nice to see that team go all the way. 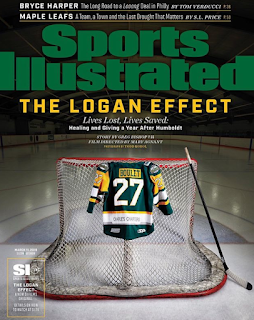 --If you haven't seen the documentary on former Humboldt Bronco Logan Boulet and how being an organ donor saved six lives, go watch it.  It is 40 minutes that will be well spent.  Greg Bishop (who I spoke with on the Sportscage Thursday) and crew did an amazing job both with the documentary and the article

This is why I would favour a 1-8 playoff matchup instead of the current. 3 of the top 5 teams are in one division. In a way, it is like the CFL argument.

1. Weston still has some tread on the tire. I think he finds work with someone this year. It would be great to see him retire a Rider, but bridges were burned.

2. The Boulay documentary is outstanding. I have done it and did it years ago, but allowing for your organs to be donated for someone else is a very noble gesture. Sign the card and say its OK.

Weston Dressler has a quality that few have. Last year Winnipeg never won a game when he wasn't dressed, but put him in and they were a different team. I hate it when athletes go too long and I suspect Dressler trying to play this year would be just that. But I'd like to see WD7 sign a one day contract with the Riders and retire.


Unless that much rumoured concert has fallen through (and it hasn't at last word), this game won't be happening

2nd best team in the NHL right now is the Washington Capitals.

RIP to Pats and Broncos.