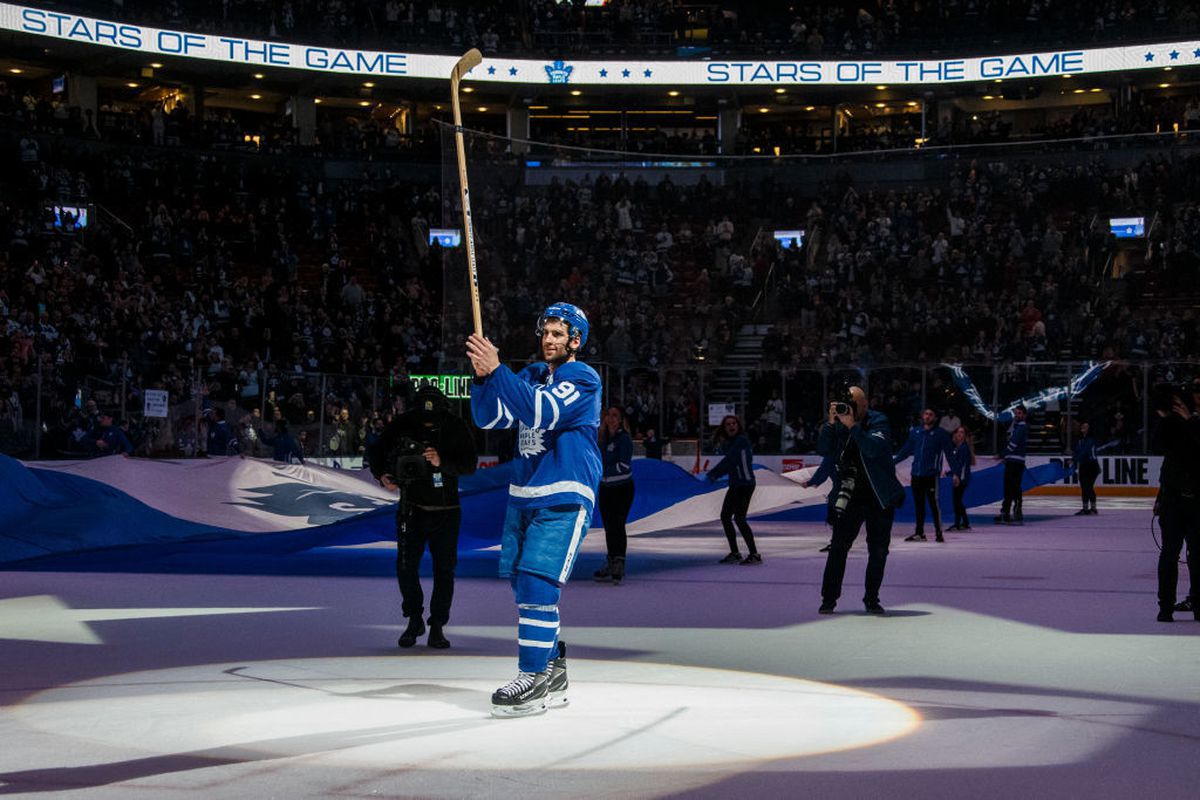 --John Tavares received a standing ovation from those at Scotiabank Place on Saturday night.  The Toronto media gushed all over it as if it was a move that united the country.  It was a move that made me and some others just barf.

Yes, Tavares was roundly booed in his first game back in Uniondale after he bolted the Islanders for the Leafs in free agency.  Islander fans have every right to do so much like Rider fans had the right to boo Henry Burris every time he walked onto Taylor Field.  Tavares is  a big boy. I think he can take it. His skin isn't that thin is it?

However, Toronto had to show their love for Tavares Saturday while belitting the Islander fan base for what they had done.  Where was this on opening night when Tavares was introduced to the crowd?   Did they have to wait until the 3/4 mark of the season to show "Johnny Toronto" as Joe Bowen called him how much he was revered amongst their fan base?   What a laugh!  When is the standing ovation coming for Jake Gardiner?   I said last week I would like to see a Leafs-Islanders first round playoff matchup.  Can I double down on that?

--Still with the Toronto media and laughs. The Toronto media is obsessed with Connor McDavid wanting to tell the Oilers to move him.  They love the fact that McDavid is once again going to miss the playoffs and that this will be three of four years he has done so.

Do we remember when Mario Lemieux didn't make the playoffs in four of his first five years in the league?  How did Lemieux's career turn out?  Oh yeah!

The Toronto media should stick to making sure John Tavares goes to bed a happy boy and isn't picked on anymore by those nasty, nasty Islander fans!  By the way, what do you think happens if and when one of the Leafs top players leaves via free agency.  I am guessing he won't get a key to the city in his first game back in Toronto.  Then the narrative will be how the Toronto hockey fan "deservedly" stuck it to said player for deserting them.    Wait for it!

--Rider fans continue to feel uneasy about their team.  I understand that.  They feel as if the other teams are passing them by.  I see what has gone on in the off-season and I understand that.  Jeremy O'Day tried to get Bo Levi Mitchell in Saskatchewan colours and when he couldn't do that, he reached out and brought Zach Collaros back seeing Mike Reilly and Trevor Harris went elsewhere.  What else was he to do?  I still say O'Day has something up his sleeve when it comes to quarterback that we will see before camp.

--Can Duron Carter last a season in BC? I'd love to say yes, but I can't.  With Mike Reilly throwing him the ball, Carter could have his best season ever if he keeps his head on straight and doesn't alienate himself to teammates.  That's easier  said than done.

--Friday night at the PAC in Saskatoon watching the Cougars and Huskies battle it out for the Canada West title was tremendous and a little revealing as well.  The sad truth of the matter is the U of R should be embarassed after what went down on Friday---at least the student body should be.

The U of S student body came out to support their club which is something the U of R doesn't do for whatever reason.   The area behind the Cougars bench was a madhouse. It forced Dave Taylor to bring his team onto the court during timeouts so he could get his message across.  Yet when the Cougars are home, there is no or very little activity behind the visitors bench when a basketball game is being played men or women.  Why is that?

There were members of the U of S football team, the soccer team and the wrestling team there.  How many Cougar athletes are there to show support for the basketball team at their playoff games? How many U of R students are there? Yes, some athletes and students do come but it pales in comparison to what the Huskies athletic roster were doing ---at least on this night it did. I am guessing many more were at the new Merlis Belsher arena cheering the men's hockey  team onto a win over Alberta.  I am also told this was not a one-time thing.

If the Huskies can get a solid homecourt advantage because of loud fans, then Regina should be able to as well shouldn't they?  One would think so!  Its time for the student population in Cougarville to bring their game up a notch or two starting next year. Be proud!

As for the game itself, it was a grind-it out game that the Huskies prevailed in despite the fact I thought Regina played better.  Regina just couldn't hit shots and get key rebounds.  The Huskies made stupid mistake after stupid mistake after stupid mistake but they did enough to win.  If Michaela Kleisinger's short runner with about 12 seconds goes in, we are probably going to overtime and who knows what happens then.  Can these two teams meet again at the nationals as they have the last three years? The two teams are on different sides of the bracket so if we get a rematch, it will be in the title game.  I'd be all for that!  The fact Regina lost Kyanna Giles to what looked like a season-ending knee injury makes it very difficult though.

It was a lot of fun sitting with the parents and supporters of the team watching Dave's squad do their thing while rooting them on albeit unsuccessfully. That chance doesn't come around very often. It was a lot of fun.  Apologies to former Cougar Kehlsie Crone whose sister plays on this year's team.  She was right in front of me and in firing range with yells of encouragement.  Then again, she was screaming too as we looked for at least one "3 in the key" call that didn't come.  Does anyone call that anymore?

--The Pats did it right Saturday.  Midway through the first period, they saluted both Jake Leschyshyn and Nick Henry with a video and yes, both admitted to coming close to tearing up.   Who's kidding who, they probably did.  Leschyshyn and Henry may not have gotten the ink that guys like Adam Brooks, Sam Steel and Connor Hobbs got over the good years, but they were just as instrumental.  Congrats to Nick for signing a deal with the Avalanche on the weekend.  The trade that sent those two to Lethbridge in which numerous assets came back could result in players that get the Pats back to the level they want to be at.

--If you haven't seen the video where Carey Price gives a fan of his a huge hug and some autographed sticks, go find it and go find the story behind it.  You might also then want to dry your eyes.  What a great move by the Habs goalie.

--Yankees outfielder Aaron Judge told reporters Sunday his team could break the records for homeruns hit in a season breaking last year's mark of 267.  That number broke a record that had stood for two decades. .  He may be right.  That New York lineup is a modern day Murderers Row again with Judge, Giancarlo Stanton and Miguel Andujar leading the way.  Boston might still be the class of the AL East, but the Yankees have narrowed the gap and that is bad news for Tampa, the Jays and Baltimore who all should likely be well under 500.

--Say what you will about Bryce Harper, but his decision not to wear 34 in Philadelphia because that was Roy Halladay's number is a classy move. He gets it!

--If the NBA season ended today, the Detroit Pistons would meet the Toronto Raptors in the first round. Dwane Casey would have a chance to hand his old team another early playoff exit.  How delicious would that storyline be!  Detroit beat Toronto in both games this year too.  It just gets better!

--Midget Wrestling is coming to the Press Box in May.  Need I say more!

Burris embraced it when it happened here.

Toronto sports fans are a joke!


Leschyshyn and Henry were pawns. In this day of junior hockey where good players on bad teams are shuffled away it makes it tough for the fan-base.

We could become fans of Sam Steel and Josh Mahura because we knew they weren't going anywhere.

All Regina hockey fans knew these two players were going to be traded but when. As a result, we have faces that no one knows about. The Pats need to introduce us to these players and let us know who they are all about in the off-season. They do some nice things on the website, but public interaction is what is needed. Saturday's post-game skate was a start.

I loved your rant about Tavaros and Torontonians in general. I also hope the Isles kick the Laughs asses in the playoffs.

Wait till the Leafs go back to Uniondale in April!


Regina is a city well-known for sitting on its hands. Why should I be surprised that those going to Cougar games don't make it uncomfortable for the visiting team.

Have the Sabres made the playoffs with Eichel?