Broncos Bus Crash Book To Be Turned Into A Movie 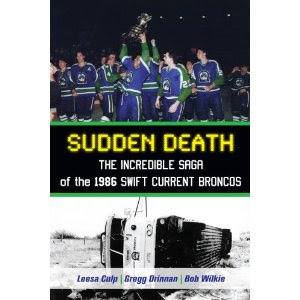 January 29, 2013 (Regina, SK) Trilight Entertainment Inc. is pleased to announce it has
optioned Sudden Death: The Incredible Saga of the 1986 Swift Current Broncos (Dundurn,
2012) and will produce a live-action feature film adaptation of the book. Award-winning
Saskatchewan writer/director Rob King (Corner Gas, Hungry Hills) is on board to pen the
adaptation.

Described by the Globe and Mail on February 2, 2008 as “The Most Amazing Hockey Story
Ever”, the incredible-but-true saga of the 1986 Swift Current Broncos is brought to life in
Sudden Death. After a tragic game-day bus accident left four of its star players dead, the
Broncos made headlines across Canada when the team rebounded and won the prestigious
CHL Memorial Cup only two years later.

Sudden Death is a spellbinding collaboration between three individuals with a unique
connection to the unbelievable story: Bronco’s defenceman Bob Wilkie, WHL historian
Gregg Drinnan, and Leesa Culp, the lone female witness to the infamous crash.

“We are extremely happy that we have been able to secure the option for this book,” states
Shayne Putzlocher of Trilight Entertainment Inc. “The story of these players, and the
community of Swift Current, overcoming such a huge adversity has always been
overshadowed by other very publicized events. It is time to have their story told.”

“It’s just a shame that due to recent decisions made by the Saskatchewan government and its
continuing promotion of instability in the Saskatchewan film industry, we have to look at
other jurisdictions in Canada to shoot this amazing story, which took place in none other than
the Premier’s hometown,” says Trilight Entertainment Inc.’s Holly Baird.

“Sudden Death is a remarkable story of loss and survival that resonates just as strongly now
as it did twenty-seven years ago,” says Dundurn publisher Kirk Howard. “To have this
remarkable story turned into a movie will not only introduce it to a new audience, it will
ensure the legacy of the Swift Current Broncos.”
at 1/29/2013