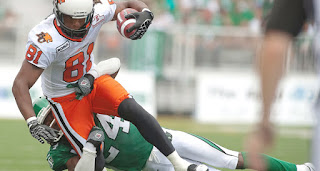 The B.C. Lions have given all-star receiver Geroy Simon permission to check out the CFL trade market.

The 37-year-old slotback has spent 12 of his 14 CFL seasons with B.C. and last year surpassed Milt Stegall as the league leader in all-time receiving yards.

But hamstring injuries forced Simon to miss five games, limiting him to 54 catches for 700 yards and two TDs in 2012.

It marked the first time in 10 seasons that Simon had not cracked the 1,000-yard receiving plateau.
The Lions have been busy this off-season, signing quarterback Travis Lulay to a contract extension reportedly worth $450,000 annually while also releasing veteran cornerback Byron Parker and slotback Arland Bruce III.

Much like Bruce, Geroy's best days are behind him. If he comes here, it better be at a cheap price.

The people on Taman for not signing Bruce will have more ammo in their backpocket if he doesn't sign Geroy.

Pederson says Geroy is coming. What do you know about it? Spill the beans Scruffy!