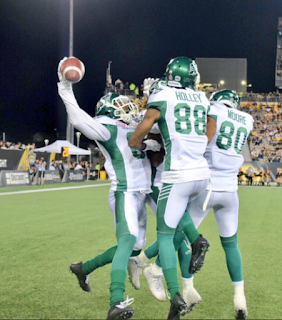 The 25-year-old got the official nod as the starter late Friday afternoon after Head Coach/General Manager Chris Jones had said all week that while Glenn's hand was healing from an injury suffered at the Banjo Bowl that he was day-to-day.

Devon Bailey, Bakari Grant, and Naaman Roosevelt scored for the Riders, who lost their top receiver Duron Carter early in the game to an ankle injury. Carter was one of several Riders who went down to injury with others like Otha Foster, Marcus Thigpen,  Mike Edem and Brendon Labatte going down during the night.

Saskatchewan improves to 6-5 and temporarily ties B.C. for fourth in the CFL West and a possible playoff crossover spot. The Riders also hold a game in hand.

Hamilton falls to 2-9, last in the East Division. The Ticats had five turnovers, totalling 17 points.

Hamilton had one last drive with 31 seconds left and had first-and-goal on the one with five seconds left thanks to a pass interference call against Saskatchewan. But the final play was a pass that went incomplete in the endzone and Saskatchewan held on.

Whose call was it to bring in a stone cold Vernon Adams and kill a nice drive?


What a gutty effort by Labatte. That's Saskatchewan Tough!!


Quality win, ugly win with a duct tape D at the end. How many of those injuries are serious? If its nicks, OK, but with Calgary here, it could be ugly next weekend if we have to put the 12 that ended the game back on the field to start next week.

PS, This team rebuild definitely not happening under the last clueless regime.

Marc Trestman in Toronto is going to prove you don't have to blow up a team to rebuild it in the CFL. Last year was a total waste by Jones.

Keep living in the past bub with the ways of the past rider loser regime. Mr.Jones and his Saskatchewan Roughriders Football management team on target for long term organization success.
PS, What Toronto does is on Gm Jim Popp, the man running the Argonaut show. Marc Trestman just one of his puppets on a string.