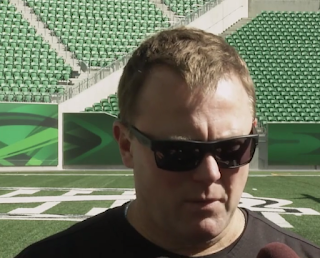 Saskatchewan Roughriders Head Coach and General Manager Chris Jones had good news on Wednesday when it comes to the health of many players who were injured in Friday's 27-19 win in Hamilton.

Jones says they are not out of the woods yet on some players that were nicked up, but he feels the biggest majority will be ready.

Jones says they were fortunate to have a couple of extra days to prepare for the game so it helps those who were part of the walking wounded like Brendon Labatte, Otha Foster and Duron Carter to likely suit up against the Calgary Stampeders when they visit Mosaic Stadium Sunday at 2.

Meanwhile, two new players were at camp on Wednesday as defensive backs Elie Bouka and Marc Olivier-Brouillette were on the field practicing.

Brouillette had retired before the season started to concentrate on a career in law, but he said he got the itch to play again after being on the field before a Toront0-Montreal game earlier this month and after making some calls and making sure he would not be jeopardizing his law career and his family plans, he decided to make a return.

After missing the game in Hamilton, Kevin Glenn said he would re-assume his role as starting quarterback. Glenn says he made the decision Friday not to suit up because of a hand injury that he said didn't quite give him the zip he wanted to have on the football when making the passes that needed to be made to be successful.


Guys might not be as hurt as bad as they appeared to be, but I can't see them even coming close to Calgary.