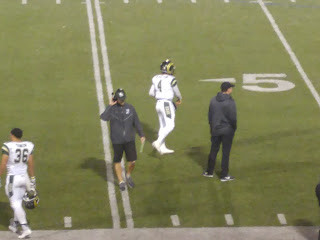 The University of Regina never trailed and the offence clicked all night long in a 50-40 road win over the Saskatchewan Huskies on Friday night at Griffiths Stadium, helping the Rams improve to 3-2 and move into second place in the Canada West standings.

But while the offence put up some impressive numbers, it was a defensive play late in the ball game that finally put the home side away.

With the Huskies down by 10 and just over two minutes left to go, Rams second-year defensive lineman Nicholas Dheilly not only stripped the ball from Saskatchewan quarterback Kyle Siemens, but recovered the fumble. Two plays later, Atlee Simon was in the end zone to make it a three-possession game and end any hopes of a late Saskatchewan comeback.

“We had some outstanding performances tonight by, really, a whole bunch of guys,” Rams head coach Steve Bryce said. “But we got superior performances by Noah (Picton), Atlee (Simon), and (Ryan) Schienbein. They really took control of the game, and the offensive line blocked incredibly well tonight and opened up a ton of holes for Atlee. And Nicholas Dheilly, he’s not 100% yet so to come up with that crucial sack for us late was such a massive play.”

Noah Picton and Atlee Simon drove the offence for the Rams. Picton completed 33 of his 44 pass attempts for 384 yards and joined Darryl Leason and Teale Orban as the only Rams players ever to throw five touchdown passes in a single U SPORTS game. Picton also ran one in himself in the third quarter for his first touchdown run of the season.

Simon had a fantastic night in the win, rushing 18 times for 163 yards as he was a beneficiary of the blocking of Bryan Robinson, Thomas Stanton, Roe Borgmann, Michele Vecchio, and Theren Churchill. Simon, who also caught seven passes for 72 yards to finish with a game-high 235 all-purpose yards, had one touchdown run and one touchdown catch and is now tied with Jason Clermont for the University of Regina’s all-time lead with 26 career majors.

Ryan Schienbein was Picton’s top receiver, catching 10 balls for 125 yards including a couple of the highlight-reel variety. Schienbein and Mitchell Picton both had a pair of touchdown catches, while Mitch Thompson returned to the lineup and had seven catches for 69 yards.

Nick Cross led the Rams defence in tackles, getting credit for five solo and four assisted.

The loss overshadowed a fine effort by Saskatchewan’s Siemens, who completed 37 of his 57 pass attempts for 489 yards while matching Picton with five touchdown passes. Mitch Hillis had seven catches for 99 yards and hauled in three touchdowns, while Chad Braun and Samuel Baker also had touchdown receptions for the Huskies. Brett Boechler led the U of S defence with 10 solo tackles and four assisted tackles.

Thanks to Calgary’s road win over UBC on Friday, the Rams move into second place in the conference standings. The Rams and the Thunderbirds both have 3-2 records, but Regina’s Week 1 win over UBC gives the Rams the tiebreaker – for now, as those two teams will close out the Canada West schedule against each other in Vancouver.

The Rams will now enjoy the Canada West bye week before returning to action against Alberta on Saturday, Oct. 14 in Edmonton.

NOTES: Noah Picton moved into second place in Canada West history in both passing yards and completions, and is now over 9000 passing yards for his career ... Mitchell Picton’s two touchdown catches give him 21 for his career, tying him with Chad Goldie for the University of Regina’s all-time lead ... Friday’s game was the highest-scoring contest in the all-time series between Regina and Saskatchewan, just edging the old mark of 89 set during the Rams’ 58-31 win over the Huskies in the 2001 Canada West semifinals.

nothing feels as good as beating Saskatoon fellas


Great night for the Rams. When you beat the Huskies by one or 51, it's a great night!

When one is driving home from Weyburn listening to you and Addy on the CKRM app start discussing what happened to the Compete Street sign, you make me just about go in the ditch laughing.