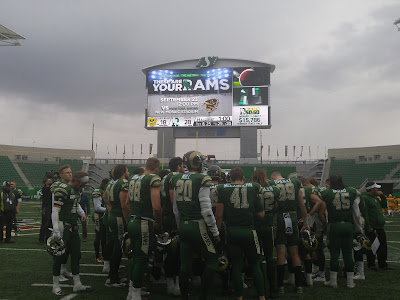 Mitch Picton caught two first-half touchdown passes as the No. 6-ranked University of Regina Rams took a 28-18 victory over the Alberta Golden Bears on Saturday afternoon at Mosaic Stadium.

It was the seventh time in Picton’s career that he’s ended up with multiple touchdown catches, and the fifth-year slotback is now tied with Jason Clermont for second on the school’s all-time list with 19. Picton finished with seven catches for 69 yards, while Kyle Moortgat was the game’s leading receiver with career-high totals of 11 catches and 107 receiving yards.
Rams quarterback Noah Picton completed 30 of his 42 pass attempts for a total of 334 yards as he moves from eighth all the way up to fifth on Canada West’s all-time passing yardage list. Atlee Simon finished with 15 rushes for 85 yards, the longest of which was on a 23-yard jaunt late in the game that eventually resulted in  Sam Varao jumping on the ball in the end zone for his second career touchdown.
The Rams, now 2-1 on the season, will be back home next Saturday when the opposition is the University of Manitoba Bisons.


That was bad football! Real bad!


Someone please tell me why Noah Picton can't play at the next level. The kid can make all the throws that are needed. Nothing against McConkey, but you put him with an offensive co-ordinator or a QB coach who could take his game to another level and he can be a CFL'er. So much fun to watch!