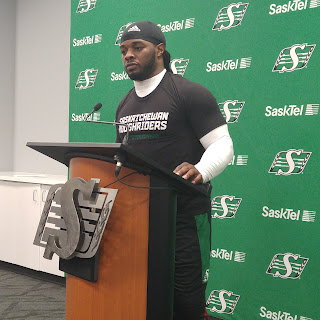 After turning down an opportunity to join the Saskatchewan Roughriders earlier this season, 26 year old running back Trent Richardson has now signed with the team.

The 3rd overall pick in the 2012 draft has not played football since the end of the 2014 season.  During his time with the Cleveland Browns and Indianapolis Colts, the University of Alabama product played 46 games gaining 2,032 yards and 17 touchdowns while making 113 catches for 912 yards and two TD's.

Richardson had many things to say to Regina reporters today as he was grilled for the first time.


When asked about Richardson, Head Coach and General Manager Chris Jones had the following things to say

Jones added REC Naaman Roosevelt won't play in Ottawa Friday as he continues to recover from a huge hit he absorbed Sunday vs Calgary.  Jones said he could be back for the game in Toronto in October 7.
at 9/26/2017

So what! We could have Todd Gurley or Dalvin Cook here and we won't run the ball. GLad to see the Harris kid got a real shot.


If he can play, this is huge.

However, he hasn't played in a long time and he was a huge bust.


I agree with Todd, but I don't think he plays. Sure would like to know what Jones' agenda is on these guys. I don't want the Riders to be the CFL home for washed up NFL guys.