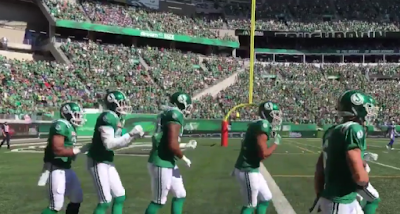 What did I  think this weekend? Here ya go!

1. Are the Saskatchewan Roughriders the best team in the CFL right now?  One could say yes!  In the last three weeks, the Riders have not only beaten three Western Division opponents, but they have disposed of them quite easily.

I expected the green-and-white to win the Labour Day Classic at the new Mosaic and send those Innipegers back to the Manitoba capital without a "W", but I didn't think they were going to blow the doors off of them.  For the third straight week, they completely dominated a Western rival and while it did get interesting down the stretch, the Riders were in control and are now above 500 for the first time since the end of the 2014 season.  Did you see that coming a month ago?

2.  Where do you start with this one?  Kevin Glenn continued to play at a high level throwing for almost 400 yards and three touchdowns. Once again, his main culprits were "The Presidents" as Duron Carter, Naaman Roosevelt and Bakari Grant caught just about everything thrown their way.  They all had 100 plus yard games. When is the last time the Riders had 3 100 yard receivers in a game.

As for Carter, he is starting to make the great catch look normal now. While Glenn continues to dazzle, it starts up front as the o-line is making his life as easy as can be.  The Dan Clark injury that some thought would be bad for this team has turned out to be solid with Brendan Labatte moving to center and Derek Dennis moving to left guard with Bruce Campbell at left tackle. Campbell has been nothing but a force since he moved into the starting lineup.

3. When the Riders beat Hamilton and Toronto, some said they were just Eastern teams so what.  Then they beat BC and some said yeah, but they are a different team at home than they are on the road. Then they won a road game against Edmonton and it was muttered, yeah you beat an Eskimo team with all the injuries. What's the excuse on this one? Winnipeg had won 5 in a row and were the hottest team in the CFL. They weren't an injured lot.  Some think (especially in Manitoba) that they were the best squad in the CFL going into the game.

The bottom line is they have soundly defeated Western rivals by double digits in their last three games.  What we thought were seeing is now staring us right in the eyes. That is the talent that we thought was there is there, and its showing.  While he deflected talk of it in his post-game newser, Chris Jones is right where he said he would be. When he took over, he promised no miracles and said it may take a year and a half to get this team to a point where he is comfortable. At this time, that prediction looks to be very accurate. By the way, where are the Jones haters now?  They are seemingly more silent right now than the Bomber fans who were beaking last week about how good their team is. What will the Banjo Bowl bring?

4. If the Riders were to be successful, they had to stop Andrew Harris. Mission accomplished! He had 29 yards rushing. That was it. I'd have to go back and see if that's a season-low for the Winnipeg running back, but it is safe to say he was shut down.

5. Don't look now, but the Riders have beaten BC in the season series, they have a substantial lead on the Eskimos after their win at Commonwealth and if they can win the Banjo Bowl, they will have beaten Winnipeg two out of three and take that series as well.  Home playoff game? Yeah, I think its too early to start talking about that.

6.  Tweet of the night goes to outgoing Premier Brad Wall.  He sent a tweet to his Manitoba counterpart Brian Pallister asking why he wasn't returning his calls. He then asked if it was because Ed Gainey kept intercepting them.

7. There simply aren't enough superlatives for the statues of Ron Lancaster and George Reed that now sit just outside the northwest corner of the stadium. 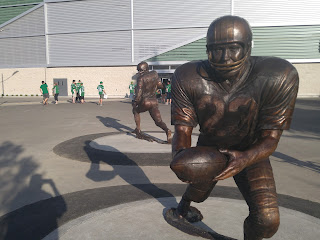 Well done Riders, well done indeed.  I wasn't at the unveiling ceremony, but the emotion George Reed was feeling left many with a teary eye.  I can only imagine what Ronnie would have said. I wish he could see what his team is playing in now. He deserved a solid standing ovation or two from Rider Nation in new Mosaic.  As I heard one fan say on Sunday when walking in, the statue allows us to take a handoff from Ronnie. How true!  How many pictures will be taken with Rider fans doing just that.  Again, hats off to all involved in this.  Who is the next statue going to be of?  I would love to see one of Ridgway kicking that field goal in 1989! There's two more entrances so let's make it happen!


8. Let's go from the Labour Day Classic to the Rams dismantling of UBC Friday night. Like the Riders, the Rams took it to their opponent in the first half as they assumed control early. Noah Picton was Noah Picton and when that happens, the Rams usually win.  What impressed me though was the speed of the defense and the play.

Nick Cross showed everyone why scouts are already drooling over him.  Cross was the first Ram to start a game fresh out of high school since 2008 and he looked like a senior. He was all over the field making plays.  What is he going to be like when it comes time to be drafted? The same could be said for Nick Dheilly.  Bryce McKinnon, Danny Nesbitt along with former Hilltop Cole Benkic were all solid as well in the victory.  The Calgary Dinos are next and that will be a tussle extraordinare.  I will have the call of that game for you on 620 CKRM from McMahon Stadium, and I am very happy to say I will be joined by former Rams receiver Addison Richards on the broadcast.  Addison will join me for all the road games this year as I will bring you those while Michael Ball brings you the home games.  I know he is looking forward to it, and so am I.

9. There is talk the Canadian Olympic team in Pyongchang could have Shane Doan and Jarome Iginla on it. Does that excite you? Will Bill Ranford be in goal? Is Dale Hawerchuk going to play? How about Joe Sakic or Steve Yzerman? I'll pass.

11. Saturday night I visited Escape Manor in the Doubletree. What a great hour! We tried to tackle the mystery of the Wine Cellar and we failed miserably. Apparently, many do. You have to brain working on overdrive to be good at these things as the clock ticks down from 45 minutes.  I highly endorse it and the price is right at 22 dollars a person.

One other question before I go and it's actually a question brought forth by Rider fan, friend and local degenerate Chris Garton.  How can Rider fans go to a game with Winnipeg with a green Dressler jersey on? He's the enemy on this day!  He's right!


That's all I got. Enjoy your holiday Monday. Are the kids ready for school?


One game over 500 and you're proclaiming the Riders as the best team in the CFL. Yeah OK!

He said best team last 3 weeks...tough to argue that one


Did anyone see the a-holes from Winnipeg sitting in Pil Country try to rip Gainer's head off as he went around after a TD? Those clowns are lucky they're not waking up in a garbage bin this morning!

Three wins and I'm supposed to like Chris Jones?
Sorry but I still don't and he didn't help with his sleezy 'injured' player tactics yesterday.
As Jones supposedly told Dave Dickensen, "Win with class"

Good point from Mr. Garton. Safe to say most Rider fans are just too cheap to go out and buy another jersey or too dumb to take the nameplate off and put Jefferson on it.


Some guy was trying to do a Tillman on the Lancaster statue and was promptly pushed rudely out of the way. Guy looked like he was already pissed to the gills too and this was at 115.


Best team in the CFL?!!LOL! Are you serious? Look at the standings moron!

Perhaps Jones should pay for acting lessons for his 'injured' players and training staff.


LOL at those talking about the Riders faking injuries.

Like Mike O'Shea is saintly in everything he does. #sourgrapes


Can someone please tell me what the Riders did that EVERY OTHER TEAM has done as well?

and they say rider fans whine

All respect to Mr Lancaster (The Little General), but... The statue doesn't do him justice at his qb player position. Shouldn't he be launching one of his memorable legendary 2 minutes left in the game marching passes for the win once again? He was a great Canadian Football sports hero! Good memories.