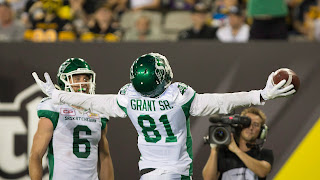 Thoughts from the weekend


-- Ugly wins count too and this one was ugly, but it was big as well.  A big win not just for the fact it put the team at 6-5 on the season, but the fact it was win number 6 on the year with 7 games to play after a 2016 season that saw the team win just 5 times.  Progression!  Like it or not, what Chris Jones is doing is working!

Some have come around to that while others are still resistant too looking to magnify little things and make them bigger than what they are.  The bottom line is even if this team were to lose its remaining games, the record is still better than last year.  Oh yeah, the Riders won't lose all of their remaining games this year.   The plan that was set forth when Jones was hired is slowly coming into place. There will be some bumps in the road yet, but if you haven't realized it yet, better times are coming and we can put the past in the rear-view mirror.

Back to Friday.  Where do you start?


--More football in a moment, but there was another example of an ump/ref having a major impact on a game with once again, the person making the call not having to explain themselves.

That play happened Friday in what was a huge game for both teams and came at a key time in the baseball game. I put it on Twitter last week that the ref who made the "accidental pass interference" call should be held accountable for his decision by having to answer for it, but he is not.  The same applies here with home plate ump Jordan Baker.  The call was clearly a strike, but Baker missed it resulting in the chaos that followed.  Yes, for what its worth, John Lackey (who is not a favourite of mine) was clearly out of line and went wayyyyy over the top.

All that has to be done is for a "pool reporter" who is one of those attending the game to ask the questions that are needed with the response then being shared to all media who wish to have it that were at the game. If the official in question basically says "I missed the call, that one is on me", I'm OK with that because there is at least some accountability happening.   I understand the job of policing and officiating the game is not an easy one, but if the players and coaches have to answer those questions, so should the person making the call.  If that is not going to happen, then players should not face any punishment for criticizing the calls that are made or not made on the playing surface of choice.  The question could also have been asked of the ref in the Eskimos-Argonauts game who ignored a blatant helmet-to-helmet hit on Mike Reilly.  It's not the first time this year that a QB has been hit helmet-to-helmet with no flag flying.  What are they seeing? What did the official who made the "accidental pass interference" call in Winnipeg on Kacy Rodgers see when everyone saw there was no PI at all.  As fans, we deserve an answer. We might not like it, but at least we get one.

--Are we still using injuries for the struggles of the Edmonton Eskimos? I think we can a little, but I think we are also seeing some weaknesses on that squad. One must remember that while they have had terrible luck on the injury front, they have still had their leader in Mike Reilly. Some will say they have been snake-bitten while others will say they aren't surprised.   At this time of year, coaches rarely have the opportunity to have the lineup they want due to injury, but Jason Maas certainly has some work to do.

-- How much longer does Darian Durant have? The guy Kavis Reed wanted didn't even make it out of the first half on Sunday.  There is no doubt DD has not lived up to expectations in Montreal, and there is now no doubt Chris Jones made the right decision in whether or not to keep him. With Drew Willy being inserted so early, has Durant lost his job as the #1 guy.  If it is, it will make for an uncomfortable night for him when he returns to Mosaic.

--In the wake of the latest announcement coming from the CFL about the schedule and padded practices, I will just ask the question that has been asked before. Why was Randy Ambrosie passed over for Jeffrey Orridge and where would we be if Orridge was still in charge?


--Congrats to both the Rams and Thunder who won at Mosaic Saturday.  The Rams knocked off Alberta while the Thunder got a late TD to get past Winnipeg.  I know Rams HC Steve Bryce was not happy with the effort his guys put out because standing on the field post-game, you could hear him chewing out his squad for their performance.  I don't know what Thunder HC Scott McAulay was saying after the game, but I'm guessing he couldn't have been 100 percent pleased either. Part of the reason for that and for Bryce as well would be the amount of penalties.

Yes, they say you could throw a penalty flag on any play in football, and that adage was correct in these two games as both were marred by penalty after penalty after penalty after penalty after===well you get the idea.   As one person stated to me after the Rams game was over, if this is what the CFL has to look forward to when it comes to work of the stripes than there are problems.  Yes, flags have to be thrown when there is an infraction, but I find it hard to believe the four teams on the field at Mosaic Saturday night were guilty of everything being tossed.  If they were, then some serious coaching has to be done to address the topic by all involved. This is where the evaluation process is key.

--Connor McDavid told reporters as Oilers training camp started that he expects to be better this season.. That is not good news for the other teams in the NHL, but I'm OK with that.

--Whoever in the NFL authorized the death of "Sunday Ticket" in Canada for DAZN should be fired.  I didn't get DAZN because of less than stellar reviews, and truthfully I'm glad I didn't, but Sunday Ticket was perfect for NFL fans who wanted to check out all the games. I don't know if this deal is a one year one, but I'm hoping it is because despite the fact I can't see all the games, I'm not wasting my money on something that is not delivering as expected.

--Why is it you just know when the Patriots lose that Tom Brady is going to take out on whoever is next. That 1st half performance by TB12 with just three receivers in the lineup was sick. Sorry New Orleans! You were in the wrong place at the wrong time.

Other thoughts from Week 2 of the NFL

-- RIP Bobby Heenan. Perhaps the best manager and definitely one of the best if not the best talker. Some of his commentary was the stuff of legends. The work he did with Gorilla Monsoon on the mike when wrestling's popularity was at an all-time high was gold. There was NO ONE better than Bobby "The Brain" Heenan.  No one!


There was no one like Bobby Heenan behind the mike! Go back and watch some of the PPV's he did in the 90's for lines and actions that were second to none. #RIPBRAIN


Durant is on his last legs. Those who were up in arms over the move to get rid of him here let their emotion get in the way of reality. Thankfully, Jones is smarter than 80 percent of the fanbase here.

As for the Riders, progression is happening. This team should finish 3rd in the West. The injuries and the lack of 2nd half production is concerning again because it doesn't seem like adjustments are being made at the half. The key word is progression though. It is happening!

I agree with you on the penalties called at the two football games Saturday, but at what point are players on teams going to recognize and adhere to no yards rule. Was there one punt in either of those games were no yards wasn't called.

I can understand one or two, but are players not getting the message about 5 yards? That is on coaching.

Happy happy happy... that useless "Darian Durant choose to sign" with someone other than the Roughriders, sooooo happy, he's not worth the money. Waiting on Kavis to make phoney (excuses) injury report any minute any day now letting Durant off the hook for his dismall season. Pathetic player skills resembling zero!

I get Bridge played well, but it was Hamilton. If he does that against Winnipeg or Calgary, I pay attention. Can he do it again next week? STay tuned!

Why do you and Pedersen keep trying to talk your readers and listeners into liking Chris Jones?
The Riders could win five consecutive Grey Cups under him and I still wouldn't like him.

We have a Brendan lover on the blog. Some sage advice - GFYT