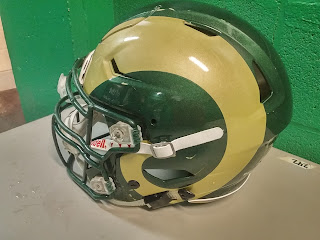 It was a game that at times more closely resembled a basketball game than a mid-season football game, but the University of Regina Rams were finally able to come away with a 58-55 double-overtime victory over Alberta on Saturday at Foote Field.

After both teams scored majors in the first overtime, the No. 8-ranked Rams got a big break in the second overtime when Brent Arthur’s field goal attempt for Alberta from 41 yards out glanced off the right upright. That meant the Rams only needed a single point to win it, and they got three when Daniel Scraper punched a 26-yard field goal right down the middle to put an end to the third highest-scoring game in Canada West history.

The win improves Regina’s record to 4-2 on the season and the Rams lock up a postseason berth thanks to Calgary’s win over Manitoba.

“They’re a formidable opponent and we knew they were going to be with the way they can run the ball,” Rams head coach Steve Bryce said. “Records be damned, we knew we were in for a battle and that’s exactly what happened today. Our boys played tough for four quarters and beyond, and hats off to the U of A because their players did as well.”

Not surprisingly given that it was the most combined points ever scored in a game involving the Rams and the most points they’ve ever scored on the road, a monumental list of individual accomplishments piled up during the afternoon. Atlee Simon became the University of Regina’s all-time touchdown king after a career-long 53-yard rush for a major in the first half, and Mitchell Picton passed Chad Goldie as the school’s all-time leader in touchdown catches after hauling in the 22nd of his career for the Rams’ first points of the game. Noah Picton tied former Rams quarterback Teale Orban for Canada West’s all-time lead in completions and and also needs just 18 more passing yards to surpass Orban for first in conference history in that category as well.

Simon had a huge outing for the second consecutive game, finishing with 25 rushes for 206 yards as well as catching five passes for a total of 59 yards to set a new career high with 265 all-purpose yards in the win. Two of his catches were for majors and the fourth-year running back added one more touchdown on the ground, marking the sixth time in his Rams career he’s finished with at least three scores.

Noah Picton, who completed 34 of his 45 pass attempts for a total of 386 yards and four touchdowns while also running one in himself, hit Mitchell Picton and Ryan Schienbein for majors in addition to the two to Simon. Schienbein was the team’s top receiver with 10 catches for 112 yards, while Picton had six catches for 102 yards and Kyle Moortgat accumulated 90 yards on his nine catches.

In perhaps the unlikeliest touchdown scored by the Rams in recent years, they also scored a third-quarter touchdown on a pass from short-yardage quarterback Frankie Gray to defensive lineman Eric Wicijowski. It was Wicijowski’s first career touchdown, and Gray’s first touchdown pass since he connected with Connor Haas in a game way back during the 2012 campaign.

The Rams forced five turnovers in the victory, three of which came off interceptions by Nick Cross, Polis Koko, and Braedy Will. Nicholas Dheilly had a big late forced fumble for the second consecutive game, knocking the ball loose from Ilnicki deep in Rams territory and into Cole Benkic’s hands with under five minutes to go. The Rams also had a turnover on special teams when Ryder Varga – playing his first career game – knocked the ball loose from Alberta’s Nathan Rowe on a punt return with Will there for the recovery.

Rowe finished with nine catches for a game-high 230 yards and two big touchdowns for Alberta, hauling in 54-yard and 67-yard passes from Brad Baker for majors. Ilnicki had another massive game for the Golden Bears, rushing 32 times for 201 yards and a touchdown. Tylor Henry and Adam Zajdel also had touchdown catches as Baker finished 26-for-47 for 437 yards and four touchdowns.

The Rams will now prepare for a showdown against No. 2-ranked and unbeaten Calgary next Saturday afternoon (2:00) at Mosaic Stadium. The Dinos improved to 6-0 after their tight 36-27 win over Manitoba today.

MOMENTUM SWINGS
Alberta was quick out of the gates, scoring the first 10 points of the game and leading 18-7 at one point early in the second quarter after Baker found Zajdel from 14 yards out. But the Rams outscored Alberta 21-1 the rest of the quarter, getting touchdowns from Schienbein and Simon and adding a one-yard run from Noah Picton on the last play of the half to take a 28-19 lead into the break.

It looked like the Rams might have been off to the races after they scored on their opening possession of the second half to go up 35-19, but Alberta had other ideas. They scored 16 points in a span of just three and a half minutes to tie up the game, including majors by Rowe and Henry and a conceded safety by the Rams.

That paved the way for the Wicijowski touchdown, and after a pair of fourth-quarter field goals by Scraper put the Rams up 48-36 it looked like the U of R might be able to outlast the Golden Bears in regulation. But that would make things far too easy, and Alberta got – in order – a conceded safety, an Ilnicki touchdown, and a 39-yard field goal with 15 seconds left to tie it up.

The first overtime saw the Rams start out with a quick-strike offence that put them in the end zone off a completion to Moortgat, a 19-yard Simon rush, and a touchdown pass to Simon. The Rams put Alberta in peril after a Dheilly sack put them into a 3rd-and-21 situation, but Baker found Rowe for a 41-yard completion that set up Ilnicki’s second touchdown run of the game and pushed the game to the second overtime.

NOTES: The 58-point outburst represents the most points ever scored by the Rams in a road game and is tied for the second highest single-game total in team history ... the Rams also scored 58 in a win over Saskatchewan in the 2001 Canada West semifinals ... the team record for points in a game is 59, also set during the 2001 season in a 59-21 win over UBC.


If Simon is on his game, the Rams are that much more dangerous on offence. It's no coincidence they have put up back-to-back 50 point games since he has gotten back on track.


Let's be honest. If the Rams are giving up 50 to Alberta, they will not do well against Calgary or UBC. That might be the last win of the year!