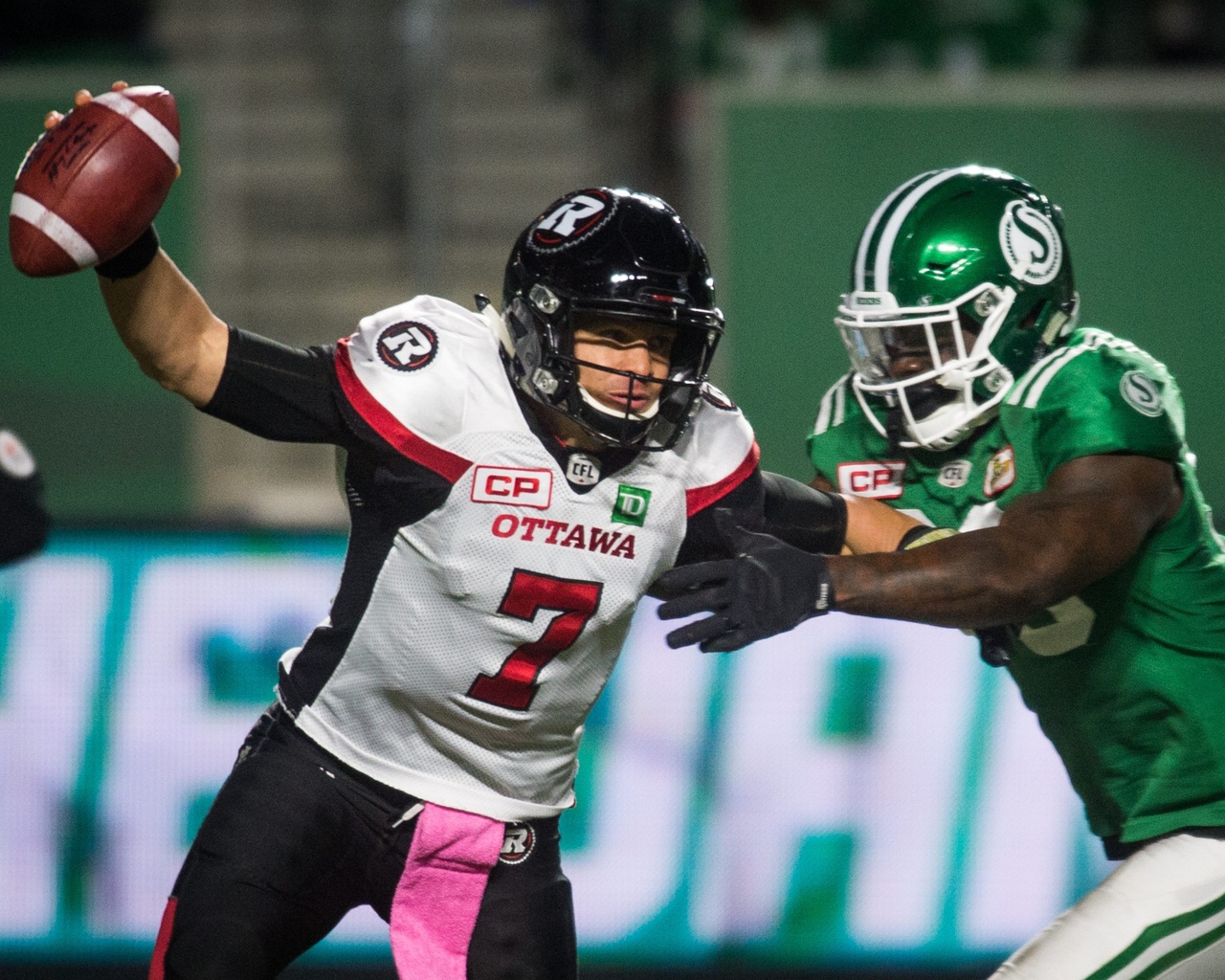 Talk about a gut-punch, but it is one you could see coming considering the opponent.

I knew the Ottawa REDBLACKS were going to give the Riders a tough game, and I knew it would come down to the final seconds.  The Riders "D" was called upon to stop Ottawa, but like Toronto's defence did with the game on the line last week (and I guess again this week), they failed as instead of the Riders getting a last second TD to win, it was Ottawa.

Here are some thoughts on what transpired

Can someone in the CFL office explain why you would have the Argos in Edmonton on a Saturday night at the same time as the Leafs are playing Montreal on Hockey Night in Canada? That does nothing to increase interest in the Argos.  Why wouldn't you have that game in the afternoon?

While it wasn't nice to see the Eskimos win, it was nice to see John Chick win a game for the first time this season and make an impact play to decide the game.  He isn't what he used to be, but he still has plays in him.  I have to wonder what his future is in the league after being a healthy scratch in Montreal. I am guessing he won't be back in Edmonton next year.

South of the border, and oh my goodness, how things can change with one snap.  There won't be many happy Green Bay Packers fans today after hearing Aaron Rodgers may be done for the year with a broken collarbone.  With that, the Packers can be likely removed from any Super Bowl talk.  Would they call Colin Kaepernick? Would they try and make a trade with the Giants for an aging Eli Manning who might be done. How about Phillip Rivers?  Rivers still has some time left, but Manning is running out of it.  What would it cost the Packers? Would the Giants want Brett Hundley? Speaking of the Giants, how about that effort in Denver without any of their main receivers.  It was great to see Michaels and Collinsworth give a lot of love to former Ram product Brett Jones.  They must have been grinning from ear-to-ear in Weyburn. Why wouldn't they?

Can the NFL simply relegate the Cleveland Browns? My god, they are disgusting!

Pittsburgh's loss to Jacksonville last week removed many from Survivor pools. Did the losses by Atlanta, Green Bay and maybe Denver basically bring those pools to a handful of players left.

--I don't know how many people would have seen the Regina Rams-Alberta Golden Bears football game Saturday, but those who did saw the best football game of the weekend.  It was Madden-like as both teams marched up and down the field. In the end, Regina won it 58-55.  It was a lot of fun to call with big plays from both teams.  Games like that are so much fun for so many reasons.  The win clinches a playoff spot for the Rams.  Calgary will be here next weekend in a game that will be very tough for Steve Bryce's crew, but if the offence can keep going the way they are, they will have a good shot at pulling off what many would consider to be a upset.  A few in Edmonton said after, the Hardy Cup will be between the Rams and Dinos. I think UBC might have something to say about that and the Huskies might too.

--For the umpteenth time, the PFC final will feature Regina vs Saskatoon as the Thunder and Hilltops both pulled out semi-final wins with Saskatoon winning at home and Regina going up to Edmonton to take on the Huskies. Safe to say that Gordie Howe Bowl may be the place to be for football next weekend.

--It's obvious now that trading Jordan Eberle has had a disastrous effect on the Oilers. (sarcasm off)  No doubt that they are the biggest disappointment early on in the NHL season---a season that admittedly is less than two weeks old.  That effort against Ottawa Saturday night was the second Saturday night stinker Edmonton has had this season. That was ugly!

--Are they planning the parade route in Vegas yet? We knew the team would be better than the expansion teams, but were we expecting this? I'm not calling them a playoff team yet. It's far too early for that.

--The Edmonton Oil Kings have a kid on their team named Connor McDonald. Yeah, that can't be too difficult playing hockey in Edmonton with a name similar to you know who.  While they weren't convincing wins, the Pats have won two games since John Paddock and the coaching staff let them know what they thought of their game against Saskatoon last week. Time will tell if that calm level-headed rant Paddock delivered both after the game and to me the next day will have long-lasting benefits or not. Early on, it seems to have wakened the squad up albeit the two wins have come in overtime.

--Speaking of ugly, the Cubs bullpen let another one get away and it is starting to look as if the Dodgers will not only wrestle away the National League title from Chicago, but perhaps the title of "World Series Champion" as well.  If you can't hit, you don't win.  The Cubs simply can't get hits off the Dodgers much like Washington couldn't get hits off of Chicago in the Divisional Series.  The Dodgers have a deeper bullpen and a better bullpen than Chicago so once the starter leaves, they have the advantage.  The Yankees are also having a problem getting bat on ball as Justin Verlander proved Saturday in Game 2.  Both New York and Chicago go home now, but it is going to be tough to win 4 of 5 to move on for both.

--For yours truly, the WWE couldn't have picked a worse time to come to Regina after many years as they were at the Brandt Centre while I was in Edmonton with the Rams. By all accounts, it was a great night and hopefully they will be back a lot sooner than the last period between visits. Hopefully, I will be able to make that one.

Great point on who convinced Jones to challenge. There was nothing there! What a waste! That needs to be and should be addressed!


This Pats team looks nothing on the blueline like last year. Nothing against Davidson and Smart, but that is not the role they should be in. Oksanen is great, but Zamula can go back home. Lot of work needs to be done between now and trade deadline.


I'm with ya on Carter. Guy needs to dial it down at times, but his demeanour didn't affect his play. Would have been nice to see him score on that one play instead of trip on his feet as that might have turned a loss into a win.

At the end of the day, bad playcalling down the stretch and an inability to get into the endzone took this one away from us. Just a bump in the road---a road that likely takes Riders to the east.


It came down to defense having to stop Ottawa from scoring with not much time to go from 83 yards away. They failed. Not the first team to do that, not the last. Give credit to Harris for making the plays necessary to win.

What does McAdoo have against running the damn football. Richardson was a bull and in the final two minutes, you throw two passes? That's inexcusable! One first down and that game is likely over. No, let's stop the clock by throwing two incompletions. Stupid, stupid, stupid!

Would Bridge have fared any better?


At what point do the Pats go out and get Jake Bean? They need someone like him in the lineup if Hobbs isn't coming back, and he isn't.


That challenge was terrible. A complete waste! He is looking at the tablet. What did he see?


That column is one of Vanstone's better efforts in recent memory. What that shows me is the complete lack of playcalling by McAdoo. He has been in this league for how long? Campbell and crew outcoached Jones and crew.

At the end of the day, the D has to come through and make a game-ending stop, but the offence shouldn't have put them in that position. Put the blame on McAdoo and not Glenn.


WTF is with Carter? Has he left?