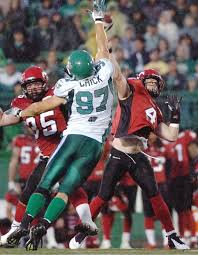 John Chick is hanging up the helmet.

The three-time CFL all-star and the league's best defensive player in 2009 made the announcement on Friday.


"It has been an absolute privilege to football at all levels and an amazing honour to have been part of the CFL and its history," Chick said in a release. " I have always given football my all as it should be given nothing less and regardless of what stage of life I'm in, I will continue to do so.

Most of Chick's CFL career was spent in Saskatchewan as he played for six years with the green-and-white.  The 35 year old  also spent three seasons in the NFL and finished off his career in Edmonton after a trade with Hamilton late last season.


Can't help but notice the uber-religious John Chick retires on Good Friday! Thank you for your service to the Riders John!


Would have been great to see him sign a one-day contract and retire as a Rider. Can we blame that on Jones?


One of the best to ever play on the Rider DL! Would have loved to seen him come back for one more year in a Rider uniform.


What did he do better? Sack quarterbacks or make kids!