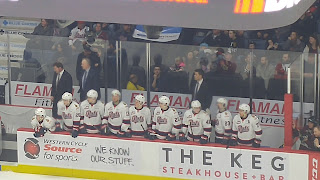 --The Pats-Broncos series is now a best of 3.  Regina beat Swift Current 6-3 in Game 4 of the series as Jake Leschyshyn scored twice including one into an empty-net. Game 5 will go on Friday. Other winners in the East were Moose Jaw, Brandon and Red Deer while Portland and Tri-Cities won out West

--Break up the Coyotes.  After beating the Eastern Conference's top team---the Tampa Bay Lightning 4-1 this week, Arizona walked into Vegas and beat the Knights 3-2.  Vegas is 3rd in the Western Conference behind Nashville and Winnipeg.

--The National Hockey League's last overall team will have better odds of winning the draft lottery next month. The league confirmed Wednesday, the team with the worst point total this season will have an 18.5 per cent chance of winning the annual draw, which will take place on Saturday, April 28.

The full breakdown of percentages for non-playoff teams for the 2018 Draft Lottery are as follows:

--Play Ball!!!  The 2018 Major League Baseball season opens Thursday with the first game going in Miami as the Marlins entertain the Cubs.  The Blue Jays will honour Roy Halladay and retire his number 32 jersey before getting the season started against the New York Yankees.

--Johnny Manziel spoke with TSN's Dave Naylor on Thursday. He says he followed the CFL last year and that he has friends that play in the league. He says it's not the NFL, but it is not a slouch gimmick league.  He says everything is going to work itself out and he is ready to put the work in


Paddock needs to call the WHL office with tape of the so-called "penalties" in the 3rd period. What the hell was that all about?

Great concept this - What Did You Miss on _
Thanx Mr. Mitchell Blair for the sports info!